Posted by Supertradmum
Thanks to Blog of a Country Priest and God loves people, joy and dancing......

Matt has charities you can give to as well...check them out. http://www.wherethehellismatt.com/give

SS. Thomas More and John Fisher at the "end point of the Reformation" 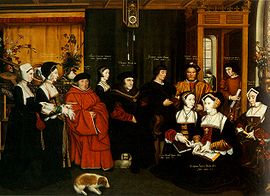 Father Edward Holloway, of the Faith Movement in England, coined the phrase used by the priest at Mass this morning, regarding this feast day of SS. Thomas More and John Fisher.

"The end point of the Reformation", the phrase used by Fr. Hugh, refers to the fact that England is still reeling from the secularization and fragmentation of Faith brought on by Henry VIII's break with Rome, and with morality.

Indeed, it was not only Tradition that was broken by the English Revolt, but the cultural positions on morality and ethics, pushing the English into a relativism and individualism the results of which we see today in society.

Nothing is new and all have roots in sin and degradation. That a society with law and juries would put to death such lights of Europe at Thomas More and John Fisher created a schizophrenia of justice and a break with the Greco-Roman tradition of law and order impacts us all in the West today. 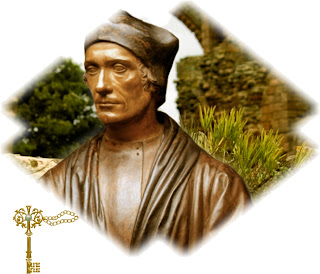 Lutheranism would have remained a continental aberration and may have even faded if Henry and those who sought riches and new positions of aristocracy, by stealing from the Church, had not been the opportunists of the day. Power, money, titles became more important than prayer, fasting, obedience to Holy Mother Church and the Representative of Christ on Earth, Peter, the Pope.

To state that we are still experiencing the Reformation, or Revolt, as I prefer to call it, is an insight into the long arm of evil reaching down into our present day--the results of the Revolt were the Enlightenment and the relegation of the Catholic Truth into private lives and out of the public domain. This was the continuation of Machiavelli's real politique, not invented by him, but defined, and part of the reality of English history, up to the present time. The modernist heresies are all embedded in this Revolt, as well, with Tradition and authority undermined to the point of complete disdain for the Scriptures and the Liturgy as well as the Vatican.

The fight continues and we shall see more martyrs, some "green" and some "red". Suffering for the Faith is the test of the real Catholic. If you are not suffering for your Faith, at this point of the Reformation, you are not living your Faith.

I would like to quote Michael Davies as well today, as it was not the people who wanted change, but one leader and his minions:


If the Protestant claim that because the Reformation in England happened it must have been both necessary and wanted is incorrect, then why did it take place? The answer is simple. The innovations in both doctrine and liturgy during the reigns of Henry VIII, Edward VI, and Elizabeth I were imposed on the people from above without any evidence of popular support for the changes among the people. The Protestant historian Sir Maurice Powicke accepts this unequivocally: "The Reformation in England was a parliamentary transaction. All the important changes were made under statutes, and the actions of the King as supreme head of the Church were done under a title and in virtue of powers given to him by statute." 31The only instance of such popular support for religious change in England was for the restoration of the Catholic Faith during the tragically brief reign of Mary Tudor. Another Protestant historian, Professor S. T. Bindoff notes that soon after Mary's accession to the throne in 1553: ". . . the Mass was being celebrated in London churches 'not by commandment but of the people's devotion', and news was coming in of its unopposed revival throughout the country." 32 Catholicism flourished once again in Mary's reign. http://www.catholictradition.org/Saints/john-fisher5.htm

Also from Davies book, two notes which caught my eye--one, that John Fisher was ordained at 22, with a Papal Dispensation. Happy event! The second was that one of his sisters, Elizabeth, a Dominican nun, refused to take the Oath of Supremacy, and fled England, living and dying on the then island of Zeeland, part of the Netherlands. We do not know anything about her, but she had to become an exile for her faith in the Primacy of Peter.


We have a leadership crisis in the Church world-wide, but especially in GB and America. Let us pray to these great men whose feast we celebrate today, June 22nd, for leaders, both lay and clerical. Otherwise, the end point of the Revolt will end in a desiccation in the Church--a worse scenario than under the "reforming" Tudors.

SS. Thomas More and John Fisher, pray for us. And, happy name day to my son. 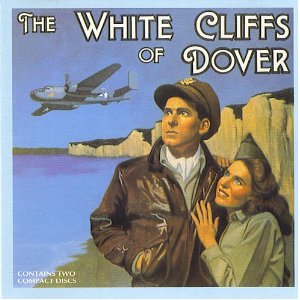 My mini-poll is giving me interesting results. I have been writing to women, with some articles on men,  but may have to include more "guy stuff". I knew I had sems and male collegians reading, as some have written to me. However, as men are, or should be the leaders of their families and the leaders in our Church, specifically in the hierarchy, I shall think and pray about posts. I do have several on men, which some have commented on in the past.

My series on the Pope's encyclicals on love and the posts on not being afraid to commit, as in this week's posts, are directed to men and women, but men specifically.http://supertradmum-etheldredasplace.blogspot.co.uk/2012/05/on-love-and-answer-to-socialism-part.html

That series is quite long.

Having a think....but of course, I know men like to learn about women as well. We are such a mystery. And, if there ever was a time to combat the growing and pernicious move towards androgyny in our culture, is it now.

Specific guy posts from the past: http://supertradmum-etheldredasplace.blogspot.co.uk/2012/05/protectors-predators-and-peter-pans.html

St. Etheldreda, Pray for Us

The Feast of St. Etheldreda, Patroness of this blog, is June 23. I place a link here on her biography, and a prayer from that link. I pray for all my Anglo-Catholic friends, and for the Ordinariates across the world. As we do not have a Saturday morning Mass tomorrow, I place her prayer here today.


Eternal God,
who bestowed such grace upon your servant Etheldreda
that she gave herself wholly to the life of prayer
and to the service of your true religion:
grant that we, like her,
may so live our lives on earth seeking your kingdom
that by your guiding
we may be joined to the glorious fellowship of your saints; through Jesus Christ our Lord. Amen.

On the Wedding Feast at Cana and Midsummer Marriages 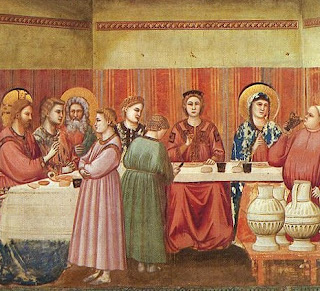 In the old days, Midsummer Eve was the traditional day for marriages. As the longest day, celebrations in England could go into the later hours. We have many examples of this custom in art and in literature, with Shakespeare's famous play, A Midsummer Night's Dream, being only one and The Midsummer Marriage by Tippet being another. I have been thinking of how and when Christ began His public ministry-with the changing of the water into wine at the Wedding Feast of Cana. The significance of this event is more than I could cover in a little post. The entire scene reminds one of the final day of the Coming of Christ for His Church, the New Jerusalem, us...

Catholics sometimes forget that Mary was married, even though she lived in celibacy. Mary was married and experienced what every bride does on her wedding day. The Jewish customs are not our Western ones, but we can imagine the shock and humiliation of running out of food and drink at the reception. Our Lady's love for the family of the bride and groom, and for that newly married couple was the compassion of the Immaculate Heart. She asked her Son to intercede, as she does daily, for us. He did, as He, Christ, the Son of God and the Son of Mary, would not refuse her anything.

Some Orthodox commentators claim that the groom was one of the followers of Christ. It does not matter to me whether the bride and groom were related to Christ and Mary, or were friends, or a disciple. We are all one in Christ.

Jesus is the Bridegroom and the Church is His Bride. This is our Faith. He gives us the Wine which is His Blood, as He died and rose again for us, His Church.

Mary intercedes for the Church as well as for us personally. I have friends who see me as an idolater because of my love and my honoring of Mary. Mary was answered by Christ at the Wedding Feast. He answered her call for compassion in the face of humiliation.

Go to Mary, our Mother and the Mother of the Church. She will not ignore your prayers.

Two other ideas came to my mind on this subject today. One was that the couple did not know that Mary had stepped in and helped them on their special day. The steward and the servants knew what had happened, but the Scriptures do not indicate who else knew. Mary intercedes for us without us knowing. She stands with Christ as our Co-Mediatrix of all graces. In Giotto's painting, Mary is with the steward and waits, like a servant, rather than a guest.

The other idea is that she is aware of our needs even before we are. She stands at the table and is aware, watching, waiting, kindness exuding from her innocence and purity.

How can we not go to Mary? 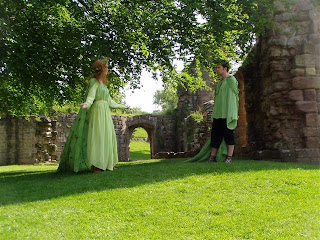 If a reader would like to identify the older man with the halo in this famous painting, that would be helpful...Is it Peter? And, here is Shakespeare's play done at Fountains Abbey in Yorkshire, my most favorite place in the whole world, I think....done by The Lord Chamberlain’s Men. 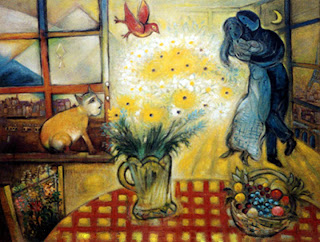 And, here is Chagall's Midsummer Marriage painting...happy thoughts to all my readers today just a bit after Midsummer's Eve. I have seen some of his art and love his birds...


And look at Midsummer here on this blog, the blog of some very special priests....