A nod to David Jones, today-my favourite painter and poet

A few of his prints which I had in my collection were stolen a few years ago, in 2008....they were never found.

From The Sleeping Lord....


Do the small black horses
grass on the hunch of his shoulders?
are the hills his couch
or is he the couchant hills?
Are the slumbering valleys
him in slumber
are the still undulations
the still limbs of him sleeping?
Is the configuration of the land
the furrowed body of the lord
are the scarred ridges
his dented greaves
do the trickling gullies
yet drain his hog-wounds?
Does the land wait the sleeping lord
or is the wasted land
that very lord who sleeps? (SL 1974 96)

Was World War II in vain? Another group is now emerging stronger and stronger against the Jews in Europe.

Two choices for your meditation....rejoice! 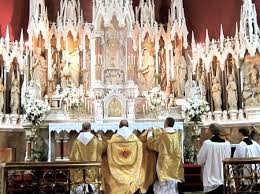 I am begging for a church. If you are a person who wants to help keep a beautiful Church in Dublin open for the TLM and other Masses, please read this.

The Archdiocese basically gave the Latin Mass Chaplaincy a dying parish. It is in an area which is no longer families, but students for the nearby universities. Therefore, the population of the area has changed.

If you are thinking of being a bit more generous to a particular church this season, St. Kevin's is a more than worthy cause. You can go to the website and click on support or merely click here.

All the sacraments from the 1962 liturgical books are available.

The Dublin Latin Mass Chaplaincy was established by Archbishop Diarmuid Martin on 15th September 2007, in response to Pope Benedict XVI’s Motu Proprio Summorum Pontificum, to provide pastoral care for the faithful of the Archdiocese attached to the more ancient use of the Roman Rite, also known as the extraordinary form.

The Chaplaincy is based at St Kevin’s Church, Harrington St, Dublin 8.
As well as regular Sunday and weekday Masses, the Chaplaincy celebrates Baptisms, Weddings, Funerals, and the Sacraments of Penance and the Anointing of the Sick according to the liturgical books of 1962.

Email ThisBlogThis!Share to TwitterShare to FacebookShare to Pinterest
Labels: begging

The miasma of stupidity The Millennials I have spoken with do not understand the concept of "methodology". As part of my major in history, among other degrees, I learned various ways of viewing history. All histories have a methodology. So do teachers of literature and philosophy.

But, in this age of extreme subjectivism, youth cannot see that their professors are teaching out of a particular method, mind-set, philosophy. They think that these teachers are like themselves, without agendas and completely without guile. The relativist has a hard time imagining that there are such things as viewpoints, plans, which is why, in 2010, when I passed out my required syllabi, some of my students were dumbfounded that I had completely, clearly laid out the goals and methods of my courses, the expectations, and the desired results. Stunned. I wrote my first syllabus in 1979. The students wanted to know the methods, goals, rubrics. They loved the guidance as they wanted to succeed, if not actually learn.

By 1997, I could see the difference and by 2010, the students who wanted to learn and get results for themselves and learn how to think and succeed, were few and far between. The relativist cannot learn. He only wants to argue his own, small position and act as if it were not a position and a methodology.

The second problem for these students is that they honestly think that science is the only infallible discipline. They think either in terms of complete empiricism (boring) or they simply memorize and do not think at all.

This is the result of a century of social engineering in education across the world. And, in fact, in some countries, this type of miasma of stupidity owing to the lack of learning critical thinking is worse than in the States or Europe. I find more Asian students who are relativists than those of the West, especially those raised under Marxist rule, which they cannot even parse out themselves.

They cannot recognize either ideology or methodology. Such a society of such an unthinking mass becomes the puppet for whosoever wants to become a tyrant.

American Millennials are less conformist than those of other countries, but the slide into anti-intellectualism has gained momentum.


Some studies have indicated that this generation has trouble solving problems with non-linear thinking. I think they have trouble with both types--see my post last week on Sherlock.