Urban Foxes, raccoons and other creatures great and small

The London Urban foxes do not look like the smaller country cousin versions. These urban opportunists are as large as a medium sized dog and at this time of year, more grey than red.

I saw one last night here in Bayswater limping with a sore paw. It was at least three feet long not counting the enormous tail. We have taken over the natural habitats of these mammals, just as in America, where the coyotes now come into some cities, as well as wolves, (which I have seen in small towns in Iowa in the winter about 12 years ago). 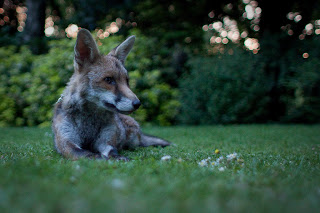 Men and other animals have had a love-hate relationship for centuries. However, one group is becoming extinct and does not have a replacement rate and it is not the fox family. I know they like garbage, but I wonder if they eat pigeons?  Like raccoons in the States, these foxes can be dangerous. Animals are wild, as I remind children, not tame. Urban raccoons have lived in my home city since I have been a child. They have horrible claws and can tear up metal siding on houses to create dens in attics. Last summer, my mother was sitting on a garden bench with her neighbour, in the neighbours' back yard when it started raining baby raccoons. The mother was flinging these now weaned ones out of the attic above the ladies, heads and the young ones were flying over their heads, landing on the grass and toddling away. Then came mom....raccoons can weigh up to 40 pounds, and this maternal example was big. This was not the first time the neighbours had raccoons in the attic. Over a four year period, they had replaced aluminium siding, but the animals tore it back to get inside and have babies; and this is a huge old farmhouse.

Animals may sense that as we lose our ability to control out cities, they can reclaim lost territory....

My son was emptying garbage in DeWitt, Iowa years ago and  he was a small eleven year old. He came in and said, "Mum, there are two large, white fluffy dogs over by the dumpster." I knew these were not dogs. The snow had come, was laying about four feet and higher in drifts, and I told him to stay in the house while I went outside. Two beautiful wolves were standing about two feet from the garbage area. I yelled at them and these noble animals back off. Sadly, the pair ended up killed after a huge snowstorm hit the area and semis were in the ditches.. Animals cannot deal with highways or heavy traffic. I saw one dead on the side of the road about a month later and the other shortly  after that.

In the summer of 2010, in northern Missouri, close to the Iowa border, we saw a black bear. That is the furthest south I had ever seen one, or north, if one had seen them in the Ozarks area. The population is growing. I had seen these in northern Wisconsin, up by Rhinelander and near the Wisconsin-Minnesota border. But, to see a fair-sized bear in Missouri, scratching its back on a tree on a small farm by the side of the road was a first for me in that area.

Cougars have been coming into towns and cities in some Canadian and Northwest cities in America, and other cats are making a comeback. Bobcats had seemed to have disappeared since my adolescence in Iowa, but are now seen more commonly in areas where these have not been noticed for years. The movement of animals also has to do with the fact that less people hunt for food and that some animals are protected. Somehow, we need to find the right balance. Bobcats are beautiful animals and solitary. One rarely sees more than two. Can the elk and bison come back as well, I wonder. The deer are plentiful, and we saw them daily in DeWitt or on the outskirts.

I include an older video of Bald Eagles. My son and I have seen hundreds at one time up by Bellevue, Iowa in January. The sight is awesome.

Article states it is not clear what caused this attack

Posted by Supertradmum
Does the secular world want to ever admit that Christians are targeted for persecution? It is the duty of Catholics to not pretend, either, and pray for our brothers and sisters in Nigeria. The Tyburn nuns here have been asked to set up a convent in Nigeria by the Bishops. Construction of the building has begun.

Gunmen attacked a church in northern Nigeria during a midnight mass on Christmas Eve, killing six people including the pastor, before setting the building ablaze, residents and police said Tuesday.

By FRANCE 24  (text)
Gunmen killed six people attending midnight mass at a church in northern Nigeria on Christmas Eve, police and residents confirmed on Tuesday.
“A group of gunmen came into the village at midnight and went straight to the church... they opened fire on them, killing the pastor and five worshippers. They then set fire to the church," said Usman Mansir, resident of Peri village, near Potiskum, the economic capital of Yobe state.
Mansir specified that a branch of the Evangelical Church of West Africa (ECWA) was the congregation that was targeted.
A senior police official in Yobe confirmed the details to AFP, but declined to be named.
Boko Haram Islamists have carried out several attacks in Yobe, which borders the state of Maiduguri, where the insurgent group is based.
The Islamists are blamed for killing hundreds of people in northern Nigeria since 2009. It was not clear who was behind the latest violence.
While Yobe's population is overwhelmingly Muslim, the commercial hub of Potiskum has a significant Christian minority. Peri is just two kilometres outside the city.

Is this the airport? A Quad-City Tradition and one reason I am in Europe


Snow would have helped the ambiance.....

On individualism and the present generation

Posted by Supertradmum
One of the things about the present generation of youth is that they do not want to be labelled as part of any group.

They cannot identity with being Baptists, or Aristotelians, or even specific sports fans for a particular team. This is a rebellion against the previous generations' ideals of belonging to groups, which was a natural phenomenon. Two generations back, the Baby Boomers identified with a community, and this group does not, and we saw a value in groups, while this group does not. We had a community spirit in the Baby Boom generation which Gen Xers did not have. I have taught both Gen Xers and Millennials and I have great hope for the Millennials, who not only seem less materialistic, but also more capable of making an individual decision outside of a peer group. Interesting.

The Millennials, believe it or not, are less television oriented. If a community is going to grow, it will probably be outside the gate, o They are casting around for communities, They are trying to build communities from the ground-up owing to the fact that this group grew up fragmented families and non-existent communities.

The Millenials, being human, have a desire for community, but do not have the structures we had.

Any group which now exists must be built up from nothing. This is a shock to so many in my generation, where we took many different types of groupings for granted.

The virtual communities are important as so many children and young adults are only children or separated from their families.

One from my generation can only imagine what it must be like to not have the grounding of a community. I wrote in the past few weeks of my social experiences as a teen. This seems so foreign to many youth, who have never experienced organized entertainments or the surrounding formal context of such events. 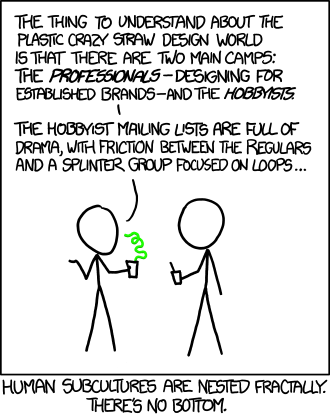 This psychological situation creates both strong-minded individuals and independent minded youth, who are not looking for conformity, nor desire identification in a group.

Therefore, evangelizing this age group must include an engaging of their stark separateness.

To create communities or to seek out existing ones is the challenge of the Millennials.

To evangelize, one cannot appeal to the idea of belonging to a church or a worshipping community, as this is not a value.

To evangelize, one must encounter a need for the personal relationship each of us needs with Christ and preach to that need.

The problem is also that this generation of youth work on line, mostly, and in groups which are on line. To create a real connection to a real group is daunting. Only the courageous takes those baby steps.

Posted by Supertradmum
Marks and Spencers Christmas crackers are the best. We managed to get an entire desk set of crayons, paper, giant clip and other things, as well as golf tees.

The jokes also are better than in other brands.

We played a game called "Call my Bluff" and I won. It is a word game.

Well, Christmas is over for this year and a good time was had by all.

May you all have a great night with friends or family. 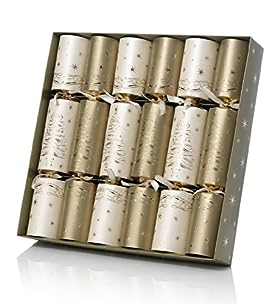