Posted by Supertradmum
20 posts just because I hurt my back and could not go out easily today, and it is WINTER.

Readings from today point to perfection

Posted by Supertradmum
The blessed Agnes spread out her arms and offered this prayer: ‘Holy Father, to you I pray. I am coming to you, whom I love, whom I have sought, whom I have always desired.’ from Vespers

The disciples of John and of the Pharisees were accustomed to fast.
People came to Jesus and objected,
“Why do the disciples of John and the disciples of the Pharisees fast,
but your disciples do not fast?”
Jesus answered them,
“Can the wedding guests fast while the bridegroom is with them?
As long as they have the bridegroom with them they cannot fast.
But the days will come when the bridegroom is taken away from them,
and then they will fast on that day.
No one sews a piece of unshrunken cloth on an old cloak.
If he does, its fullness pulls away,
the new from the old, and the tear gets worse.
Likewise, no one pours new wine into old wineskins.
Otherwise, the wine will burst the skins,
and both the wine and the skins are ruined.
Rather, new wine is poured into fresh wineskins.”

And be ready for the day that the Bridegroom is no longer among us, except in the purity of our hearts........... 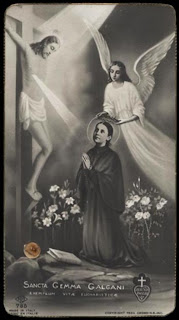 You are a priest foreveraccording to the order of Melchizedek.In the days when he was in the Flesh,he offered prayers and supplications with loud cries and tearsto the one who was able to save him from death,and he was heard because of his reverence.Son though he was, he learned obedience from what he suffered;and when he was made perfect,he became the source of eternal salvation for all who obey him.

Can we do less when praying for friends and family, and even our enemies? Can we do less? Learning obedience and praying....ways to perfection.

Posted by Supertradmum
Again, and on my blog in the past.....if the Catholic school in your area does not make the teachers sign these, do NOT send them there.

From Rorate Caeli: Di Noia Letter to the SSPX