Posted by Supertradmum
The Church of England's House of Bishops has ruled out special services of blessing for married same-sex couples.
The idea was recommended in a report commissioned by the bishops last year.
Clergy will not be allowed to enter same-sex marriages, the new guidance added.
The first same-sex weddings are due to take place in England and Wales from 29 March, but the law specifies that the CofE will not conduct them.
The Church's official teaching is that marriage must be between a man and a woman. Anglican clergy of the same sex are allowed by the Church to enter civil partnerships, but only on the understanding that they will remain celibate.
and
The House of Bishops says in its latest guidance that it is not willing "for those who are in a same sex marriage to be ordained to any of the three orders of ministry [bishops, priests and deacons].
"In addition it considers that it would not be appropriate conduct for someone in holy orders to enter into a same sex marriage."
more here....http://www.bbc.co.uk/news/uk-26206192

Pray for England and Wales, Please

A small bunch of statistics

Posted by Supertradmum
44% of the priests ordained in 2013 went to Catholic Colleges. This is a significant number. If parents are wondering how to encourage a vocation in the family, I would suggest sending your boys to Thomas Aquinas, or Wyoming Catholic, or Christendom, for example.

Do not send your boys to the older Catholic colleges, such as Creighton or Loyola, or Georgetown.

It is the duty of parents to encourage vocations. God gives parents insights into the gifts and calls of their children. If we cooperate, God will bless us and the children.

Vocations are lost in America for several reasons. The first is contraception. How many excellent priests have been destroyed? The second is greed, the desire for money in families, especially in families with businesses which want the young men to take over. The third is a false loyalty to ethnic traditions in families.

54% of Hispanics are now Catholics in the United States (2012), but only 15% of the men ordained in 2013 are Hispanic. http://www.gallup.com/poll/160691/catholic-hispanic-population-less-religious-shrinking.aspx

Problems. Do not be elated about the higher numbers of seminarians in the US. 50% leave before ordination.

Douay-Rheims 1899 American Edition (DRA)
8 In those days again, when there was a great multitude, and had nothing to eat; calling his disciples together, he saith to them:
2 I have compassion on the multitude, for behold they have now been with me three days, and have nothing to eat.
3 And if I shall send them away fasting to their home, they will faint in the way; for some of them came from afar off.
4 And his disciples answered him: From whence can any one fill them here with bread in the wilderness?
5 And he asked them: How many loaves have ye? Who said: Seven.
6 And taking the seven loaves, giving thanks, he broke, and gave to his disciples for to set before them; and they set them before the people.
7 And they had a few little fishes; and he blessed them, and commanded them to be set before them.
8 And they did eat and were filled; and they took up that which was left of the fragments, seven baskets.
9 And they that had eaten were about four thousand; and he sent them away.
10 And immediately going up into a ship with his disciples, he came into the parts of Dalmanutha.
Jesus can take our little gifts and multiply them for His Kingdom.

Narcissism in the Olympics

I am absolutely shocked at the revelation that the American speed skating team did not practice together. Surprise, they have done badly in the competition. But, maybe I am not so shocked after all.

No team can be successful if it is made up of narcissistic individuals.

A team means that people learn to work together, helping out each other to overcome weaknesses and work to strengths.

This article may show us the end of the greatness of American sport in the Olympics.

People growing up in families of one or two do not learn how to work together.

People who only think of their own prowess and their own glory cannot think like a team.

A symptom of our entire nation.

The Precepts of the Church

I. To attend Mass on Sundays and Holy Days of Obligation, and resting from servile works.

II. To observe the days of abstinence and fasting.

III. To confess our sins to a priest, at least once a year.

IV. To receive Our Lord Jesus Christ in the Holy Eucharist at least once a year during Easter Season.

V. To contribute to the support of the Church.

VI. To obey the laws of the Church concerning Matrimony.

VII. To participate in the Church's mission of Evangelization of Souls.

There are seven precepts of Church and all mentioned in the CCC, but not same place.

http://www.vatican.va/archive/ccc_css/archive/catechism/p3s1c3a3.htm  show the first six, including number seven  above.

And the laws of marriage in is this section-http://www.vatican.va/archive/ccc_css/archive/catechism/p2s2c3a7.htm

I wish more priests would preach about these....

Posted by Supertradmum
The odd history of Septuagesima 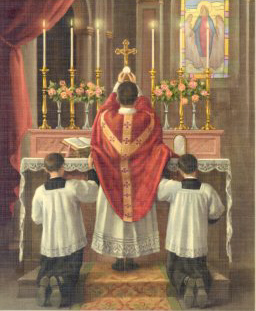 Septuagesima is the ninth Sunday before Easter, the third before Lent known among the Greeks as "Sunday of the Prodigal" from the Gospel, Luke 15, which they read on this day, called also Dominica Circumdederunt by the Latins, from the first word of the Introit of the Mass. In liturgical literature the name "Septuagesima" occurs for the first time in the Gelasian Sacramentary. Why the day (or the week, or the period) has the name Septuagesima, and the next Sunday Sexagesima, etc., is a matter of dispute among writers. It is certainly not the seventieth day before Easter, still less is the next Sundaythe sixtieth, fiftieth, etc. Amularius, "De eccl. Off.", I, I, would make the Septuagesima mysticallyrepresent the Babylonian Captivity of seventy years, would have it begin with this Sunday on which theSacramentaries and Antiphonaries give the Introit "Circumdederunt me undique" and end with theSaturday after Easter, when the Church sings "Eduxit Dominus populum suum." Perhaps the word is only one of a numerical series: Quadragesima, Quinquagesima, etc. Again, it may simply denote the earliest day on which some Christians began the forty days of Lent, excluding Thursday, Saturday, and Sundayfrom the observance of the fast.
Septuagesima is today inaugurated in the Roman Martyrology by the words: "Septuagesima Sunday, on which the canticle of the Lord, Alleluja, ceases to be said". On the Saturday preceding, the Roman Breviary notes that after the "Benedicamus" of Vespers two Alleluias are to be added, that thenceforth it is to be omitted till Easter, and in its place "Laus tibi Domine" is to be said at the beginning of theOffice. Formerly the farewell to the Alleluia was quite solemn. In an Antiphonary of the Church of St. Cornelius at Compiègne we find two special antiphons. Spain had a short Office consisting of a hymn,chapter, antiphon, and sequence. Missals in Germany up to the fifteenth century had a beautiful sequence. In French churches they sang the hymn "Alleluia, dulce carmen" (Guéranger, IV, 14) which was well-known among the Anglo-Saxons (Rock, IV, 69). The "Te Deum" is not recited at Matins, except on feasts. The lessons of the first Nocturn are taken from Genesis, relating the fall and subsequent misery of man and thus giving a fit preparation for the Lenten season. In the Mass of Sunday and feriasthe Gloria in Excelsis is entirely omitted. In all Masses a Tract is added to the Gradual.