Posted by Supertradmum
Pray for Cara, who just died of cancer at the age of thirty.

May God bring her to rest in Him.

A Kudo for Prince Charles

Scary Thoughts on A Thursday

Posted by Supertradmum
I am surrounded in a diocese with a majority of Obama Catholics, including many priests, nuns, and workers at the Chancery who voted TWICE for Obama.

I am surrounded by parish and family members who voted TWICE for Obama.

Do we not need to do penance for these people? Where are the prophetic voices?

May 2009, he stated, "Since President Obama clearly announced, during the election campaign, his anti-life and anti-family agenda, a Catholic who knew his agenda regarding, for example, procured abortion, embryonic-stem-cell research, and same-sex marriage, could not have voted for him with a clear conscience."[52]

Some of you can join the online support on fb-
https://www.facebook.com/Philrobertsonsupport?notif_t=fbpage_fan_invite

Email ThisBlogThis!Share to TwitterShare to FacebookShare to Pinterest
Labels: cute Twenty-five years ago, I lost a friend in Lockerbie.

But, I lost a friend, a beautiful, young, woman musician with a big smile, a peaceful heart, and load of talent in that terrorist attack. 270 died because of that action of terrorism.

At that time, on December 21, 1988, I was in America for parties celebrating my baby son and showing him off to relatives. My husband at the time and I were watching international news on the television when the pictures of the devastated village and the wreckage were being broadcast. We had just flown out of England for this visit a week before, making the entire event even more poignant. We mentioned to each other that we hoped no one we knew was on the plane.

It was not until last January, 1989, that a priest friend of mine told me of my friend's death. When I came back and the academic year started again, I tried to phone my friend many times. But, as she was a young person, I just assumed she was out and about.

At a surprise birthday party for my husband at the time, a small party of about 40 people, I mentioned to the priest that I could not get a hold of Jane. Then he said, "I thought you knew. Did you not know she went down in Lockerbie?"

That was the end of the birthday celebrations for me. Most of the guests had known and a month later, it was "old news". I talked awhile with the good priest, who just happens to be a psychologist as well, as we discussed Jane, her life, her death.

One young voice stilled. She had been on her way to America for Christmas. I had known she was going, and we had agreed to meet up in the New Year. I thought she had left earlier than December 21st.

Jane had been "almost engaged" with a nice young man. I felt for him.

What is hard for me is that with the 25th anniversary coming up, there are so many people who do not know about Lockerbie.

But, then, they did not know Jane. May she rest in peace. She missed her 28th birthday.

There is a scholarship fund which was set up by her parents at Gettysburg College, from where Jane graduated before going to the Royal College of Music in London.

Jane S. Melber (1983) Memorial Scholarship FundEstablished by Theodore W. and Lucile M. Melber in memory of their daughter, to be awarded to worthy and promising students for the study of music in Great Britain.

What is even odd for me is that I have taken that trip from Malta to Frankfurt this past November. That was the way the bomber was able to kill so many people in a more relaxed time of flying. Frankfurt is so big today, I wonder at the ability to stop further attempts.

May we always be ready for death.

The only man ever convicted for the bombing was a Libyan intelligence officer, Abdelbaset al-Megrahi, who was found to have placed a suitcase containing the bomb on a flight from Malta to Frankfurt, from where it was transferred to a flight to London’s Heathrow, before detonating on Flight 103 a little more than half an hour after the Pan Am plane took off for New York. 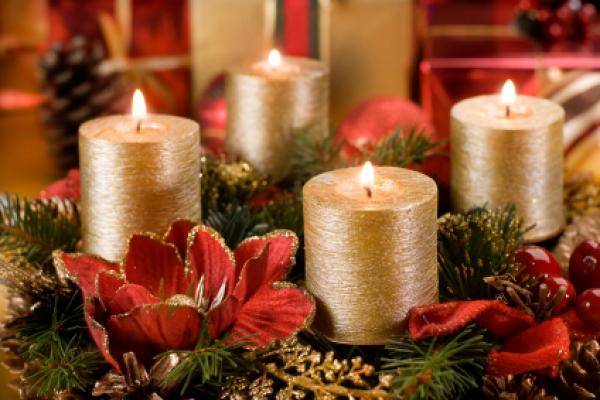 Christmas is coming soon. I witness the craziness of too much solicitude for the outward celebrations, a fact to which I referred in a post yesterday.

But, Christ waits for us to slow down, to reflect, to rest in Him. This takes a bit of time each day. It takes perseverance.

One of the things we learn from the saints is that in order to pursue the Love of Christ, we must have perseverance. Daily, we must choose to do the hard things which bring us closer to God.

St. Therese, the Little Flower knew this. St. Francis de Sales knew this. One must never give up.

For people in my generation and younger, giving up is just one more option among many. People now grow up not knowing what commitment and perseverance are. They have been able to change and make different choices more frequently than in previous generations.

This makes perseverance almost impossible. St. Francis de Sales helps us, but reminding us of where we get our spiritual energies.

Here is a snippet from his Introduction to the Devote Life:

I have already spoken of that mental solitude into which you can retire when amid the
greatest crowd, and furthermore you should learn to like a real material solitude. Not that
I want you to fly to a desert like S. Mary of Egypt, S. Paul, S. Anthony, Arsenius, or the
other hermits, but it is well for you to retire sometimes within your own chamber or garden,
or wheresoever you can best recollect your mind, and refresh your soul with good and holy
thoughts, and some spiritual reading, as the good Bishop of Nazianzum tells us was his
custom. “I was walking alone,” he says, “at sunset, on the seashore, a recreation I am wont
to take in order somewhat to lay aside my daily worries.” And S. Augustine says that he often
used to go into S. Ambrose’ room—his door was open to every one,—and after watching
him absorbed in reading for a time, he would retire without speaking, fearing to interrupt
the Bishop, who had so little time for refreshing his mind amid the burden of his heavy
duties. And we read how when the disciples came to Jesus, and told Him all they had been
doing and preaching, He said to them, “Come ye yourselves apart into a desert place, and
rest awhile.” 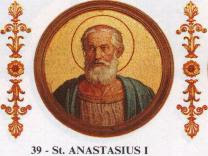 I suggest we all pray to St. Anastasius I, whose feast day is today. He was the pope in troubled times, when various groups ripped apart the various dioceses of the Church.

He was a champion against Origen and Donatism.

The errors of Origen and those of Donatism plagued us still.

St. Anastasius I, pray for us, and for the Church.

We have gone mad!

North Dakota Attorney General Wayne Stenehjem filed a legal opinion last week confirming that the state does not recognize out-of-state same-sex marriages, allowing a man married to another man to come to North Dakota and marry a woman without divorcing his husband.

The problem for most of us is that we identify with our things, especially in America.

It is part of the American Dream to have a house, a car, a chicken in the pot.

But, the Christ, Our Lord Jesus, calls us to the interior life over and over.

We identify too often with what we do, as well.

For example, when I can, I paint. I paint using acrylics, water color, and oils.

I could say I am an amateur painter.

I write. I have been writing all my life, since I could hold a pen or pencil.

I have tons of manuscripts.

But, I am more than a writer. And those "things", the poems, the short stories, the fairy tales, do not determine who I am.

If I hang on to things, it is because I have forgotten who I really am. I am a daughter of the King of Kings and Lord of Lords.