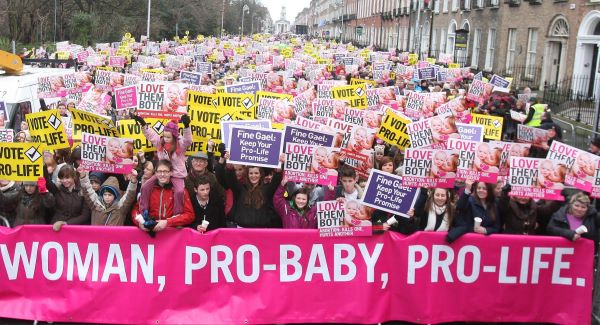 The rally was organised to express opposition to the Government's commitment to legislate and introduce regulations to allow abortion if there is a real and substantial risk to a woman’s life, including the threat of suicide.

Mr Harte told the crowd he was "concerned" at the proposed legislation.

"Ireland is almost unique in the Western world in looking out for, and fully protecting, two patients during a pregnancy – a mother and her unborn child," Mr Harte said.

"We are here to oppose the unjust targeting of even one unborn child's life in circumstances that have nothing to do with genuine life-saving medical interventions".

He continued: "No individual or nation is perfect - we all have our faults and failings but when it comes to life before birth, we have a value system, an ethos which we should proudly share with the rest of the world."

"On a bitterly cold January afternoon when it was predicted that the weather would keep people away, Irish people turned out in many thousands to register their opposition to abortion legislation," Ms Simons said.

Ms Simons told the crowd that claims by the Government that abortion was needed to treat threatened suicide in pregnancy had been "completely demolished at last week’s Oireachtas hearings on abortion".

She said: "The psychiatrists who addressed the hearings were unanimous that abortion is not a treatment for suicidal ideation.

"If the Government legislates for abortion on the basis of the X case, this legislation would cure no woman of suicidal ideation, but it would put some women's lives at risk."

Prior to the rally the Archbishop of Dublin, Diarmuid Martin, held prayers for “the child in the womb” at St Andrew’s Church in Westland Row.

Separately, a new pro-choice group, Abortion Rights Campaign, was also established and held its first meeting in Dublin this morning.

Pro-choice campaigners also held a counter-demonstration in the capital today, with initial Garda estimates putting the attendance at around 200.L

Because of the weather

Posted by Supertradmum
I am taking advantage of the Internet when I can get it.

"Not so Great Britain?"

Posted by Supertradmum
I actually taught Martianus Cappela in the hay-day of my teaching. He developed liberal arts education and here, I list some of the topics of such, divided into the Trivium and Quadrivium.

He defined the seven liberal arts, later divided. We owe a tremendous debt to St. Anselm, who stopped the rot of bad seminary training by introducing these subjects into the seminaries.


Now, when these are no longer taught, a young person is at a great disadvantage. He cannot and does not learn how to think.

That is the purpose of Classical Education-to teach a person how to think.