Matriarchies and patriarchies formed the topic of several discussions this week. A matriarchy is defined as a culture or society, where the political power, including the clan power resides in the female line.

In my travels, I can say that the women of Malta, Ireland and England are in charge of their families. They are, simply, bossy. The men let them rule the home.

This is not true for Asian or other European groupings. My family background is distinctly centred on patriarchies.

This was God's plan for His People, despite the new interpretations of Scripture by the feminists.

The need for a patriarchy was necessary for the developing understanding of God Father and God the Son and God the Holy Spirit.

By accident, I ended up having breakfast this past week with nuns from the LCWR. I shall not give their names or places, but the subject of conversation on their part was the importance of the new, inclusive language Liturgy of the Hours being published under the authority of the Abbot of Conception Abbey.

I do not know if the Creator, Redeemer and Sustainer are still in use.

Several Carmelite Congregations use this one. And, does anyone know what a "sisters' sabbath" is, as at The Order of St. Helena, the Episcopalian order of feminist nuns? 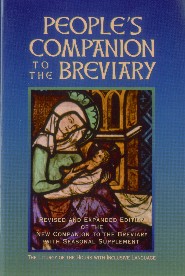