A Reminder of A Great Document


When the Book of Genesis speaks of "help", it is not referring merely to acting, but also to being.Womanhood and manhood are complementary not only from the physical and psychological points of view, but also from the ontological. It is only through the duality of the "masculine" and the "feminine" that the "human" finds full realization.
8. After creating man male and female, God says to both: "Fill the earth and subdue it" (Gen1:28). Not only does he give them the power to procreate as a means of perpetuating the human species throughout time, he also gives them the earth, charging them with the responsible use of its resources. As a rational and free being, man is called to transform the face of the earth. In this task, which is essentially that of culture, man and woman alike share equal responsibility from the start. In their fruitful relationship as husband and wife, in their common task of exercising dominion over the earth, woman and man are marked neither by a static and undifferentiated equality nor by an irreconcilable and inexorably conflictual difference. Their most natural relationship, which corresponds to the plan of God, is the "unity of the two", a relational "uni-duality", which enables each to experience their interpersonal and reciprocal relationship as a gift which enriches and which confers responsibility.

Shades of this blog! I have many article on this point. Remember, all the problems in England started with someone wanting an unlawful, in the eyes of God, marriage. Maybe reading the Michael's text, rather than listening, will bring it home.

Please, American Catholics, wake up! Sacred Heart of Jesus, have mercy on us. 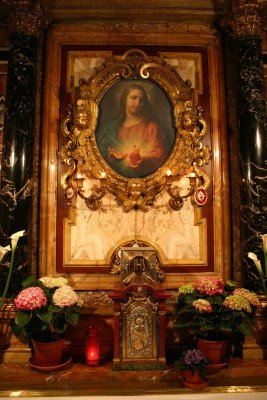 My prophecy years ago

Europe will fall into anarchy and America into tyranny.

Some people are waking up. 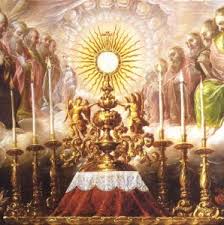 Old Reminders from An Ex-Teacher

Posted by Supertradmum
If you have not read this book, do so now.

Etheldredasplace: The Importance of the Vatican State
23 Feb 2012
... the list is long. St. Thomas Becket, pray for us. I have suggested before here, all reading Robert Hugh Benson's Lord of the World, for another perspective on the importance of the independent Papacy, until the end of time.
http://supertradmum-etheldredasplace.blogspot.com/


Etheldredasplace: A Switch in Attitude
15 May 2012
Yet another far-reaching view was Robert Hugh Benson's excellent book Lord of the World, mentioned before on this blog and written in, wow, 1907. Pay attention, as the man or woman who will supposedly bring peace to a ...
http://supertradmum-etheldredasplace.blogspot.com/

Etheldredasplace: Hello from the city
16 Nov 2012
In the meantime, get and read two books--Robert Hugh Benson's None Other Gods, and Lord of the World. And a special note to Therese and Anita; everyday time we sang the blessings for our absence sisters, I prayed for ...
http://supertradmum-etheldredasplace.blogspot.com/

Etheldredasplace: MachoMan speaks..
12 Sep 2013
And, I must add that we need to beware....read Lord of the World. New York Times. 'Recent events surrounding Syria have prompted me to speak directly to the American people and their political leaders. It is important to do ...
http://supertradmum-etheldredasplace.blogspot.com/

Etheldredasplace: From two excellent sites--persecution ...
17 Oct 2013
They've sacrifices their collective sovereignty, for the EU, a concept Robert Hugh Benson talked about in Lord of the World, a book amazingly prophetic, when compared to "times like these..." People need to take this story ...
http://supertradmum-etheldredasplace.blogspot.com/

Etheldredasplace: Coming to A Head
30 Nov 2013
For years, and those who have read this blog know this, I have been recommending Robert Hugh Benson's Lord of the World. The recent Belgian bill on child euthanasia and some things happening in America make me ...
http://supertradmum-etheldredasplace.blogspot.com/

Etheldredasplace: A Quiet Masterpiece
30 Nov 2013
The choices Frank makes are those contrary to the world, the flesh, and the devil. His choices reveal his ... Supertradmum said... Thanks, James-it is not as dramatic as Lord of the World, but it is seriously a guide to holiness.
http://supertradmum-etheldredasplace.blogspot.com/

Etheldredasplace: Notes on John Holden today
21 Jan 2014
I almost insist people walk through any shopping mall on a Saturday afternoon and observe how far people have strayed from anything close to Holiness. Might I add reading Fr. Robert Hugh Benson's "Lord of the World" as ...
http://supertradmum-etheldredasplace.blogspot.com/

Etheldredasplace: On storms and abortion....and money
13 Jun 2013
This is one prophecy that Robert Hugh Benson got wrong in his great book, The Lord of the World. One hundred years ago, although he could imagine Great Britain turning evil, he could not envision Ireland doing so. Tragic.
http://supertradmum-etheldredasplace.blogspot.com/

For my friends in America and in France-a cruel reminder
19 Apr 2014
I think Robert Hugh Benson was influenced by their martyrdom, using some imagery of the atrocities in his book, Lord of the World. I have put a few links below to get you started. This time of history, 1793-1796 must be taught.
http://supertradmum-etheldredasplace.blogspot.com/

Umm, I thought this is what parents did, not robots

Posted by Supertradmum
Just like a good personal trainer, we want the robots to be able to guide the child toward a behavior that we desire,” said Brian Scassellati, a computer science professor at Yale and principal investigator for the study.

Are you scared yet?


Since becoming chairman, Goodman has been pushing to expand protections for all media and has noted how Democrats on the panel have been eager to nick at freedoms for conservative media while Republicans have been voting for broader protections even for liberals like Democratic financier George Soros.
He recently warned that conservative online media, like the Drudge Report, could face regulation as Democrats move to tighten the so-called “media exemption” that lets the press cover politics any way they want.
In the case of the Ryan book, publisher Grand Central Publishing sought the broad media exemption from regulation, but Democrats rejected that and pushed for a different, commercial, exemption that imposes rules over the publisher’s politics and book pricing. Republicans went along and the commission approved that 6-0.

Hello to Readers in Slovakia Posted by Supertradmum
I shall get back to Predestination, but a friend of mine just sent me Disinformation, and I am jumping into it.

Fake coupon hit Canada and the USA--disinformation on a lesser scale.

Posted by Supertradmum
A hymn from the book:


1. From starry skies descending,
Thou comest, glorious King,
A manger low Thy bed,
In winter's icy sting;
2. O my dearest Child most holy,
Shudd'ring, trembling in the cold!
Great God, Thou lovest me!
What suff'ring Thou didst bear,
That I near Thee might be!
3. Thou art the world's Creator,
God's own and true Word,
Yet here no robe, no fire
For Thee, Divine Lord.
4. Dearest, fairest, sweetest Infant,
Dire this state of poverty.
The more I care for Thee,
Since Thou, o Love Divine,
Will'st now so poor to be.

"Nothing else is worth our living for...." Obedience and The Will of God

Posted by Supertradmum
I have been looking at the actual sermons of young Cardinal Manning in his handwriting. His handwriting and mine are so similar, I was taken aback by the comparison.

I am reading "Obedience The Only Reality". It is superb, especially coming from a very young curate.

One of his points is that the great intellectual and reasoning powers we have been given by God to often become separated from the soul, the spiritual part of man. When this happens, Manning clearly states that anxiety, pain, sorrow and "the season of death" face men and women with the abolishing of these gifts they have refused to use.

The only "thing" we actually have in this world is our own spiritual life, which we take into the next world, he writes.

Everything we have done or spoken, states Manning, will either harm or help our spiritual life. He writes, "Of all the encumbrances, goings on of this busy life, of all its deeds and achievements, and possessions, how small a remainder shall be found after that fiery trial has done its work." He is referring to the final judgment, the keen accounting of God of our lives.

Manning asks how shall our works, our thoughts, our imaginations, self-persuasions and other deceits stand up to the sight of God's scrutiny.

The clergyman then goes on to say that the disobedient are condemned already. And, those who take part in the eternal obedience of Christ, the following of the will of God, use the gifts of grace given to them.

Here is another direct quotation: "Nothing else is worth our living for....Obedient or disobedient, we must be real or unreal, unperishable or perishing."

Manning states that the first step in holiness is to see what it is what God's will is for each one of us; then, to abandon everything else.

"What we are is a revelation of His will towards us. Our lot is a reality, the works of our calling are real, as long as they are done as a service to obedience. Within these bounds there is nothing which does not bear upon Eternity....Obedience to the will of God is work of direct and simple consciousness. It is to be wrought in us by its own self-confirming power. It is by doing the will of God, by recognizing it in all the changes of life; by reading it in the course of this troubled world; the Expression of the Divine Mind; by bowing ourselves down before it, it whatsoever guise it might reveal itself; by yielding ourselves in gladness of mind both to do and to suffer it, counting it a holy discipline, and a loving correction of our own willfulness, and by praying Him ever to stay His hand, till the mind of self be abolished from our regenerate being;--by this means it is that we are changed from a shadow of a fleeting life to the abiding realities of the Eternal world, being made partakers of the will of God."

Would that we heard sermons like this today! If you want to read more of this thrilling sermon, go here.
http://www.pitts.emory.edu/collections/mss002/ManningCatholicSermons/ObedienceTheOnlyReality.pdf

Manning to Gladstone on The Death of Caroline Manning

Posted by Supertradmum
"God has been graciously pleased to lead me into a way that is desert, and to bid me to serve Him with entire surrender of myself."

And a few years later he wrote to Samuel Wilberforce concerning Caroline Manning's death: "For my part, I doubt if anything else would have made me so love and yearn for the unseen world as to counterpoise the stifling hold with which the world we see and act in weighs one down."

This is an exact example of one giving one's will to God, even in grief and loss, and railing, in some pagan manner, about fate or doom. Manning saw that God's will was for him "to toil in Christ's Church in warfare here on earth."

A Cardinal of the Church Militant.....

Idiom of The Day

Tract of Newman Number One

Thoughts
On
The Ministerial Commission,
Respectfully Addressed to the Clergy