Goodbye to Ireland and the Nightingale

Posted by Supertradmum
Well, as I am not Celtic in any of my genes, I suppose I lack the necessary sentiments about leaving Ireland. I shall miss some excellent friends I met, Kathleen, Seamus, Father David Jones, Dave and others. However, I would not recommend a visit in the winter! I have lived in Alaska and in Alberta, and Ireland feels colder. Partly, the lack of central heating in many of the houses and the dampness accounts for some of the cold, but the Irish are, simply, hardier than I am. They can take it.

I wish them all well. Many years ago, I took two classes, one on Irish Drama and one on Irish Poetry. Here is a poem which sums up my overall view of the three month visit. From Seamus Heaney--

A Dog was Crying Tonight in Wicklow Also


When human beings found out about deathThey sent the dog to Chukwa with a message:They wanted to be let back to the house of life.They didn’t want to end up lost foreverLike burnt wood disappearing into smokeOr ashes that get blown away to nothing.Instead, they saw their souls in a flock at twilightCawing and headed back for the same old roostsAnd the same bright airs and wing-stretchings each morning.Death would be like a night spent in the wood:At first light they’d be back in the house of life.(The dog was meant to tell all this to Chukwu)But death and human beings took second placeWhen he trotted off the path and started barkingAt another dog in broad daylight just barkingBack at him from the far bank of a river.And that is how the toad reached Chukwu first,The toad who’d overheard in the beginningWhat the dog was meant to tell. “Human beings, ‘ he said(And here the toad was trusted absolutely),“Human beings want death to last forever.’Then Chukwu saw the people’s souls in birdsComing towards him like black spots off the sunsetTo a place where there would be neither roosts nor treesNor any way back to the house of life.And his mind reddened and darkened all at onceAnd nothing that the dog would tell him laterCould change that vision. Great chiefs and great lovesIn obliterated light, the toad in mud,The dog crying out all night behind the corpse house. 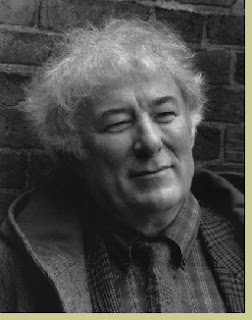 I feel that it is a country "half in love with easeful Death", as Keats wrote in his great Ode to a Nightingale. In fact, a Nightingale was singing on a line at dusk only a few feet away from me. It came out of the hedge by the walk, by the field of sheep and one rabbit, and sang its amazing song. If you have never heard a Nightingale, the song is like a series of trills and whistles and is quite loud. I have heard these in England as well, years ago. Goodbye for now, Nightingale.