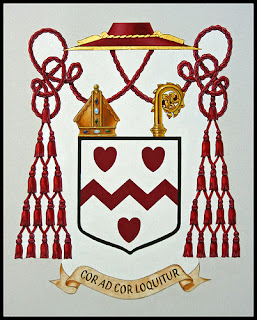 As it is the Month of the Sacred Heart, I thought I would highlight several churches which include chapels to that devotion. I have been to all of these churches in my lifetime, most more than once.

The first is, of course, the Gesu in Rome, where the famous Batoni painting, on the right of this blog, holds the honor of being the first depiction of the Sacred Heart. I attended a Mass there said by Blessed John Paul II.

The second is the Church of the Circumcision of the Lord in Valletta, Malta, which has a chapel with an exact copy of the painting. The chapel also holds a letter from St Ignatius of Loyola. The Batoni painting is small, but dynamic. I went there almost daily when I lived in Valletta.

The third is the famous Chapel of the Sacred Heart at the Maryvale Institute in Birmingham, which has yet another depiction of the Batoni painting, but in glass. This has been in England for over 150 years and the chapel is the first ever dedication to the Sacred Heart in England. I was there last week.

The fourth is the Cathedral of the Sacred Heart in Davenport, Iowa, my hometown, the first Cathedral ever dedicated to that devotion in America. I grew up going there for special feasts and it was my place for daily Mass when I was working.

The fifth is the Brompton Oratory, dedicated to the Immaculate Heart of Mary but containing a chapel of the Sacred Heart. I was married at the Oratory, as it was my parish and I went to daily Mass there..

The sixth is the Basilica of the Sacred Heart at Notre Dame, my alma mater. I was there almost daily.

The seventh is the Ordinariate, which although dedicated to Our Lady of Walsingham, also honors Newman as a patron, and his hearts from his crest are on their pin. I have many friends in the Ordinariate.

The last connection to the Sacred Heart is not a church, but a person, Blessed John Henry Cardinal Newman, not only one of my personal patrons, but the subject of my current study, and in the past, as well.

I wonder if I shall think of some other Sacred Heart threads in my life?