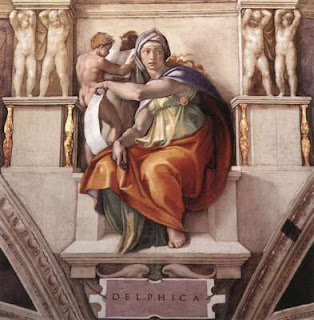 The Delphic Oracle and St. Catherine of Siena have something in common, which is not unusual, being that God works through many means to bring us all to perfection. Garrigou-Lagrange in the post yesterday, was examined as to the virtue of prudence. Leading from that infused virtue, the great author notes that St. Catherine of Siena, in The Dialogue, which I have not read in its entirety since 2009, relates what Christ says to all through her: 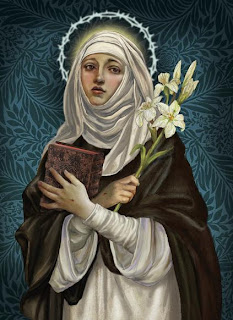 "Discretion...render to each one his due. Chiefly to Me in rendering praise and glory to My name, and in referring to Me the grace and the gifts which she sees and knows she has received from Me; and rendering to herself that which she sees herself to have merited, knowing that she does not even exist of herself....this founds the virtue of discretion on knowledge of self, that is, on true humility, for , were this humility not in the soul, the soul would be indiscreet; indiscretion being founded on pride, as discretion is on humility."


When the Greeks and others in the ancient world approached the Oracle and saw the words imprinted on the forecourt of the Temple of Apollo, they would have stopped and pondered how wisdom, prudence, even sophia would lead them to self-knowledge. To the Greeks, humility, a particularly Christian virtue, may or may not have been part of the path to self-knowledge, except for the philosophers. But, wisdom, like prudence, lies in humility.

Humilitas is the motto of the Borromeo family, and therefore, of St. Charles Borromeo, whose chapel here in England in the Church next door to where I am today, stands as a witness to real humility. Here is a great saint, one of the greatest of the Counter-Reformation, who died at such an early age, 47, and gave up rank and status for the Kingdom of God. His humility lay in the fact of his personal holiness and his dedication to the Church he loved so much.

St. Catherine of Siena, although not of such a great house, did the same, that is, followed the way of obedience to the Church and to Christ. The humility of these two saints reminds us that prayer, fasting, self-denial, and truth guide one to Eternal Life, through self-knowledge.

Discretion, from humility, leads to mercy, kindness, forgiveness and charity. Without discretion, prudence would devolve into a self-seeking cleverness, a selfishness based on worldly concerns. Discretion allows us to relate to others with the Mind of Christ. 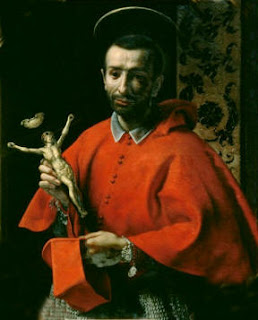 That the Oracle would give knowledge, either from a trance induced by vapors, or from a source less than godly, may be questioned. That God, through the infused virtues gives self-knowledge, to those who cooperate with grace, is the path of real wisdom and a such self-knowledge is a gift to those who want it. To be continued...