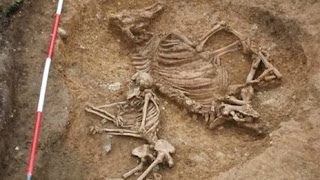 Now, do I want to be buried with a cow? This is an extraordinary story of a grave found in Cambridgeshire. An Anglo-Saxon grave of a woman of considerable standing, with broaches and a set of keys, was buried in the Fifth Century, with a cow.

Now, if the cow was sacrificed to be in the grave with the woman, that is a sign of ostentatious wealth, and the PETA people would not approve. Maybe the cow fell on her and that is how she died. But, buried with her cow she was.

I find the presence of the cow rather comforting. The archaeologists are over the moon, as previous animal burials in England have been men with horses, which makes some sense. The man and horse burials indicate a military or ruler connection, whereas the cow show us a domestic connection.

Now, a Black Angus-Limousin Bull costs about $2100 right now. So, I guess that would show I had at least that much money, plus the money for feed and barn. A pair of bred cow costs $1700 in Kirksville, Missouri, not too far from home. One Angus bull and 25 cows costs about $35,000 in Iowa.

Well, money on the hoof, as we say, is a mixed blessing. But, this Anglo-Saxon matron must have loved her cow to have it buried with her. She did not leave her money to the cow, as some wealthy matrons in the States leave their money to their dogs or cats. 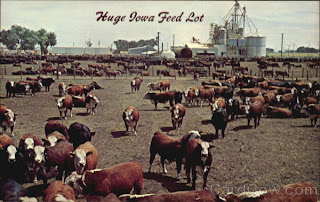 Still, it would have been better in a BBQ, don't you think? The archaeologists would not have such a good time, now, however. I would have let my cow live for another day.