Rectitude of the Will in Thomas Aquinas-One

Posted by Supertradmum
The entire reason why we are here is to come to know, love and serve God in this world and to praise Him in the next.

That is right out of my childhood catechism.

We need to seek God. If our will is fixed on knowing, loving and serving God, then we are approaching Rectitude of the Will. 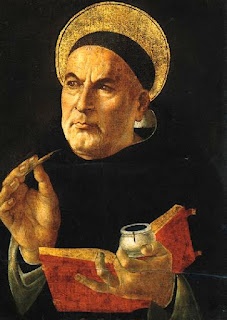 Part II.1, Question 3, Article 8: Whether man's happiness consists in the vision of the divine essence?
Objection 1: It would seem that man's happiness does not consist in the vision of the Divine Essence. For Dionysius says (Myst. Theol. i) that by that which is highest in his intellect, man is united to God as to something altogether unknown. But that which is seen in its essence is not altogether unknown. Therefore the final perfection of the intellect, namely, happiness, does not consist in God being seen in His Essence.
Objection 2: Further, the higher the perfection belongs to the higher nature. But to see His own Essence is the perfection proper to the Divine intellect. Therefore the final perfection of the human intellect does not reach to this, but consists in something less.
On the contrary: It is written (1 Jn. 3:2): "When He shall appear, we shall be like to Him; and we shall see Him as He is."
I answer that: Final and perfect happiness can consist in nothing else than the vision of the Divine Essence. To make this clear, two points must be observed. First, that man is not perfectly happy, so long as something remains for him to desire and seek: secondly, that the perfection of any power is determined by the nature of its object. Now the object of the intellect is "what a thing is," i.e. the essence of a thing, according to De Anima iii, 6. Wherefore the intellect attains perfection, in so far as it knows the essence of a thing. If therefore an intellect knows the essence of some effect, whereby it is not possible to know the essence of the cause, i.e. to know of the cause "what it is"; that intellect cannot be said to reach that cause simply, although it may be able to gather from the effect the knowledge of that the cause is. Consequently, when man knows an effect, and knows that it has a cause, there naturally remains in the man the desire to know about the cause, "what it is." And this desire is one of wonder, and causes inquiry, as is stated in the beginning of the Metaphysics (i, 2). For instance, if a man, knowing the eclipse of the sun, consider that it must be due to some cause, and know not what that cause is, he wonders about it, and from wondering proceeds to inquire. Nor does this inquiry cease until he arrive at a knowledge of the essence of the cause.
If therefore the human intellect, knowing the essence of some created effect, knows no more of God than "that He is"; the perfection of that intellect does not yet reach simply the First Cause, but there remains in it the natural desire to seek the cause. Wherefore it is not yet perfectly happy. Consequently, for perfect happiness the intellect needs to reach the very Essence of the First Cause. And thus it will have its perfection through union with God as with that object, in which alone man's happiness consists, as stated above (Articles [1],7; Question [2], Article [8]).
Reply to Objection 1: Dionysius speaks of the knowledge of wayfarers journeying towards happiness.
Reply to Objection 2: As stated above (Question [1], Article [8]), the end has a twofold acceptation. First, as to the thing itself which is desired: and in this way, the same thing is the end of the higher and of the lower nature, and indeed of all things, as stated above (Question [1], Article [8]). Secondly, as to the attainment of this thing; and thus the end of the higher nature is different from that of the lower, according to their respective habitudes to that thing. So then in the happiness of God, Who, in understanding his Essence, comprehends It, is higher than that of a man or angel who sees It indeed, but comprehends It no