Part Nine Doctors of the Church: Hildegard of Bingen 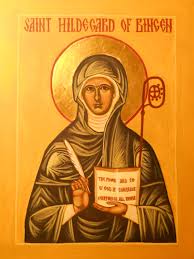 The lofty words of Catherine introduce us to the more mysterious, yet colorful words of Hildegard. Here we have her describing the Illuminative and Unitive States. Her books are Scivias ."Know the Way" 1151. Liber vitae meritorum "Book of Life's Merits" or "Book of the Rewards of Life", and Liber divinorum operum ,"Book of Divine Works", also known as De operatione Dei, "On God's Activity" both composed around 1173 according to some historians.

I like it that she lived to write at the age of 75 or so. This is encouraging. She lived to be 81.

Here she describes the Illuminative State and specifically, infused knowledge:

And it came to pass ... when I was 42 years and 7 months old, that the heavens were opened and a blinding light of exceptional brilliance flowed through my entire brain. And so it kindled my whole heart and breast like a flame, not burning but warming... and suddenly I understood of the meaning of expositions of the books... 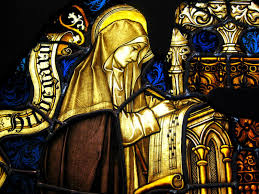 Her infused knowledge included a vision of Wisdom and Love similar to those of the Old Testament. Boethius as well wrote of Lady Philosophy which some see as Wisdom. Wisdom has been called Sophia in the Greek and has the attributes of a woman. However, we are not to be confused about the "gender" of the Holy Spirit as male or female. The vision given to Hildegard stresses the female aspect of Wisdom.

The aspect of Love here is touching and poetic, but based on a unity with God.


I heard a voice saying to me, "This Lady whom you see is Love, who has Her dwelling place in eternity. When God wished to create the world, He leaned down, and with tender Love, provided all that was needed, as a parent prepares an inheritance for a child. And thus, in a mighty blaze the Lord ordained all His works.
Then creation recognized its Creator in its own forms and appearances. For in the beginning, when God said, "Let it be!" and it came to pass, the means and the Matrix of creation was Love, because all creation was formed through Her as in the twinkling of an eye.


And, on the unity of Love, she wrote from the vision of the Holy Spirit:

May the Holy Spirit cleanse you from all faults of malice, and win you the friendship of Love, most sweet, most tender; who captured the mighty Stag and poured forth song above all heavens; who entered the bridal chamber of all the King's mysteries; and who revealed Herself in all Her beauty in the mirror of the Cherubim. 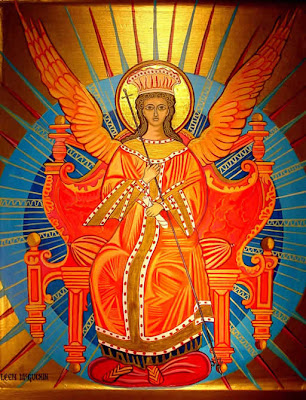 She is Divine Wisdom. She watches over all people and all things in heaven and on earth, being of such radiance and brightness that, for the measureless splendor that shines in Her, you cannot gaze on Her face or on the garments She wears. For She is awesome in terror as the Thunderer's lightening, and gentle in goodness as the sunshine. Hence, in Her terror and Her gentleness, She is incomprehensible to mortals, because of the dread radiance of divinity in Her face and the brightness that dwells in Her as the robe of Her beauty. She is like the Sun, which none can contemplate in its blazing face or in the glorious garment of its rays. For She is with all and in all, and of beauty so great in Her mystery that no one could know how sweetly She bears with people, and with what unfathomable mercy She spares them.


Pope Benedict XVI wrote this of her:

During the years when she was superior of the Monastery of St Disibodenberg, Hildegard began to dictate the mystical visions that she had been receiving for some time to the monk Volmar, her spiritual director, and to Richardis di Strade, her secretary, a sister of whom she was very fond. As always happens in the life of true mystics, Hildegard too wanted to put herself under the authority of wise people to discern the origin of her visions, fearing that they were the product of illusions and did not come from God. She thus turned to a person who was most highly esteemed in the Church in those times: St Bernard of Clairvaux, of whom I have already spoken in several Catecheses. He calmed and encouraged Hildegard. However, in 1147 she received a further, very important approval. Pope Eugene III, who was presiding at a Synod in Trier, read a text dictated by Hildegard presented to him by Archbishop Henry of Mainz. The Pope authorized the mystic to write down her visions and to speak in public. From that moment Hildegard's spiritual prestige continued to grow so that her contemporaries called her the "Teutonic prophetess". This, dear friends, is the seal of an authentic experience of the Holy Spirit, the source of every charism: the person endowed with supernatural gifts never boasts of them, never flaunts them and, above all, shows complete obedience to the ecclesial authority. Every gift bestowed by the Holy Spirit, is in fact intended for the edification of the Church and the Church, through her Pastors, recognizes its authenticity.