The Pope is an example for all of us, speaking of prayer and contemplation today as part of this "going up the hill". The road of suffering for him will not be seen by us. His going into silence and prayer should be example to all of us as to our priorities at this time. We must prioritize and see our limitations.

I think he is telling us that the new evangelization must start in silence, with our own purification  In fact, today with the reading of the covenant of Abram and God, it struck me that my two posts on the stars were timely today. He was promised descendants as many or more than the stars in the sky.

We are his people, we are his descendants in Faith. He is our father, and shows us the way of trust. I do not think that people realize how much Faith Abram had in his horribly pagan land, surrounded by people of nasty man-made religions. His example is one we should keep before us in the days to come. 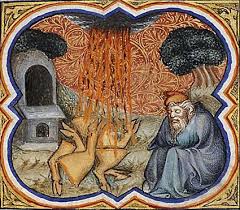 Abram was asked to enter into a intimate relationship with God and he had to completely trust in God, who told him how to take the animals of sacrifice and place these on the ground.  The walking of Abram and God as the Pillar of Fire and Smoke, is the making of a love relationship. When I was a child, my children's Bible had a magnificent picture of Abram in the dark, walking behind the Pillar of Fire through the path of the dead animals. Now, more than 50 years later, I remember that painting. I wish I had a copy, as Abram has always captured my imagination. I have written more than one poem on him and his life.

The way of perfection starts with purification and the first dark night of the soul, which is foreshadowed by Abram being in darkness in today's reading.

His being in a great darkness and chasing away the vultures, is like the later saints we know talking about getting rid of sin and interior desires while in the dark night.

The reward for his perseverance is Abram's covenant with God, and the vow is that the person who does not keep the covenant is stating that he would be split like the animals if he would break the covenant.

God is making Himself vulnerable and takes the Death of the breaking of the covenant on Himself, through His Son.

This is the first hint to Abram that God loves him so much that He would suffer for him AND his descendants.

This covenant of Abram is the Old Testament and the new covenant is the New Testament. 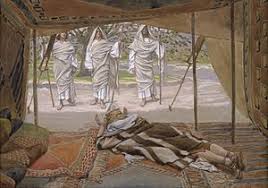 Christ was Present in the Trinity, in that covenant with Abram. Just as the Trinity came and visited Abram later, so too, is God the Father, God the Son, and God the Holy Spirit making a covenant with our Father in Faith. 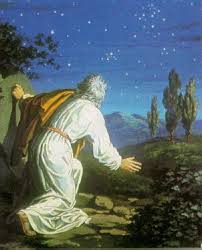 We are the stars.....made bright through the Passion of Christ.

Later on,  Abram would be asked to sacrifice his only son, only to prove his faith. God gave us His Son as a Sacrifice to prove His Faith in us, through the Covenant.