..CAST YOUR BREAD UPON THE WATERS, FOR AFTER MANY DAYS YOU WILL FIND IT AGAIN.

Posted by Supertradmum
And, this Bread is the Bread of Life...

“There are those who are well mannered, who do everything well, but are unable to bring people to the Church through proclamation and apostolic zeal,” Pope Francis

I am giving more details on the proposed community in Walsingham and asking for prayers and at least three members.

It is to be a lay community, such as a lay association of the faithful.

Group prayer is to be the Gregorian Chant in Latin and from the Monastic Diurnal.

Prayer will be at least three times a day, and eventually, with permission, all day Adoration of the Eucharist. No television, no chasing after the trivia of the world, but a place of serenity and suffering forms part of the tapestry of this community.

The Eucharistic Heart of Jesus is the center of this community, which will live simply and serve several types of people. 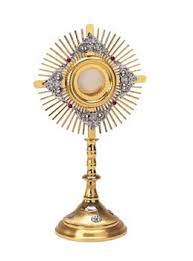 Pope Benedict XV instituted the Feast of the Eucharistic Heart of Jesus and here is a section from his letter on this.

The chief reason of this feast is to commemorate the love of Our Lord Jesus Christ in the mystery of the Eucharist. By this means the Church wishes more and more to excite the faithful to approach this sacred mystery with confidence, and to inflame their hearts with that divine charity which consumed the Sacred Heart of Jesus when in His infinite love He instituted the Most Holy Eucharist, wherein the Divine Heart guards and loves them by living with them, as they live and abide in Him. For in the sacrament of the Holy Eucharist He offers and gives Himself to us as victim, companion, nourishment, viaticum, and pledge of our future glory.

Here is a translation of the propers of that feast, which is on the Thursday in the Octave of the Feast of the Sacred Heart from http://vultus.stblogs.org/2010/06/feast-of-the-eucharistic-heart.html from Father Mark.

Introit
SCIENS Jesus quia venit hora ejus ut
transeat ex hoc mundo ad Patrem:
cum dilexisset suos, qui erant in
mundo, in finem dilexit eos. Alleluia,
alleluia. Ps. 97. 1. Cantate Domino
canticum novum: quia mirabilia
fecit. Gloria Patri.
Jesus, knowing that His hour had come
to pass out of this world to the Father,
having loved His own who were in the world,
loved them to the end (Jn 13:1).
Collect
DOMINE Jesu Christe, qui divitias
amoris tui erga homines effundens
Eucharistiæ Sacramentum condidisti:
da nobis, quæsumus; ut amantissimum
Cor tuum diligere, et tanto
Sacramento digne semper uti valeamus:
Qui vivis.
Lord Jesus Christ,
Who in pouring out the treasures of Your love for mankind,
instituted the sacrament of the Eucharist,
grant us, we beseech You,
always to cherish Your most loving Heart,
and worthily to avail ourselves of so great a Sacrament.
Who live and reign with God the Father,
in the unity of the Holy Spirit,
God, forever and ever.

Brethren: To me, the least of all the Saints, is given the grace, to preach among the Gentiles the unsearchable riches of Christ: and to enlighten all men, that they may see what is the dispensation of the mystery which hath been hidden from eternity in God, Who created all things: that the manifold wisdom of God may be made known to the principalities and powers in heavenly places through the Church, according to the eternal purpose which He made in Christ Jesus our Lord: in Whom we have boldness and access with confidence by the faith of Him. For this cause I bow my knees to the Father of our Lord Jesus Christ, of Whom all paternity in Heaven and earth is named, that He would grant you according to the riches of His glory, to be strengthened by His Spirit with might unto the inward man, that Christ may dwell by faith in your hearts: that being rooted and grounded in charity, you may be able to comprehend with all the Saints, what is the breadth and length, and height and depth: to know also the charity of Christ which surpasseth all knowledge. That you may be filled unto all the fullness of God.

Gradual
EXSULTA et lauda, habitatio Sion,
quia magnus in medio tui Sanctus
Israel. Notas facite in populis adinventiones
ejus.
Exult and praise, O abode of Sion, for
great is the Holy One of Israel in the midst
of thee. Among the people make known His
works.
Alleluia
ALLELUIA, alleluia. V. Quid bonum
ejus est, et quid pulchrum ejus, nisi
frumentum electorum, et vinum
germinans virgines. Alleluia.
Alleluia, alleluia. V. What is His good and
what is His beauteous thing, but the wheat of
the elect, and wine bringing forth virgins?
Alleluia.

At that time Jesus said to His disciples: With desire I have desired to eat this pasch with you, before I suffer. For I say to you that from this time I will not eat it, till it be fulfilled in the kingdom of God. And having taken the chalice, He gave thanks and said: Take and divide among you. For I say to you that I will not drink of the fruit of the vine, till the kingdom of God come. And taking bread, He gave thanks and brake and gave to them, saying: This is My Body, which is given for you. Do this for a commemoration of Me. In like manner, the chalice also, after He had supped, saying: this is the chalice, the new testament in My Blood, which shall be shed for you.

The house has room for three core people or four and one or two "guests" who want to make a silent retreat. Also, I would hope it would become a centre for the Latin Mass in Walsingham, which only has a Latin Mass once or twice a year.

The entire project is a vision given to me in the convent and discussed with Mother General, who said to proceed with God leading me slowly but surely.

One begins small, very small. The reason why Walsingham is important is that this is the National Shrine of Mary in England.

Pope Leo XIII said that "When England returns to Walsingham, Our Lady will return to England."