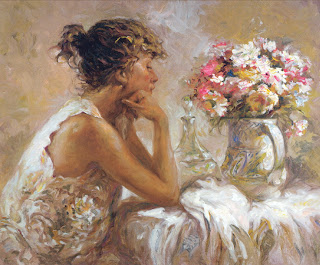 As the prince entered the forest, he looked back at the old woman standing in her garden. For a moment, he was confused, as she looked forty years younger, as if he could see her as her father did. But, the clouds covered the sun, and rain pushed him in to the trees. Now, this forest was made of pine and fir, as the woman's cottage was high in the foothills, across a plain which the river in older days had flattened with flooding. The prince lifted his satchel and began to climb up the hills of fir, then pine, then light birch, until, finally, he was on rocky ground, beyond the tree line. For a moment, he looked back and could see nothing but the green darkness of the trees. He realized the rain has stopped and that he was hungry.

Sitting on a rock, the young prince, open his satchel to find a complete dinner, including wine, bread, cheese and eggs. He marvelled at the luncheon and ate at once. As he was finishing, the prince heard a scratching noise to his left, just at the edge of the line of trees. He stood up, a bit afraid, as he had no sword or armour.

In a high branch of a yellowing birch, the prince could see an large, bright bird. This bird was one he did not recognize. The plumage of the bird was of rainbow colours, and its tail was as long as the prince's arm. But, most amazing, is that it spoke.

"Prince, do not be deceived by this old woman. She is really a witch and I am a young man she put under a spell years ago. I, too, am a prince, but I only need the golden rose from the cleft in the rock to be free from my spell. Will you help me?" The bird's voice was like velvet, and for a moment, the prince thought of bringing the rose to the bird-man. But, the prince remembered the woman's words, and that she had saved him from death. He decided not to answer the rainbow bird, but move up higher into the rocky cliffs ahead.

"You will regret not helping me," said the bird, but the prince carried on. He stopped for a moment on a stone ledge and looked back towards the bird, but it had changed shape and seemed like a dragon to him. The young prince was frightened, but continued his quest. After walking most of the day, and it was a hot day, the prince sat down by a small stream to drink some of the cool mountain water. When he bent over to reach the water, he saw the golden rose. The flower was the most beautiful rose he had ever seen. As he bent over to pick it, he caught some movement from the corner of his eye. The prince snatched the flower and put it in the satchel. But, as he stood up, he saw a puma sitting on its haunches and staring at him.

The prince now was definitely afraid. His hands shook, but he stared back at the puma, whose coat shimmered in the setting sun. The puma spoke and its voice was like the sound of water, cool and comforting.

"I smell your fear, Prince, but I want something of you. I want the purple stone which lies in the stream above us. I cannot get it myself, but if you give it to me, I have the power to make your enemies fear you for the rest of your life. I shall give you power."

The prince did not answer the puma but he did something very brave. He turned away from the large cat and resumed his climb up the mountain. He decided to trust the old woman. When he had climbed about twenty feet, the prince looked back at the sunlit puma, but the animal had changed into a large serpent, coiled and red. The prince continued his climb, and as he put his had on top of the next rock jutting out, his hand felt cold, cold water. The prince threw himself up on the large, flat rock above and saw a tiny stream coming out of the ground. Where the stream came out of the small hole in the ground lay an oval amethyst as beautiful as the dawn. The prince picked it out of the mud and put it in his satchel.  As he stood up, he saw the most incredible sight of all. A beautiful woman in silver sat on a throne with animals surrounding her. She was as white in skin as the silver in her dress, and her shoes were made of silver. She spoke, and her words were like the tinkling of bells in a valley. Her hair was as bright as the sun. And her eyes were as sparkling as dew on the grass in summer.

"Why do you believe a hag, a wretched woman when I can tell you the real tale. I can give you devotion and love if you would only bring me the scroll which is on top of the mountain which I cannot climb. I can make you happier than you can imagine, for happiness is in my gift."

The young prince was almost, for a second or two, taken in by the beauty of this woman. But, his heart trusted the old woman, and as he passed her and her retinue of animals, one a large bear which growled at him when he passed, he began to climb the steepest cliff of all. He struggled hand by hand to the top and when he reached the small ledge, he turned and looked back to see the bright queen, as he thought she was, but instead, he only saw a horrid monster with black tentacles and large empty eyes.

The prince turned and saw a withered tree the size of a shrub and in the branches was the white scroll with odd black characters. He took the scroll, and put it in his satchel. Then, he sat down and wondered how he would get past the monsters left behind, down the path.