Some of us just can't

Because of some interesting arguments in the blogosphere of late, I have been thinking, and did a bit of commenting, on what I call "institution think".  Now institution think becomes a mode of approaching problems, techniques, strategies and even socializing in established institutions.

Anything which is an institution breeds mostly people who think in terms of institutional thinking.

The main reason that institution think exists is for one reason alone: for the continuation of the institution.

I repeat that: The main reason that institution think exists is for one reason alone: for the continuation of the institution.

I lasted 18 months and it was a seminary where homosexuals were still being accepted. It was an institution which hated and still hates the TLM. It is not in Europe.

I have been cautioned as well as been encouraged to think in terms of institution think, but have never been able to do it.

A person with a fierce sense of what it is to be an individual, to have a core of being which is independent of manipulation, that person cannot and does not fall into institution think.

Some huge families adopt institution think-the only important thing is the continuation of the line and property. 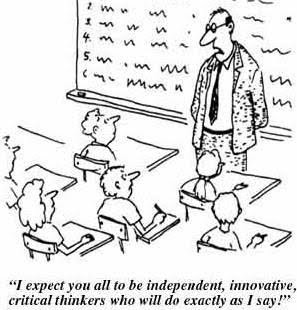 Unless one can find a place in these institutions where one is either protected, or where one can avoid evil, a person who cannot think in institution think is better off being self-employed, or, and this is a blessing, finding an institution where the mode of being is agreeable and livable, where one finds like-minded people.

Good luck. This thinking is not the same as loyalty based on mutual respect and honesty.