More on St. Thomas Aquinas, Suffering And Us 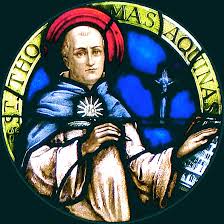 Fourth Article: Whether Christ Ought To Have Suffered On The Cross
Reply. The answer is that it was the most fitting for Christ to have suffered on the cross; (1) because Christ gave us an example of virtue, so that no kind of death ought to be feared by an upright man; (2) "so that whence death came [from the tree], thence life might arise, and that He who overcame by the tree, might also by the tree be overcome";[1773] (3) and (4) that dying on a high rood, He might purify the air and prepare our ascent into heaven; (5) the fact that Christ died with outstretched hands signifies the universality of redemption; (6) because, as St. Augustine says, "The tree on which were fixed the members of Him dying was even the chair of the Master teaching";[1774] (7) because there were very many figures in the Old Testament of this death on the cross.
First objection. In this kind of death the fire pertaining to holocausts is wanting. St. Thomas replies by saying that, "instead of material fire, there was the spiritual fire of charity in Christ's holocaust."[1775]
Second objection. Death on the cross is most ignominious. St. Thomas replies to this by quoting St. Paul: "He endured the cross, despising the shame,"[1776] so that by His humility, He made reparation for our sins of pride.
Third objection. Death on the cross is a death of malediction. St. Thomas again quotes the following text from St. Paul: "Christ hath redeemed us from the curse of the law, being made a curse for us,"[1777] that is, He took upon Himself the penalty of sin.
All these remarks clearly manifest the fittingness of the Passion, and they better illustrate both God the Father's love and Christ's love for us. As the Evangelist says: "For God so loved the world, as to give His only-begotten Son."[1778] As St. Paul says: "He that spared not even His own Son but delivered Him up for us all."[1779] Therefore our redemption is predominantly a mystery of love.

Again, to clarify the purpose of this mini-series of posts, I can point out that what Christ experienced in the Passion is what we are all called to do under times of severe trial.

Look at these points from Garrigou-Lagrange and recall that in the long perfection series, which was based on one of his books, the need for perfection dictates that we cannot truly suffer as we ought to do without undergoing purification first.

The type of extreme suffering endure by Christ demanded an Innocence, a Purity unknown to men before His Coming.

The curses of death and the law were lifted from all the souls of all men who follow His way.

The mystery of love for us is this-that if we love Christ and His Church, we shall be willing to undergo purification and severe suffering.

To be continued....and more here.