On lying to self on repost day

Posted by Supertradmum
I want to go back to Garrigou-Lagrange in this study of perfection for a few posts and then move on to Cyril of Jerusalem. I want to stress the necessity, as I have before, of objectivity in the spiritual life, The only way one can be objective is to face reality honestly with integrity.

In this meantime, chew on this meaty statement from Garrigou-Lagrange on the use of our intellect, from his study on reality. I am very concerned  by the fact that so many people can only argue from feelings and perception and not from logic. We have been given the capacity, the ability to use our intellect in matters of faith and morals. To do less is not to be an adult in the Faith.

A few days ago, I said I would write something on integrity, the connection to love and honesty.

Here is a beginning of this discussion.


CH 4. INTELLIGBLE BEING AND FIRST PRINCIPLES

St. Thomas, following Aristotle, teaches that the intelligible being, the intelligible reality, existing in sense objects is the first object of the first act of our intellect, i. e.: that apprehension which precedes the act of judging. Listen to his words: "The intellect's first act is to know being, reality, because an object is knowable only in the degree in which it is actual. Hence being, entity, reality, is the first and proper object of understanding, just as sound is the first object of hearing." [123] Now being, reality, is that which either exists (actual being) or can exist (possible being): "being is that whose act is to be." [124] Further, the being, the reality, which our intellect first understands, is not the being of God, nor the being of the understanding subject, but the being, the reality, which exists in the sense world, "that which is grasped immediately by the intellect in the presence of a sense object." [125] Our intellect, indeed, is the lowest of all intelligences, to which corresponds, as proper and proportioned object, that intelligible reality existing in the world of sense. [126] Thus the child, knowing by sense, for example, the whiteness and the sweetness of milk, comes to know by intellect the intelligible reality of this same sense object. "By intellect he apprehends as reality that which by taste he apprehends as sweet." [127]. 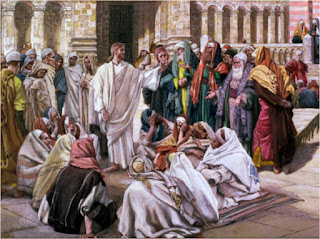 In the intelligible reality thus known, our intellect seizes at once its opposition to non-being, an opposition expressed by the principle of contradiction: Being is not non-being."By nature our intellect knows being and the immediate characteristics of being as being, out of which knowledge arises the understanding of first principles, of the principle, say, that affirmation and denial cannot coexist (opposition between being and non-being): and other similar principles." [128] Here lies the point of departure in Thomistic realism.

Thus our intellect knows intelligible reality and its opposition to nothing, before it knows explicitly the distinction between me and non-me. By reflection on its own act of knowledge the intellect comes to know the existence of that knowing act and its thinking subject. Next it comes to know the existence of this and that individual object, seized by the senses. [129] In intellective knowledge, the universal comes first; sense is restricted to the individual and particular.

If we do not  use universals to apply to particulars, we may not be using the gift of Prudence.

A bit later, the writer notes this.

This limited moderate realism of Aristotle and Aquinas is in harmony with that natural, spontaneous knowledge which we call common sense. This harmony appears most clearly in the doctrine's insistence on the objective validity and scope of first principles, the object of our first intellectual apprehension. These principles are laws, not of the spirit only, not mere logical laws, not laws merely experimental, restricted to phenomena, but necessary and unlimited laws of being, objective laws of all reality, of all that is or can be.

There may be two generations of people who have no common sense, who cannot objectify. This is dangerous. Very.

Without the realization of the real world as separate from one's perceptions, a person cannot grow in perfection...this is the sin of the Pharisees-to persist in one's own reality after being faced with the Truth.

Why do people lie to themselves? For comfort? Out of fear?

So then, if you are bringing your offering to the altar and there remember that your brother has something against you, leave your offering there before the altar, go and be reconciled with your brother first, and then come back and present your offering.
Come to terms with your opponent in good time while you are still on the way to the court with him, or he may hand you over to the judge and the judge to the officer, and you will be thrown into prison. I tell you solemnly, you will not get out till you have paid the last p