The Snakes Have Returned

Posted by Supertradmum
The story of Patrick is not about real snakes, but about the Pythonic demons, in my opinion. He exorcised this pagan isle. 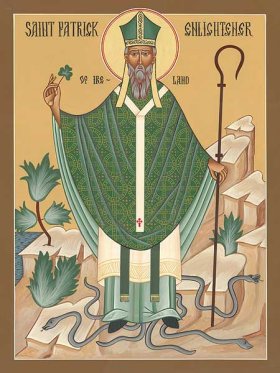 Long ago, this powerful, holy man conquered the pagan religion of the Druids.A man of extraordinary gifts, Patrick must have overcome the demons of false seers, pagan rituals which may have included killing people, and secret worship of nature. Natural religion also claims that a person can save themselves. There is a secret society here which believes that and which has much influence.

I cannot help but believe that the snakes have returned to Ireland. Abortion is now legal, and the island abounds with witches, false visionaries and members of a certain secret society.

That ssm will be passed soon is another indication that evil has climbed back into the Holy Isle.

The rise of the occult here is staggering. November 18th was official "Occult Day" here, as it was in America.

I found Ireland under a black cloud in 2011, and the darkness has thickened. If Ireland ever needed St. Patrick, it is now.

I would be so happy if all those Michaels would sincerely pray to their patron for this beautiful place.

In one Medieval book, St. Patrick is standing on a snake supposedly in Purgatory, the door of which is supposed to be on Station Island in Lough Derg. Too bad the belief in Purgatory has passed out of Ireland.

The most pious people I have met here, who are under the age of 45 are not Irish, but Polish, Scottish, and other-ish.

If ever this Island of Saints needed saints, it is today.


While I am writing this, I can hear the strong wind blowing over Dublin. My heart aches for this city.

The snakes have returned.