After Katrina, I went down and helped for several months. Two years after the hurricane, my son and I returned to visit friends in both New Orleans and Bay St. Louis. Lovely people we had met the first time.

One couple had received a Katrina Cottage and we looked at it, spending some time with them. Thankfully, they had there own land and Bay St. Louis was such a mess, the cottages were absolutely needed. These friends have now built a new house further inland, as the bayou on which they lived was completely ruined by the storm.

But, I was intrigued by the cottage and the space which it allowed for two people. I am still thinking of such a cottage for the house of prayer. Size does not matter, as long as two can pray, and even the Lord can dwell in the Host, with possibilities for one retreatant, who just wants to get away.

So keep praying...I am moving in two weeks, renting temporarily, and looking at some of the small cottages actually built in the area which are about the size of a Katrina Cottage.

God makes new doughnuts every day....open to His Will. 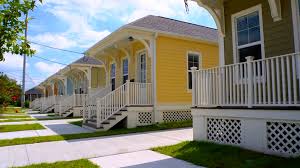