Eros to Agape and Caritas continued--Catholicism vs. Socialism, Part 4 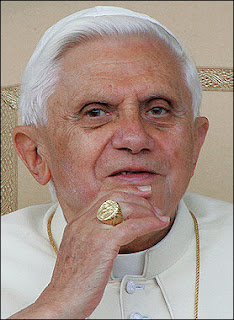 I am going to skip some of this excellent encyclical and move to more modern considerations, as this is a mini-series on the answer to socialism. Many commentators would agree with the Pope that the influence of Marxism in the world has changed the argument and made it more difficult for the Church to deal with criticisms. However, the Holy Spirit is in the Church and the call to a just social order must be based on what is here and elsewhere called subsidiarity.

Here is the Pope on this:

Since the nineteenth century, an objection has been raised to the Church's charitable activity, subsequently developed with particular insistence by Marxism: the poor, it is claimed, do not need charity but justice. Works of charity—almsgiving—are in effect a way for the rich to shirk their obligation to work for justice and a means of soothing their consciences, while preserving their own status and robbing the poor of their rights. Instead of contributing through individual works of charity to maintaining the status quo, we need to build a just social order in which all receive their share of the world's goods and no longer have to depend on charity. There is admittedly some truth to this argument, but also much that is mistaken. It is true that the pursuit of justice must be a fundamental norm of the State and that the aim of a just social order is to guarantee to each person, according to the principle of subsidiarity, his share of the community's goods. This has always been emphasized by Christian teaching on the State and by the Church's social doctrine. Historically, the issue of the just ordering of the collectivity had taken a new dimension with the industrialization of society in the nineteenth century. The rise of modern industry caused the old social structures to collapse, while the growth of a class of salaried workers provoked radical changes in the fabric of society. The relationship between capital and labour now became the decisive issue—an issue which in that form was previously unknown. Capital and the means of production were now the new source of power which, concentrated in the hands of a few, led to the suppression of the rights of the working classes, against which they had to rebel

With the background, the Church responded quickly to the challenge of Marx, with encyclicals coming out only one year after the publication of Das Capital in English. The Popes wasted no time, as the threat of atheism in was growing with the rise of communism. The Pope thinks the overall view was late in coming, but the documents against Modernist heresies set the stage for the later encyclicals. Here is his comment:

It must be admitted that the Church's leadership was slow to realize that the issue of the just structuring of society needed to be approached in a new way. There were some pioneers, such as Bishop Ketteler of Mainz († 1877), and concrete needs were met by a growing number of groups, associations, leagues, federations and, in particular, by the new religious orders founded in the nineteenth century to combat poverty, disease and the need for better education. In 1891, the papal magisterium intervened with the Encyclical Rerum Novarum of Leo XIII. This was followed in 1931 by Pius XI's Encyclical Quadragesimo Anno. In 1961 Blessed John XXIII published the Encyclical Mater et Magistra, while Paul VI, in the Encyclical Populorum Progressio (1967) and in the Apostolic Letter Octogesima Adveniens (1971), insistently addressed the social problem, which had meanwhile become especially acute in Latin America. My great predecessor John Paul II left us a trilogy of social Encyclicals: Laborem Exercens (1981), Sollicitudo Rei Socialis (1987) and finally Centesimus Annus (1991). Faced with new situations and issues, Catholic social teaching thus gradually developed, and has now found a comprehensive presentation in the Compendium of the Social Doctrine of the Church published in 2004 by the Pontifical Council Iustitia et Pax. Marxism had seen world revolution and its preliminaries as the panacea for the social problem: revolution and the subsequent collectivization of the means of production, so it was claimed, would immediately change things for the better. This illusion has vanished. In today's complex situation, not least because of the growth of a globalized economy, the Church's social doctrine has become a set of fundamental guidelines offering approaches that are valid even beyond the confines of the Church: in the face of ongoing development these guidelines need to be addressed in the context of dialogue with all those seriously concerned for humanity and for the world in which we live.


I have a kinder view, in that I believe that the great Popes Pius IX and X in their statements against the Italian encroachment of the Vatican States and the Concordats led to more intense political statements of the later popes. However, what is clear is that the Bride of Christ has strong views on the role of the individual and the State, and how government should uphold the dignity of every human being, while calling Christians to task to take care of their neighbours. The Pope refers to Justice, which flows from Love: justice is perhaps one of the most misunderstood virtues in our time.


The just ordering of society and the State is a central responsibility of politics. As Augustine once said, a State which is not governed according to justice would be just a bunch of thieves: “Remota itaque iustitia quid sunt regna nisi magna latrocinia?”.[18] Fundamental to Christianity is the distinction between what belongs to Caesar and what belongs to God (cf. Mt 22:21), in other words, the distinction between Church and State, or, as the Second Council puts it, the autonomy of the temporal sphere.[19] The State may not impose religion, yet it must guarantee religious freedom and harmony between the followers of different religions. For her part, the Church, as the social expression of Christian faith, has a proper independence and is structured on the basis of her faith as a community which the State must recognize. The two spheres are distinct, yet always interrelated.
Justice is both the aim and the intrinsic criterion of all politics. Politics is more than a mere mechanism for defining the rules of public life: its origin and its goal are found in justice, which by its very nature has to do with ethics. The State must inevitably face the question of how justice can be achieved here and now. But this presupposes an even more radical question: what is justice? The problem is one of practical reason; but if reason is to be exercised properly, it must undergo constant purification, since it can never be completely free of the danger of a certain ethical blindness caused by the dazzling effect of power and special interests.
Now, finally, we get to the core.


Here politics and faith meet. Faith by its specific nature is an encounter with the living God—an encounter opening up new horizons extending beyond the sphere of reason. But it is also a purifying force for reason itself. From God's standpoint, faith liberates reason from its blind spots and therefore helps it to be ever more fully itself. Faith enables reason to do its work more effectively and to see its proper object more clearly. This is where Catholic social doctrine has its place: it has no intention of giving the Church power over the State. Even less is it an attempt to impose on those who do not share the faith ways of thinking and modes of conduct proper to faith. Its aim is simply to help purify reason and to contribute, here and now, to the acknowledgment and attainment of what is just.
The Church's social teaching argues on the basis of reason and natural law, namely, on the basis of what is in accord with the nature of every human being. It recognizes that it is not the Church's responsibility to make this teaching prevail in political life. Rather, the Church wishes to help form consciences in political life and to stimulate greater insight into the authentic requirements of justice as well as greater readiness to act accordingly, even when this might involve conflict with situations of personal interest.

We have moved very quickly from eros to agape to caritas. But the movement of the heart should be the same. If one loves God and His People, politics is part of the result of living in a society which must be just. As the conscience for the State, the Church is necessary for the natural order of rule. Here is the last part of this discussion on justice before the Pope moves back to caritas and justice.


Building a just social and civil order, wherein each person receives what is his or her due, is an essential task which every generation must take up anew. As a political task, this cannot be the Church's immediate responsibility. Yet, since it is also a most important human responsibility, the Church is duty-bound to offer, through the purification of reason and through ethical formation, her own specific contribution towards understanding the requirements of justice and achieving them politically.
The Church cannot and must not take upon herself the political battle to bring about the most just society possible. She cannot and must not replace the State. Yet at the same time she cannot and must not remain on the sidelines in the fight for justice. She has to play her part through rational argument and she has to reawaken the spiritual energy without which justice, which always demands sacrifice, cannot prevail and prosper. A just society must be the achievement of politics, not of the Church. Yet the promotion of justice through efforts to bring about openness of mind and will to the demands of the common good is something which concerns the Church deeply.