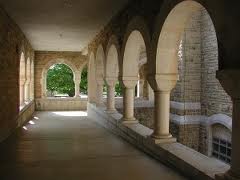 Continuing the examination of how the Church combats socialism, one can see a movement from eros to agape to caritas. The State does not need to step into the realm of personal relationships. Here is the Pope on the issue. I have to admit that one does not see love in the Church at the extent that the Pope describes it, but I have seen this in the past, many years ago when I was in a community. But, the parish life is more fragmented and not all Catholics have a personal, loving relationship with Christ.

We do not need a State which regulates and controls everything, but a State which, in accordance with the principle of subsidiarity, generously acknowledges and supports initiatives arising from the different social forces and combines spontaneity with closeness to those in need. The Church is one of those living forces: she is alive with the love enkindled by the Spirit of Christ. This love does not simply offer people material help, but refreshment and care for their souls, something which often is even more necessary than material support. In the end, the claim that just social structures would make works of charity superfluous masks a materialist conception of man: the mistaken notion that man can live “by bread alone” (Mt4:4; cf. Dt 8:3)—a conviction that demeans man and ultimately disregards all that is specifically human.

The doctrine of the Church never pits poor against rich, but invites all into a loving relationship of brother and sister, joined in caritas.

What concerns me most about certain generations in the States, is the quietism or the non-involvement in politics which is the responsibility of the lay person. A lay person who does not get involved, is not only apathetic, but ignoring the duty to teach and inform public life. Another section follows:

As citizens of the State, they are called to take part in public life in a personal capacity. So they cannot relinquish their participation “in the many different economic, social, legislative, administrative and cultural areas, which are intended to promote organically and institutionally the common good.”[21] The mission of the lay faithful is therefore to configure social life correctly, respecting its legitimate autonomy and cooperating with other citizens according to their respective competences and fulfilling their own responsibility.[22] Even if the specific expressions of ecclesial charity can never be confused with the activity of the State, it still remains true that charity must animate the entire lives of the lay faithful and therefore also their political activity, lived as “social charity”.[23]
The Church's charitable organizations, on the other hand, constitute an opus proprium, a task agreeable to her, in which she does not cooperate collaterally, but acts as a subject with direct responsibility, doing what corresponds to her nature. The Church can never be exempted from practising charity as an organized activity of believers, and on the other hand, there will never be a situation where the charity of er jach individual Christian is unnecessary, because in addition to justice man needs, and will always need, love. 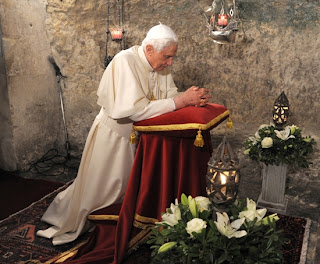 Among some people who are Catholic, a cynicism has seeped into their consciousness regarding political involvement. Now, not all people are called to be involved at intenese levels of activity, but studying the political stands of those for whom one votes, would be the minimum gesture. But, we are called to more than that. We are called a charity which speaks to the State and teaches it. Obviously, in situations as in America today with the great negative challenge to religious liberty, and the abortion laws, one group which must stand united against such evil is the Catholic Church on the local and national levels. St. Paul's description and the description of the early Churches in both the Acts and Revelation reveal complex organizations which cared for all those in need, including widows. This has fallen away in our times as unnecessary, "let the State do it." As we know, St. Benedict brought a revolution in caritas, with the schools and hospitals, which grew up in every country in Europe and the Middle East, and eventually the New World, because of the vision of charity in the Church.

In the Catholic Church, and also in the other Churches and Ecclesial Communities, new forms of charitable activity have arisen, while other, older ones have taken on new life and energy. In these new forms, it is often possible to establish a fruitful link between evangelization and works of charity. Here I would clearly reaffirm what my great predecessor John Paul II wrote in his Encyclical Sollicitudo Rei Socialis [28] when he asserted the readiness of the Catholic Church to cooperate with the charitable agencies of these Churches and Communities, since we all have the same fundamental motivation and look towards the same goal: a true humanism, which acknowledges that man is made in the image of God and wants to help him to live in a way consonant with that dignity. His Encyclical Ut Unum Sint emphasized that the building of a better world requires Christians to speak with a united voice in working to inculcate “respect for the rights and needs of everyone, especially the poor, the lowly and the defenceless.” [29] Here I would like to express my satisfaction that this appeal has found a wide resonance in numerous initiatives throughout the world.

We need to as we say in the Midwest, "get down and dirty" involved in whatever it takes to secure and extend freedoms. I use this platform for such issues as abortion, and the horror of honor killings, among other issues facing our jusdicial system in the States. Catholics ignore issues at their own peril.

Socialism lulls one into thinking that the State will always be on the side of the "little guy". This is a great lie, and as the Christian knows, we are all little in the eyes of God and class warfare is an evil heresy.  To be continued...