A day may come when the courage of Men fails.... 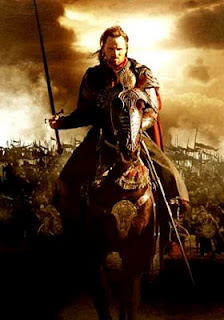 Aragorn: Sons of Gondor! Of Rohan! My brothers. I see in your eyes the same fear that would take the heart of me. A day may come when the courage of Men fails, when we forsake our friends and break all bonds of fellowship, but it is not this day. An hour of wolves and shattered shields when the Age of Men comes crashing down, but it is not this day! This day we fight! By all that you hold dear on this good earth, I bid you stand, Men of the West!


People of the West, the time may have already come when we are breaking bonds of fellowship, forsaking friends...

People in the West use to be able to objectivity judge child abuse when they saw it. There have been laws protecting children and women from abuse for a long-time.

This concept of protection has been lost by the West. Women and young girls are suffering owing to the blind eye of Western men and women in governmental and legal power who are giving in to barbarism
.Either you believe in Western civilization or you do not care

When will this end? We are sliding into pre-Christian eras in some places. Either we believe the West has had better laws, better governments, more freedoms and is a superior way to live, or we do not. Objectively, there are differences. Wake up, people. Not all governmental systems are equal and not all religions are equal when it comes to personal freedoms. It is our duty to protect the weak.

Who cares if a little girl suffers or a wife is beaten?

Who cares? The weak men of this world are allowing this to happen and the feminist women are silent.

Silence means consent. I am saddened that our civilization is rapidly disappearing from bad legal decisions.

And, now this: from the Great S. and Daily Mail in London:


UK: Muslim clerics agreeing to marry girls as young as 12, as long as parents don't tell anyone

As we have seen again and again, wherever Islamic law and Western laws conflict, it is Western laws that must give way. Child marriage is rampant among those who believe that Muhammad is the supreme example of conduct (cf. Qur'an 33:21), but Islamic spokesmen in the West frequently assert that it is a cultural phenomenon that has nothing to do with Islam. They did not, however, tell the mullahs.
"The Prophet wrote the (marriage contract) with 'Aisha while she was six years old and consummated his marriage with her while she was nine years old and she remained with him for nine years (i.e. till his death)." -- Bukhari 7.62.88
Muslims take this seriously and imitate Muhammad in this. Article 1041 of the Civil Code of the Islamic Republic of Iran states that girls can be engaged before the age of nine, and married at nine: "Marriage before puberty (nine full lunar years for girls) is prohibited. Marriage contracted before reaching puberty with the permission of the guardian is valid provided that the interests of the ward are duly observed."
The Ayatollah Khomeini himself married a ten-year-old girl when he was twenty-eight. Khomeini called marriage to a prepubescent girl "a divine blessing," and advised the faithful: "Do your best to ensure that your daughters do not see their first blood in your house."
"The child brides: Muslim mosque leaders agree to marry girl of 12 in Britain... so long as parents don't tell anyone," by Suzannah Hills in the Daily Mail, September 9 (thanks to David):

British Muslim mosque leaders are agreeing to carry out secret marriages with child brides as young as 12 in the UK, it emerged today.

In an undercover investigation, a Shite mosque leader agreed to marry a 12-year-old girl so long as she was a willing participant.
A Sunday Times journalist visited the Husaini Islamic Centre in Peterborough - the 'first Shite mosque in the whole of Europe' - posing as the father of a 12-year-old girl.
According to the newspaper, the reporter was told by Imam Mohamed Kassamali that 'under sharia [Islamic law] there is no problem' in marrying a 12-year-old.
But while he declared Islamic Law dictated a girl should see 'her first sign of puberty at the house of her husband', he admitted they would all get in to trouble if she went to police saying she was forced into the marriage.
He told the parents he would need to meet the bride and groom to be sure they were happy to go ahead with the marriage and urged them to delay having intimate relations until they were older.
When approached by the newspaper he insisted he would only have carried out the ceremony if it was allowed under British law and if both parties had not been coerced into the marriage.
But another retired Imam, Abdul Haque, who worships at the Shoreditch Mosque in east London, agreed to carry out the ceremony on the condition the parents kept it a secret from the authorities.
The Imam urged the undercover reporter to lie about the marriage and keep it a secret.
Haque said: 'Tell people it is an engagement but it will be a marriage.
'In Islam, once the girl reaches puberty the father has the right, the parents have the right, but under the laws of this country if the girl complains and says her marriage has been arranged and she wasn't of marriageable age, then the person who performed the marriage will be jailed as well as the mother and father.'
He then warned: 'Nobody should know about this and the girl must not complain... If she talks in school they will take the girl, social workers will take her and afterwards you and I will be in trouble.'...