Third selection of message to St. Catherine Siena from Christ 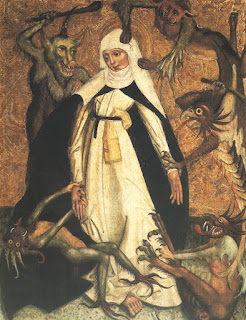 Because of the news from Los Angeles, these bits from Catherine seem timely....
"I have shown to the eye of your intellect a very small part of what happens, and so
small is what I have shown you with regard to what it really is, to the suffering, that
is, of the one, and the happiness of the other, that it is but a trifle. See how great is
the blindness of man, and in particular of these ministers, for the more they have
received of Me, and the more they are enlightened by the Holy Scripture, the greater
are their obligations and more intolerable confusion do they receive for not
fulfilling them; the more they knew of Holy Scripture during their life, the better do
they know at their death the great sins they have committed, and their torments are
greater than those of others, just as good men are placed in a higher degree of
excellence. Theirs is the fate of the false Christian, who is placed in Hell in greater
torment than a pagan, because he had the light of faith and renounced it, while the
pagan never had it.


"So these wretches will be punished more than other Christians for the same sin, on
account of the ministry which I entrusted to them, appointing them to administer
the sun of the holy Sacrament, and because they had the light of science, in order to
discern the truth both for themselves and others had they wished to; wherefore they
justly receive the greater pains. But the wretches do not know this, for did they
consider their state at all, they would not come to such misery, but would be that
which they ought to be and are not. For the whole world has thus become corrupt,
they being much more guilty than seculars, according to their state; for with their
stench they defile the face of their soul, and corrupt their subjects, and suck the
blood from My spouse, that is, the holy Church, wherefore through these sins they
make her grow pale, because they divert to themselves the love and charity which
they should have to this divine spouse, and think of nothing but stripping her for
their own advantage, seizing prelacies, and great properties, when they ought to be
seeking souls. Wherefore through their evil life, seculars become irreverent and
disobedient to the holy Church, not that they ought on that account to do so, or that
their sins are excused through the sins of My ministers." Diallogues 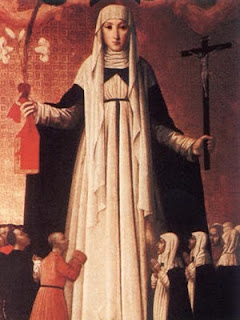