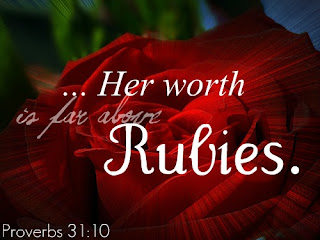 When I was younger, I use to marvel at these handsome men who married less than pretty women. I would think in my adolescent brain, "What does he see in her?" Well, those men had more sense than those who chose for exterior beauty only. These handsome men saw the real beauty of these plain girls-their virtues. Two of my plain friends are extremely holy women.

Listening to Father Chad Ripperger on what type of woman makes a good wife, I was thrilled to hear him say that virtue is more important than beauty. He went so far to say that if a woman is ugly but virtuous, marry her.

This problem of not looking for the virtuous but for the outward beauty for men is that they buy the culture's obsession with beauty instead of virtue. The women of our culture are also obsessed with outward beauty.

As Catholics, we have models of virtuous women, which I shall write about in my next post.

Now, do we have to dress like the Amish? No, and we have had this conversation on this blog before. But, the problem is not merely modesty. The lack of formation from parents allow this preoccupation with outward looks instead of inward beauty. One can look at my series on virtues and formation for more on that subject.

One question has to be, how can we adjust our views either as parents or as women on developing inward beauty? What does it mean to be a virtuous woman?  Fr. Ripperger goes through the famous Biblical passage from Proverbs 31-10-31. This is a good meditation for both parents and daughters.

However, the real problem lies in the predominant faults of pride and vainglory. A parent can actually encourage faults rather than form the opposite virtues. This is a hard lesson for many moms to learn, but frequently they pass on their preoccupation with the latest cloths to their daughters. To be "in" becomes more important than being virtuous. Moms can encourage the predominant faults of pride and vainglory. I am in complete agreement with Father Ripperger on this point. Single men, if you find a virtuous woman, marry her. Do not pass her up if she is not Miss America or poor. In fact, those plain women and poor women may have become virtuous because they were not raised to be princesses. They did not expect the handsome prince because they were and are humble.