What has been lost astounds me daily. For example, the laity at the TLM do not know their own unwritten rubrics, which were passed down for centuries, albeit with local differences.

For example, I try to explain over and over, that when the priest gets up after sitting on the side, the laity stand as well. And, the laity do not say the altar server parts of the TLM.

Sadly, some who have come over from idiosyncratic groups attempt to push their agendas on to the normal role of the laity.

Another odd thing is the insistence of men only in choirs. For centuries, there were women singing in churches. The choir loft was invented so that women could sing and not be in the altar or "monastic choir" area. Also, women and girls, taught by nuns, were sacristans for a long time as well.

Too many lay people have lost the sense of reverence, even in the TLM and either do not discipline their children or talk as soon as Mass is over.

These are all signs of memoricide.

Once a Catholic identity is gone, it has to be set-up again from scratch, which can be difficult. When certain personalities get involved in pushing certain ideals which did not even exist before the so-called watershed of Vatican II, confusion reigns.

Again, I wrote quite a while ago on the false romanticizing of a TLM past. However, we must keep memory of what went before.

I have an unusually excellent memory, which is a gift from God, and as a person who grew up with the TLM, which did not disappear before I was 19, I have tried to discuss lay habits and customs, so that extremes are not put into place and so that some of the older ways are kept. 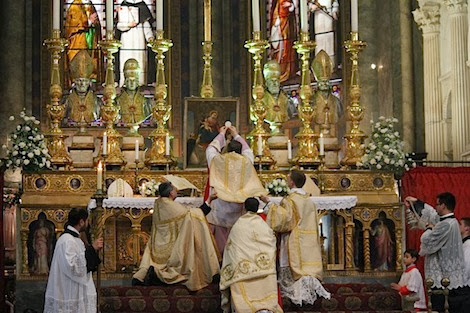 Some younger TLMers become hysterical in their efforts to create something which never existed, while ignoring their own role as parents first.

By the way, us TLM kids learned the Latin before we made our First Holy Communion at age eight.

Why are parents not teaching their children the Latin? I offered to hold a Latin class and no one was interested.