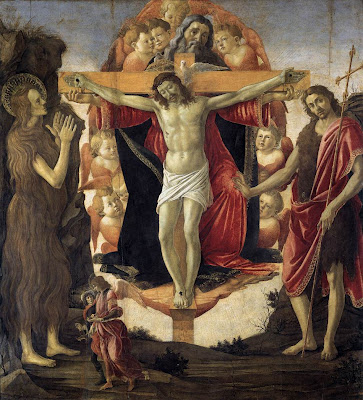 Interesting that St. Angela Foligno writes something which came to me years ago-that God the Father suffered with Christ on the Cross, and that part of Christ’s sufferings were those inflicted by ungrateful children on the Father.

The Trinity did not experience a “separation” because of the Incarnation. Too often, people see the Father, the Son and the Holy Spirit not as Three Persons in One God, but as three gods.

The mystery of the Incarnation includes the involvement of God the Father and the Holy Spirit in the redemption of all humans, as well as the renewal of the earth.

The Three Persons are distinct, but One as well.

When Christ called out on the Cross, “My God, My God, why hast Thou forsaken me,” that was the Humanity of Christ calling out as He was allowed to feel what each human feels when in sin; the supposed abandonment of God.

Christ was not totally forsaken by God, but just as we sometimes feel forsaken because of our sins, so, too, did God the Father allow this suffering to be endured by His Son.

We cannot understand the Trinity. But, we can appreciate the love and commitment of the Father, the Son, and the Holy Spirit in Their Love for us.

Angela knew this, not only intellectually, but in the core of her being.