Doctors of The Church for September: Jerome


St. Jerome, Pray for Us

Some saints are particularly well-suited to intercede for us in these increasingly unsettled times. Jerome is one of those. Pray to him today for help in your own struggles with sin and prayer. Pray to him for Catholic priests who are orthodox, obedient, peaceful, holy. The Co-Cathedral of St. John's in Valletta has the famous Caravaggio of St. Jerome Writing. It must have been a very hot day in the desert. Jerome's supposed cardinal's robe is off his body and his hat on the wall. He was not a cardinal, nor would this dress been the norm in his day. However, the point is that Jerome did not seek after greatness, but served God in study. I put that painting in yesterday's post on Jerome.

A great little article may be found here.  http://www.americancatholic.org/messenger/Sep1997/feature2.asp

And, wiki has a fascinating article of the painting.  http://en.wikipedia.org/wiki/Saint_Jerome_Writing_(Caravaggio,_Valletta)

Here is a snippet from the first article. He once described the heretic Pelagius as the most stupid of persons whose wits were dulled by too much Scottish porridge.

By the way, Jerome is probably the "brainiac" of the Doctors of the Church. And, if you see a painting of him with lion, there is a legend that after he took a thorn out of this lion's paw, it became his pet.

However, the lion is a symbol of St. Jerome's status in the Church-we owe him our Bible, the Vulgate, for one thing, and the example of friendship in the Lord. He was friends for years with St. Paula. One of Jerome's most famous letters is to her daughter. 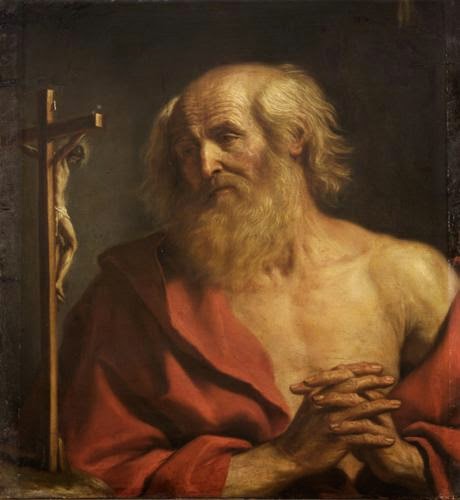