Doctors of The Church for September; John Chrysostom

Again, in John Chrysostom's commentary on the Acts, we see a progression of holiness, the calling of the Apostles to fast, pray, watch for the coming of the Holy Spirit. What better way to describe the Dark Night of the Soul than this waiting, this preparing for Christ? 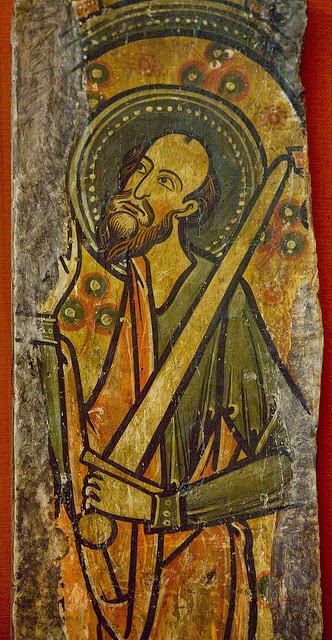 For it cannot, it cannot be, that a man should enjoy the benefit of grace except he watch. Seest thou not what Elias saith to his disciple? “If thou see me when I am taken up” (2 Kings ii. 10), this that thou askest shall be done for thee. Christ also was ever wont to say unto those that came unto Him, “Believest thou?” For if we be not appropriated and made over to the thing given,20 neither do we greatly feel the benefit. So it was also in the case of Paul; grace did not come to him immediately, but three days intervened, during which he was blind; purified the while, and prepared by fear. For as those who dye the purple first season with other ingredients the cloth that is to receive the dye, that the bloom may not be fleeting;21 so in this instance God first takes order that the soul shall be thoroughly in earnest, and then pours forth His grace. On this account also, neither did He immediately send the Spirit, but on the fiftieth day. Now if any one ask, why we also do not baptize at that season of Pentecost? we may answer, that grace is the same now as then;22 but the mind becomes more elevated now, by being prepared through fasting. And the season too of Pentecost furnishes a not unlikely reason. What may that be? Our fathers held Baptism 8to be just the proper curb upon evil concupiscence, and a powerful lesson for teaching to be sober-minded even in a time of delights.
As if then we were banquetting with Christ Himself, and partaking of His table, let us do nothing at random, but let us pass our time in fastings, and prayers, and much sobriety of mind. For if a man who is destined to enter upon some temporal government, prepares himself all his life long, and that he may obtain some dignity, lays out his money, spends his time, and submits to endless troubles; what shall we deserve, who draw near to the kingdom of heaven with such negligence, and both show no earnestness before we have received, and after having received are again negligent? Nay, this is the very reason why we are negligent after having received, that we did not watch before we had received. Therefore many, after they have received, immediately have returned to their former vomit, and have become more wicked, and drawn upon themselves a more severe punishment; when having been delivered from their former sins, herein they have more grievously provoked the Judge, that having been delivered from so great a disease, still they did not learn sobriety, but that has happened unto them, which Christ threatened to the paralytic man, saying, “Behold thou art made whole: sin no more, lest a worse thing come unto thee” (John v. 14): and which He also predicted of the Jews, that “the last state shall be worse than the first.” (Matt. xii. 45.) For if, saith He, showing that by their ingratitude they should bring upon them the worst of evils, “if I had not come, and spoken unto them, they had not had sin” (John xv. 22); so that the guilt of sins committed after these benefits is doubled and quadrupled, in that, after the honour put upon us, we show ourselves ungrateful and wicked. And the Laver of Baptism helps not a whit to procure for us a milder punishment. And consider: a man has gotten grievous sins by committing murder or adultery, or some other crime: these were remitted through Baptism. For there is no sin, no impiety, which does not yield and give place to this gift; for the Grace is Divine. A man has again committed adultery and murder; the former adultery is indeed done away, the murder forgiven, and not brought up again to his charge, “for the gifts and calling of God are without repentance” (Rom. xi. 29); but for those committed after Baptism he suffers a punishment as great as he would if both the former sins were brought up again, and many worse than these. For the guilt is no longer simply equal, but doubled and tripled.23 Look: in proof that the penalty of these sins is greater, hear what St. Paul says: “He that despised Moses’ law died without mercy, under two or three witnesses: of how much sorer punishment, suppose ye, shall he be thought worthy, who hath trodden under foot the Son of God, and hath counted the blood of the covenant an unholy thing, and hath done despite unto the Spirit of grace?” (Heb. x. 28, 29.)