Yes Another Repost for Today

The Saints of The Knights of Malta Part Two 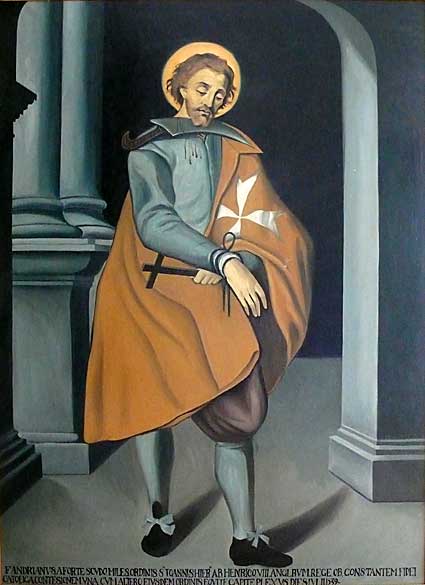 Adrian Fortescue was born around 1480, the son of Sir John Fortescue of Punsborne, Hertfordshire. He was made a Knight of the Bath in 1503 and was high in the favour of King Henry VIII, taking part in the Wars of England against France in 1513 and 1523. His personal piety is attested by his Book of Hours which survives with devotional maxims in his own hand. As a cousin of Anne Boleyn, he was present when she was crowned as Queen in 1533. Sir Adrian was twice married and had seven children. He became a confrater of the Dominicans of Oxford in 1533. In 1539 he was attainted of High Treason without trial, by an Act of Parliament which condemned fifty persons opposed to Henry VIII's ecclesiastical policies. Adrian Fortescue was beheaded on Tower Hill, London on Wednesday 9 July 1539, together with the Venerable Sir Thomas Dingley, a Knight of the Order. The Order of St. John of Jerusalem has considered Sir Adrian as a martyr and has promoted devotion to him at least since the early seventeenth century as a member of the Order. Leo XIII declared him Blessed on 13 May 1895.

For more information click here, including a translation of Mgr Ducaud-Bourget's biography of Bl. Adrain.

COLLECT OF THE MASS

O God, since all things are within your power, grant through the prayers of blessed Adrian, your martyr, that we who keep his feast today may become stronger in the love of your name and hold to your holy Church even at the cost of our lives. We ask this through our Lord Jesus Christ your Son, who lives and reigns with you and the Holy Spirit, one God, for ever and ever. Amen.