Today's Response from The Office of Readings-Waiting From the altar of God, I heard the voices of those who had been killed, saying: Why do you not avenge our blood? And they received this answer from the Lord: Wait a little longer, until the total number of your brothers and sisters has been reached, alleluia.

They were given a white robe and told: Wait a little longer, until the total number of your brothers and sisters has been reached, alleluia.


If you, Dear Readers, are not taking advantage of the graces of daily Mass, which some of us desire to attend but cannot, you are passing up a higher place in heaven. The same is true for every hour spent before Adoration.


Passing up chances for grace is a sin of omission and time-wasting. Too many Catholics live in the presumption that they will be saved and go to heaven. We can never be sure of our salvation until we die.
Last week, I noted some passages from Spe Salvi, and this week I return to Garrigou-Lagrange on hope and predestination. Some people caught in pride, fall back and forth between presumption and discouragement. Here is the Dominican on this point.

Since we have spoken of the spirit of faith, it is fitting that we
consider what hope in God, or confidence in Him, should be in proficients, and that we state precisely what must be understood by the certitude of hope, which is based on that of faith and has a character sui generis which it is important to note.

Infused hope, no less than faith, is necessary to salvation and perfection. Moreover, to have a generous interior life, it is not sufficient to hope in God weakly and intermittently, as so many Christians do. His often obscure and occasionally disconcerting good pleasure must be loved, accepted with a spirit of filial submission, and the divine help awaited with a firm, humble, and persevering confidence.

Some of the many Jesuit martyrs below... 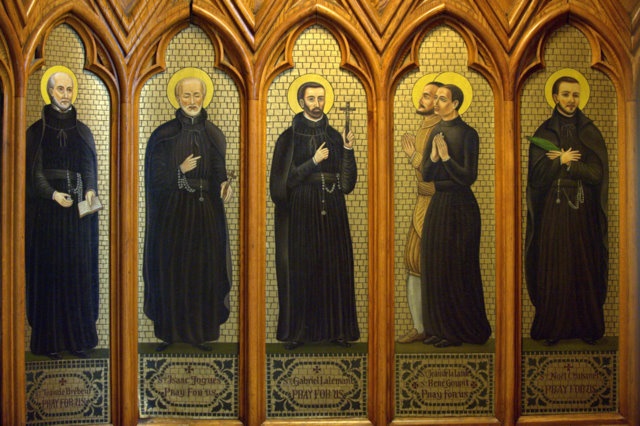 DEFECTS TO BE AVOIDED

In connection with this virtue, we should avoid two contrary defects: presumption and discouragement. By noting them at the beginning of our discussion, we may see more clearly the true nature of hope, which rises like a summit between these opposing deviations.

There are two kinds of presumption: either man relies excessively on his own powers, like the Pelagians, not asking as much as he should for the help of God, not recalling sufficiently the necessity of grace for every salutary act; or, on the other hand, he expects from the divine mercy what God cannot grant: for example, pardon without true repentance, or eternal life without any effort to merit it. These two forms of presumption are mutually contradictory, since the first presumes on our strength, whereas the second expects from God what He has in no way promised.

Moreover, when trial and contradiction come, the presumptuous fall into the opposite defect, discouragement, as if the difficult good (bonum arduum), which is the object of hope, becomes inaccessible. Discouragement might lead to spiritual sloth, to acedia, which makes a man judge the work of sanctification too difficult and turns him away from every effort in this direction. He might thus even fall into despair. Many souls oscillate thus between presumption and discouragement, and never succeed in arriving, at least practically, at a true notion of Christian hope and in living by it as they should.
THE TRUE NATURE OF CHRISTIAN HOPE

Less is said about the virtue of hope than about faith and charity. Yet hope is of great importance. Most certainly Christian hope, as an infused and theological virtue, is essentially supernatural, and consequently immensely surpasses the natural desire to be happy and also a natural knowledge of the divine goodness.

By infused hope we tend toward eternal life, toward supernatural beatitude, which is nothing less than the possession of God: seeing God immediately as He sees Himself, loving Him as He loves Himself. We tend toward Him, relying on the divine help which He has promised us. The formal motive of hope is not our effort, it is God our Helper (Deus auxiliator et auxilians), according to His mercy, His promises, His omnipotence.(1)

Thus we desire God for ourselves, but first for Himself; for He is the last End of the act of hope, which should, moreover, be vivified by charity: (2) in other words, by hope, we desire God, our last End, not by subordinating Him to ourselves, like the food necessary to our subsistence, but by subordinating ourselves to Him. Thus it is evident, in contradistinction to the teaching of the quietists, that hope, although inferior to charity, contains nothing inordinate. It is a lofty virtue, though not the greatest of all.

Since, in fact, among the moral virtues, acquired magnanimity, and especially infused magnanimity, has a high place, so far as it makes us tend to great things (as we see in the founders of religious orders, in their works and struggles); with even greater reason, infused hope is a lofty virtue that makes us tend not only toward great things, but also toward God Himself to be possessed for eternity. This truth is emphasized by the fact that hope does not make us desire only an inferior degree of supernatural beatitude, but eternal life itself without fixing the degree. Indeed it leads us to advance always more generously toward God by giving us a greater desire for Him. Three Ages of the Interior Life

To be continued this week...
See also this...http://www.speroforum.com/a/COAKSGQWVV7/75602-Coptic-Church-recognizes-sainthood-of-martyrs#.VTUEhyFViko