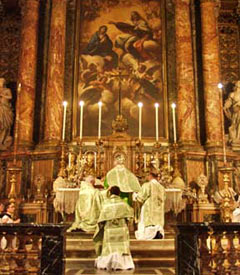 I am at the Latin Mass Conference in London. I shall report on five talks and may not blog tomorrow because of this great effort. Number five may either be on today or tomorrow, depending on my time. But, the first four are here. Enjoy!!!!

The first speaker, Dr. John Rao, the Director of the Roman Forum found here. The forum has been in existence since 1969 as a bastion of Catholic culture and the Latin Mass. The topic that he chose for the conference is from darkness to light. He spoke of the pilgrimage of our lives, how we chose our paths and our life mission, involving the Liturgy of the Catholic Church. He approached the subject in three steps. He noted that the Traditional Liturgy plays a part in the opening or enlightenment. The second section was on the counter-pilgrimage of the new liturgy, The third step he noted was the need to work with ourselves and others on this movement.

First, he noted that we need to take seriously the theme of Scripture that the Kingdom of God is at hand at the moment which requires conversion. I have noted this before on this blog, the idea that personal conversion is demanded of all of us by our baptism. The early apologists such as Ireneaus and Justin Martyr pointed out, as Dr. Rao noted, This requires community, in the movement to find Beauty and Goodness are to the individual as well as the community. Dr. Rao used the Allegory of Plato's Cave, the famous treatise, wherein Plato admitted we needed a God to save us. From the Father of Lights, comes the Word of God, the Incarnate One, to take us into the light of grace.

Dr. Rao said that people have to learn how to use nature and all the gifts and tools of God by abandoning ourselves to God.

Through Christ we can marshal everything given to us in nature. This is hard work, as many of the saints have noted and as we know from experience. We have to reach out to others, of course. Dr. Rao emphasized the hard work of defeating the downward movement of slumber or darkness. What has this to do with the Latin Mass? Liturgy is an expression of the community, as we know from Greek history.

The TLM has been of the primary value of moving people to Christ, and this is a paraphrase of Dr. Rao. He stressed that the pedagogy, the teaching is important, but the Liturgy, the TLM is focused on the Trinity. We are influenced, moved to serve God through our natural gifts through the TLM. Those of us who desire and want to go to the TLM regularly know that this is true, That the Liturgy forms us, gives us a spirituality, forms our community.

Step two in his talk, people were revolted by Christianity and were against the popular acceptance of Catholicism. He called them sophists, the historical title for those who want light without Christ. I am glad Dr. Rao referred to the Socratics, as I am of that background of exploring Faith through the Rational. He rightly pointed out that the wordsmiths used words to create negativity towards Christianity, co-opting the Faith. (I call these the Post-post Moderns and the Deconstructionists).

These negative philosophers are, as I note here over and over again, really hate the Truth, Who is a Person.

Dr. Rao correctly showed the long history of these twists, to the Enlightenment, and to our modern day hodge-podge of modern science and technology, pulling us into fragmentation and darkness. He made the connection to modern liturgy, which was influenced by divisions in the Christian world--in other words Protestantism. He had an interesting note on the Catholics looking for success in bringing in large groups of people in the 1920s and 1930s. Of course, as I thought during his talk, there was a revival of Catholicism in England and France at that time, with people, (and I am adding this here, as he did not refer to these men, Dawson, Belloc, Maritain, Gilson).

Dr. Rao claimed that the new liturgy was a result of the loss of vision and furtherance of passions, which we here on this blog can all agree upon. The third step in his talk had to do with engaging seriously in personal transformation of the environment around us. He claimed that we are split in our Catholicism. I am always writing about this on this blog.  WE DO NOT THINK LIKE CATHOLICS-- one of my themes on my blog.

I shall continue to report on the Latin Mass Conference all day.