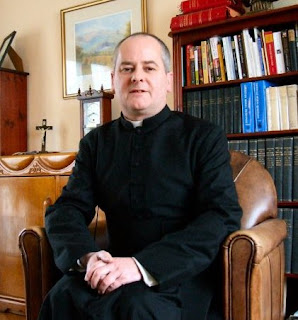 The great blogger, parish priest, dean and other things, Father Tim Finigan gave a talk on the TLM in a NO parish.

Father Tim talked about the fact that he is a parish priest of a parish, who said the NO and is now the TLM priest. His life changed at a time when members of the LMS approached him and he was asked to have a Tridentine Mass for a funeral. He said he had two weeks to prepare, although he knew Latin, studying in Rome under Fr. Reginald Foster. And Michael Davies was at the Mass and after that Fr. Tim celebrated the TLM. This rest is history, as one says.

He said it was an immediate conversion to the TLM. For many priests, he said, there is such an emphasis on the adoration of God, and the personal sinfulness of the priest, his unworthiness to offer Mass. Father said even the private prayers before Mass express this.  January of 2002 was his first TLM.

He noted that the NO was then celebrated in a better way. With this change, the emphasis was more on the priesthood of Christ, rather than on the people. This was all before the Summorum Pontificum. By July 2007, the parish was ready for the regular TLM in this parish at Blackfen.

Father Tim noted the photos of the Last Supper and the famous paintings that people thought this was a relaxed way, the proper way to have Mass. What people forgot, Father Tim said, was that the Passover Feast was a highly liturgical meal, with many rules and rites.

Everything about the Last Supper was clear and formal.

Father Tim wrote a long piece on the liturgy, which should be published, by the way, and has not been. "That was not my Mass" was an article in The Tablet, to which Father referred. I remember reading this article and recommend it.

Father talked about 321 responses to a survey in his parish, which was approved by his bishop. One of the questions was how the people felt about the TLM in the parish,and  many were highly in favor. He said that the age range was interesting. The older the people, the more they were against. While the youngest group were most in favor. This is now commonplace knowledge.

The most revealing answer had to do with division in the parish because of the TLM, which is said today. 41% said they did not realize there was a controversy. (many laughs here) 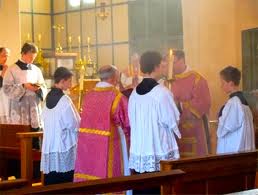 Catholics for a Change in Church was the group against the change originally. This is a radical group, like some in the States.

Father Tim has a variety of Masses in his parish, including an NO ad orientem.


He noted that mutual enrichment has happened in his parish because of the TLM.

The idea of singing the liturgy, instead of singing at the liturgy, that is hymns, took shape. He introduced English to Psalm tones with the introit, for example. Father said that the prayers of the priest in the NO changed for him, as it matters what the priest is at the Mass.

Father reminded us that the Liturgy is not just the Mass and that at his parish he has Vespers in Latin. He also uses the old rite of Baptism and has the TLM for Marriage. This is an important difference which can be discussed in another post. Father went on to discuss the use of sacramentals. Father also mentioned the TLM emphasis on sin and the success of the Counter-Reformation and the teachings connected to the TLM. He mentioned the emphasis on the Four Last Things, which has been lost. His emphasis on the spirituality of the TLM and Trent was great and a much needed conversation. This is a huge subject which I hope he continues on his blog.

This good priest and great blogger encouraged the audience and gave many of us hope for the future of the TLM is our regular parishes. So may it happen.