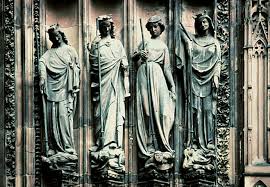 The second state of the normalized child is concentration. Barring a learning disability, and in a house with no television, the normal time for a three year old to concentrate on one thing is 45 minutes.

To help such development, it is not enough to provide objects chosen at random, but we [teachers] have to organize a world of 'progressive interest' (The Absorbent Mind, p. 206)

What usually breaks a child's ability to concentrate is the parent herself.

One thing about home schooling is that one cannot rush a child in early learning stages.

For example, I was making land forms with my three-year old son and he was learning vocabulary and the reality of peninsula, island, gulf, isthmus, cape, strait, bay, and lake with clay and water. There are myriad sites which tell you how to do this at home. I am delineating virtues and concentration. Now, after making and baking the clay forms, when these are dry, the child pours water into the small containers, (I used aluminium baking tins), and does this in silence first. Vocabulary and cards for labeling follow.

Concentration went over an hour, and then longer. The child was basking in concentration, peace, patience (emptying the water and pouring again and so on). Zeal and integrity as well as confidence grew. Then, when I suggested it was time to do something else, the child was so happy, that he agreed. Of course, he helped clean up and obedience in that and putting away the items followed.

But, one must give time to the natural love of learning and the natural concentration. Schools ruin these and once lost, these are almost impossible to regain.

When the Dorset Council education lady came for the first visit, as required, the child showed her the 1,000 chain which takes a long time to set up with the cards. At three and a half, he did it all by himself. She was delighted at both peace, concentration, zeal, order, confidence, and obedience.

The child showed her a portfolio of other things he had learned, such as parts of a bird, shapes, colors, numbers, and so on. I did not have to say a thing. He took her by the hand and showed her other things in the school room which he could do-I just watched.

Concentration, if not interrupted, lasts a life-time as do the virtues learned. And, when the child knows peace, he can share with others, and be charitable.

Obviously, older children helping with the younger ones teaches virtue as well. The great virtue of charity and the lesser one of generosity come when the older ones help the younger ones. Patience and hope are also encouraged by sharing and helping. The older ones cannot always see how their patience helps, but such activities build hope.

My son contracted a serious illness at the age of nine. His life changed from one of a normal child to a child in pain and in a wheelchair off and on for four years.  For eleven years, he had health issues from that original illness. Thankfully, he was finally free of all of those. But, the virtues  the formation of patience and courage, learned in simple things, like early sensorial and practical life training, geography and math studies, helped him through harder times.

As a teacher, it was so hard for me to see students who no longer wanted to learn. Their natural gift of wanting to learn and find God had been destroyed by the school systems.

One of the things I did was become a consultant for classical education and the Socratic method, helping schools either from scratch or change from newer forms of methodology back to classical and Socratic methods. Parents were shocked when they saw their children regain a love of learning after one half-semester.

All I did was see the drive which was latent and encourage that God-given gift.

I have wonderful stories of even junior-high boys wanting to learn religion, Latin, and literature because the desire for learning was re-kindled in them. The same thing was done with high school students, young men and young women. All I did was fan the little sparks which became flames.

The key is respect for what God has given and cooperation with that gift.

God gives grace, but we have to cooperate with that grace.