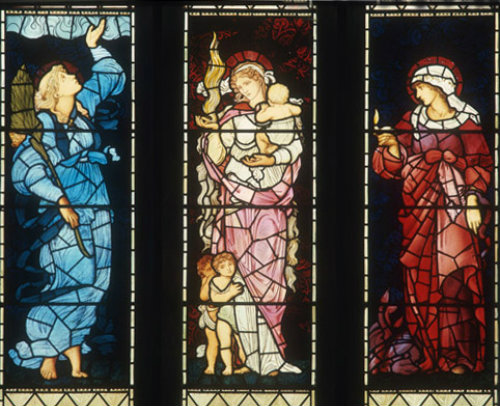 Looking at all the possible ways of encouraging the virtues, one sees the need to create a pattern of hands-on activities and studies leading to the formation of the Catholic child.

Teaching virtues through the use of the senses and practical life skills may see obvious to most parents. When the child is learning to pour milk, he is learning patience and temperance.

When the child is learning to put his work back on the shelf, he is learning obedience, perseverance, patience, temperance. And so on....

The small chart in a previous post early yesterday shows the sensitive periods of the child's growth. In each of those, virtues can be encouraged. Remember two things: the child has the gift of the virtues from baptism, and he wants to learn these through grace and his natural hunger for God.

Learning small and large motor/muscle movements also develops patience, and in a family of more than one child, justice and mercy are soon learned as part of sharing. Indeed, charity is one of the first virtues obviously learned through sharing and selflessness.

Even pushing a chair back in under the table, and bringing dishes to the sink form the child in virtue.

I want to emphasize, however, in the next few posts the learning of virtues through the subjects the child learns before eight.

All things that the child does is for the creation of the man he will become. The parent guides that process

Let me start with language skills, such as speech, reading and writing, which I shall put under the title of Grammar.

The time for a child's sensitive period in language skills is early, between one-and-a-half and three. This process is enhanced by the parent using all the material at hand, which I said could be found on the Montessori sites. But, what I want to emphasize is the beginning of virtue formation.

How does this happen? Going back to the four abilities of the normalized child, one sees that the first is the love of learning. This is God-given and encouraged by the parents.

In language formation, the child begins by imitating the parent and other children in the house, if there are some siblings.

What the parents are doing is cooperating with nature in the development of these language skills which quickly move from speech to reading and writing. By five or six, this initial process is mostly finished with the proper tools, but I am repeating a bit here for emphasis.

The first characteristic of the process of normalization is love of work. Love of work includes the ability to choose work freely and to find serenity and joy in work (The Absorbent Mind, p. 202).

The problems occur when the parents do not cooperate with the sensitive periods or when there are outside influences which interrupt the love of work. The virtues help stem deviations.

All children want to learn, but this is ruined early in some cases by deviations. Here is a list from this website. http://montessoritraining.blogspot.ie/2008/04/deviations-in-normalization-process.html#.UiOfGTasim4

There are several deviations that are not fostered by adults and are often seen as "normal" stages of development. Dr. Montessori referred to these as deviations as fugues and barriers (The Secret of Childhood) and deviations that are demonstrated by the strong and the weak (The Absorbent Mind).

Now, I do not need to emphasize the negative, as deviations can be controlled in most cases by virtue formation. What the parent-teacher does is gently help by emphasizing not the negative, but the opposing virtue.

For example, if a child is not still, which is abnormal and not normal, the parent needs to determine if the child has enough time for large motor movement, such as walking, dancing, playing outside and so on. Most Americans are good about such things as sport, but may not realize that simple tasks or chores can give the very young child the same needed motor movement.

The parent guides the child to the opposite of the problem through a gentle arrangement of the situation. Many parents know how to do this automatically, but if a virtue is in mind, it becomes easier.

The child's body, mind, and soul cry out for order and discipline, but never in anger from the parent, and always with patience.

For example, a two year old throws her work across the room in frustration. Ask yourself why, do not merely discipline. There is a reason for every action. Does she need more physical exercise? Is she tired? Does she not understand the work?

In homeschooling I learned a simple rule very fast, and here it is.

The biggest reason for deviant behavior is boredom.

And, here is the corrollary which must be learned by the parent.

Boredom is caused by two things-and this is very important, parents.

Boredom is caused because the child wants to learn but the material is too hard.

Boredom is caused because the child wants to learn but the material is too easy.

I learned this in Montessori teacher training and applied it to home schooling.

Help the child develop patience and perseverance, moving into that love of learning, which is the first characteristic of the normalized child.

So, if the language materials are too easy, the child may be frustrated. She might not be able to say, "I know all this, Mom!"

Or, if too hard, the frustration is real as well. Go back and try other methods of showing that same skill.

And, in yourself and in the child, emphasize, even verbalize, the corresponding virtues. One can say, "Let us be peaceful and look at this....".

I shall look at the other three characteristics of the normalized child in the next  several posts.