On drama and perfection....subjectivity and objectivity Supertradson, who has considerable acting skills, played Dr. Chasuble in The Importance of Being Earnest in high school. I wonder if the Anglicans will do a version of Chasuble as a woman and Miss Prism as a man. Who knows.

But, one of my favourite scenes in this crazy play is the one between Cecily and Algernon concerning how bad he is supposed to be, as the mysterious "Earnest" younger brother of Jack, who has set up this pretence. If you remember, Cecily is Jack's young ward. My favourite version of the play is the 1951 production.

Anthony Asquith was  director and Dorothy Tutin was Cecily

Dorothy Tutin also did my favourite version of Anne Boleyn, playing her as a highly intricate and intelligent woman, which I think she was in all of her scheming. The other great actress in this play by Wilde is Joan Greenwood.


Here is the Earnest scene to which I refer with Dorothy Tutin.

Cecily. I don't think you will require neckties. Uncle Jack is sending you to Australia.
Algernon. Australia! I'd sooner die.

Cecily. Well, he said at dinner on Wednesday night, that you would have to choose between this world, the next world, and Australia.
Algernon. Oh, well! The accounts I have received of Australia and the next world, are not particularly encouraging. This world is good enough for me, cousin Cecily.
Cecily. Yes, but are you good enough for it?
Algernon. I'm afraid I'm not that. That is why I want you to reform me. You might make that your mission, if you don't mind, cousin Cecily.
Cecily. I'm afraid I've no time, this afternoon.
Algernon. Well, would you mind my reforming myself this afternoon?
Cecily. It is rather Quixotic of you. But I think you should try.
Algernon. I will. I feel better already.
Cecily. You are looking a little worse.

The point of referring to these two plays has to do with a perception of perfection. In the first, by Wilde, who repented and died a Catholic, the silliness of the play undermines the seriousness of salvation. Clever Wilde used words to make a point in favour of materialism and the now. But, he is reflecting the growing materialism of his time and the superficiality of life based on that. Victorian religion was becoming separated from ""real life as we know it."

In the second, the scene taken from the superb Six Wives of Henry the Eighth, the best of all those done on that theme, we encounter a repentant  although Protestant Anne, regretting her sins and asking for the mercy of God. In both plays, there is no fixed understanding in the characters of the need for a perfect life, but merely one of earnestness, zeal, or sadly, materialism.

But, Wilde is a satirist, making fun of the growing Victorian hypocrisy of his time. And, the writer of that episode of the BBC series on Anne Boleyn wants to show her in a different light than merely the woman who was partly responsible for the ruin of the Church in England.

What is missing is the fact that only the perfect see God. Satire shows us our faults as individuals and societies, and serious plays try to help us understand a time and the individuals who both created and were victimized by those times.

What the search for perfection does is to help us transcend the times and the societies in which we find ourselves. The journey to perfection makes us objective and without objectivity, one cannot become a saint.  Only those who can stand back and judge themselves and situations objectively, which is with the Mind of Christ, can become holy.

The prevalence of subjectivism today is more than serious; it is a deadly mind-set. Those who can only judge from the subjective cannot become holy-if the only criterion is one's own opinion, one is not thinking with the Church or in the Mind of Christ. 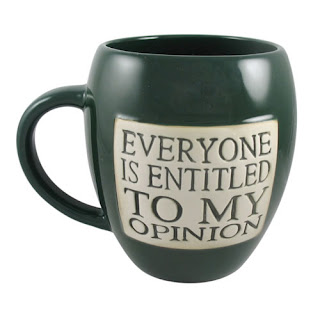 I am truly concerned about the present youth who cannot and will not think objectively. If you have adolescents or teens or young adults in college, please make sure they can think. Start young, before the age of reason. Otherwise, we shall lose this generation entirely.

Satan is subjectivity personified. Non serviam. His subjective decision not to follow God ended in tragedy and eternal pain for him. Let us pray for those youth who cannot see beyond their own opinions. They have endangered their own salvation.

What if frightening is that these individual opinions are given the same weight as objective truth. Today, on an Irish radio channel, the opinion of one bad reporter trumped various attempts to pin down the Truth in an interview. Her opinion was more important than even possible research and factual evidence. This is the end of freedom. If a people cannot judge between ideology and truth, the end is nigh for this civilization. That is what happened in England during the Protestant Revolt. One man's opinion held sway over objective Truth. The ruin was complete. Robert Hugh Benson, in his novel, calls it The King's Triumph. Now, we shall see the triumph of the Prince of Darkness, unless Catholics begin to think like Catholics-objectively.