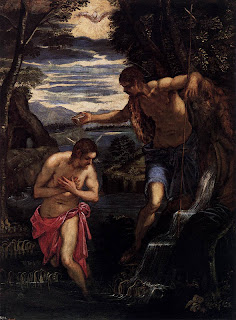 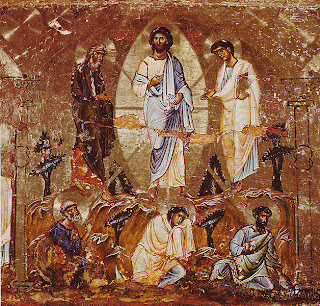 Above is an icon of the Transfiguration. Christ left the glory of the Trinity to share Himself with us in the Incarnation. The ultimate charity is sharing who we are with others, not merely what we have materially. We have the lives of the saints to show us charity in action. We need only think of the Little Flower and her little way of accepting daily crosses and offering up sufferings to God. We have the charity of the great St. Vincent de Paul, or the love in action of St. Francis travelling to the Saladin in order to convert him. We have the example of the French Jesuits, who even after returning to France, came back to the States and were killed in horrible ways. But, charity can mean the simple acceptance of the loved one for who he or she is. The acceptance of another human being, the recognition and encouragement of that person's uniqueness and gifts, is also charity.

On the Indwelling of the Holy Trinity: thoughts for Lent

Posted by Supertradmum
Theophoroi” or God-bearers. When was the last time you heard a sermon on the Indwelling of the Trinity? I referred to this Truth of the Catholic Church before on this blog, but I return to it today after several discussions with lay friends who had never heard of this before. 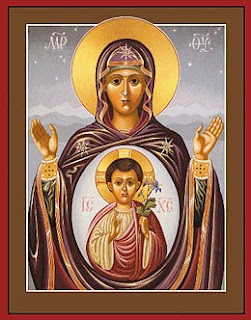 Garrigou-Lagrange is my basis for explanation, but we have the Fathers of the Church, and the Scriptures as the foundation of all following teaching. The great Dominican synthesizes centuries of teaching. I am not going to emphasize the Indwelling of the Trinity is all created things, but in the specific soul which is Baptized into Christ. Garrigou-Lagrange notes the Scriptures relating to the Coming of the Spirit in the Gospels, and particularly the Priestly Prayer of Christ in the Gospel of John. But, I want to move on from the references to the Holy Spirit and comment on the Indwelling of the entire Trinity, the Father, the Son and the Holy Ghost. But, before I do that, I want to look at Garrigou-Lagrange's shedding light on the foundations necessary for this Indwelling.

Obviously, only those who are Baptized, and I capitalize the word for emphasis, have this Indwelling. But, there is more to the Life of God in each one of us than the first Sacrament of Initiation. The spiritual writer notes St. Thomas Aquinas, stating, that Pope Leo XIII (why is he not canonized?) used Thomistic explanations in his encyclical on the Holy Spirit Divinun illud munus: For God is in all things by His essence, power, and presence, according to His one common mode, as the cause existing in the effects which participate In His goodness. Above and beyond this common mode, however, there is one special mode belonging to the rational nature wherein God is said to be present as the object known is in the knower, and the beloved in the lover. And since the rational creature by its own operation of (supernatural) knowledge and love attains to God Himself, according to this special mode, God is said not only to exist in the rational creature, but also to dwell therein as in His own temple. So no other effect can be put down as the reason why the divine Person is in the rational creature in a new mode, except sanctifying grace. . . . Again, we are said to possess only what we can freely use or enjoy: but to have the power of enjoying the divine Person can only be according to sanctifying grace.

The great heresies of our time deny the need for sanctifying grace for salvation or for spiritual growth. Someone commented to me one time that to “be good” was the only thing necessary to get to heaven. Sadly, this is not the case, nor are the young taught, even in so-called Catholic schools, the real need for the Sacraments.

Notice in the above selection that the term “rational” in relationship to human nature is clearly delineated. Why? Catholicism stresses knowing God and loving Him, not merely experiencing Him in some sort of Quietist or Pentecostal manner. Do we not want to know everything about a person we love? Do we not want to find out all about that person? That sanctifying grace moves us to knowledge of the Indwelling of the Trinity demands that we receive the Sacraments on a regular basis. Without sanctifying grace, the initial gift of God at Baptism is starved of spiritual food.

Garrigou-Lagrange is clear that we all share in the Indwelling of the Trinity, only in degrees. This is true not only of all of us, but of the saints. The saint who has the fullness of the Indwelling of the Trinity is, of course, the Theotokos, the Mother of God. That the Doctors of the Church exhibit this rational knowledge and are God-bearers in a smaller sense than Mary, Mother of God, indicates a degree of holiness. But, Garrigou-Lagrange shows us over and over again, that all are called to such holiness, albeit in different degrees. God-bearers is the term quoted from St. Ignatius of Antioch, who used the term “theophoroi” or God-bearers. This term applies to us, the members of the Church Militant today, in 2012. I include an icon of St. Joseph of Arimathea, who brought Christ and the Grail to England. He, indeed, is a model God-bearer. To be continued...