Posted by Supertradmum
“Very grave trials await the Church. What we have suffered so far is almost nothing compared to what is going to happen. The enemies of the Church are symbolized by the ships which strive their utmost to sink the flagship. Only two things can save us in such a grave hour: devotion to Mary and frequent Communion. Let us do our very best to use these two means and have others use them everywhere.”  St. John Bosco

Report from a friend re: Walsingham 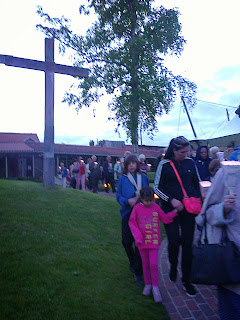 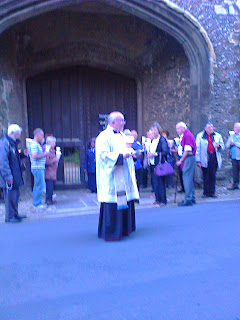 I knew when I went to Walsingham this year it would be different.  The reason being that the new shrine director is Mgr John Armitage. He is from the east end of London. Similar to the Bronx in New York.  He was used to every day being challenge.  He has set himself a challenge in Walsingham.  When I went to the first mass of the retreat our group was one of many groups who had come that day.  One of the groups was one of the largest which had come for quite a while because it was the Brentwood Diocesan pilgrimage, Mgr Armitage's last Diocese.  They not only came out to see him,but it was lead by Bishop Alan Williams, who in his previous role, was the shrine director of Our Lady of Walsingham.

It was the wonderful feast of Pentecost.  After the mass, Mgr Armitage introduced everyone to the 'blue bucket'.  Plans are afoot to make huge improvements to the shrine (not before time) to the amount of £10 million.  He has a bit to go, but with his enthusiasm the goal will become closer by the day.  I know that I went home with a totally empty purse.  Not a bean was left in it.  Well I did have a couple of medals in it so I held on to them in the hope that it wouldn't be empty for long............and it wasn't.  God is good. 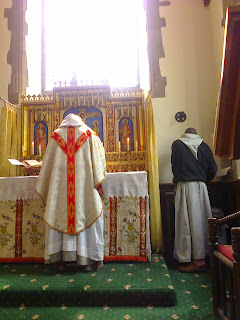 After a short service in the Annunciation church in Little Walsingham, candles were lit and the procession wound its way through the village, stopping for a history lesson outside the Abbey grounds to remind all of us how much suffering went on during the reformation. Behind the coach park is what is called the 'Martyrs Field'.  The long procession continued towards the Anglican shrine where there is a replica of the 'holy house of Nazareth'.  The Lourdes hymn was sung and the rosary prayers interjected in between.  The music echoed round the streets and as we entered into the shrine gardens our group joined up with an Anglican group.  Such a poignant moment. 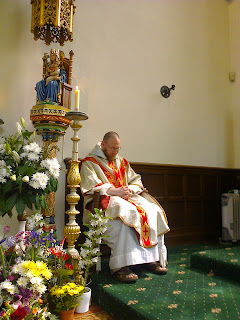 The Anglicans separated and continued into the shrine church.  We then processed round the grounds and out again praying and singing back to the Friday Market where the Catholic church is situated.  Joy and hope filled my heart.  I am sure many more were affected by this unusual event --which will be not so unusual by the end of the summer.

Email ThisBlogThis!Share to TwitterShare to FacebookShare to Pinterest
Labels: Walsingham

Posted by Supertradmum
This overturn of religion did not happen overnight. I visited and stayed in Ireland for quite some time in 2011, 2012, 2013, 2014, and this past January, 2015. An excellent priest told me that the Irish Catholics did not appropriate their adult faith even in the 1950s,refusing to read or study their own religion. My take was that socialism and radical politics, as well as money, were more important than religion. Ireland is not a poor country. Dublin is a rich, international metropolis. Google International is located in Ireland, which has become a tax haven for American companies. The American, Hollywood idea of Ireland has been long gone. I was there when the abortion bill was pushed through the Dail. There was relatively little resistance.
What commentators are forgetting is that Ireland has cooperated more than most countries with the Big Brother of Brussels, giving up sovereignty in many areas, which are hidden to most Americans. Ireland has also pandered to American interests, many businesses, and American liberal groups which push international far left politics.
In addition, in 2012, when I was there, the banks accepted sharia law banking. Look that up, giving preference to loans given to Muslims in exchange for money deals with Saudi Arabia. This is not arcane knowledge, but was touted on the television and radio when I was there.
Also, many of the clergy, specifically the bishops, have given Communion to pro-abort politicians and have not stood up against ssm, and two came out and said vote “yes”. at least two. Again, this sea-change did not happen quickly, but in an atmosphere of growing hatred of the Catholic Church,. Of course, the sex scandals did not help clergy-laity relationships.
Catholic Ireland is officially dead, but it was dying a slow, long death, imho. There has been a disjoint between Catholic practice and politics since Catholic Ireland made a hero out of Charles Parnell, the “uncrowned king of Ireland”, despite his infamous adultery. Even then, Catholics turned against the Catholic Church, which, of course, condemned the man’s actions, and many so-called good Catholics sided with Parnell, making him some sort of martyr. This split between politics and religion is not new in the land of Patrick.
One more thing–neo-paganism, since another “hero”, William Butler Yeats, has made a huge comeback in Ireland, (and many have never left the Isle) in the form of satanism and witchcraft, which are both highly popular. One cannot ignore the fact that the slow fog of compromise grew into the storm we saw on Friday and that this fog was a long time growing in the hearts of many Irish people.