The Seven Mortal Sins of Contraception 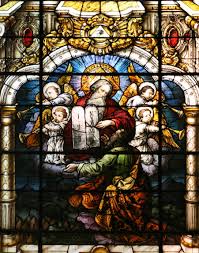 When a person contracepts, he or she commits not one mortal sin, but seven. The use of contraception is forbidden in the Catholic Church for many reasons.

I shall list the Ten Commandments and note which ones are deliberately broken by those who contracept. My comments are in blue.

20 And the Lord spoke all these words:

2 I am the Lord thy God, who brought thee out of the land of Egypt, out of the house of bondage.

3 Thou shalt not have strange gods before me. (1) Idolatry is the first sin of contraception for several reasons. One is playing God and not letting God be God in creating life. One is also making sex and pleasure into gods, thus denying God His sovereignty. One becomes or tries to become God.

4 Thou shalt not make to thyself a graven thing, nor the likeness of any thing that is in heaven above, or in the earth beneath, nor of those things that are in the waters under the earth.

5 Thou shalt not adore them, nor serve them: I am the Lord thy God, mighty, jealous, visiting the iniquity of the fathers upon the children, unto the third and fourth generation of them that hate me:

6 And shewing mercy unto thousands to them that love me, and keep my commandments.

8 Remember that thou keep holy the sabbath day. (3)

9 Six days shalt thou labour, and shalt do all thy works.

11 For in six days the Lord made heaven and earth, and the sea, and all things that are in them, and rested on the seventh day: therefore the Lord blessed the seventh day, and sanctified it.

12 Honour thy father and thy mother, that thou mayest be long lived upon the land which the Lord thy God will give thee. (4) Contraception denies grandparents grandchildren, and breaking the family bond of generations. Thus, one no longer honors the family or one's parents when one contracepts.

13 Thou shalt not kill. Obviously, as all but a few contracepts kill the fertilized egg, now a human being with a soul, contraception is murder. (5)

15 Thou shalt not steal. (7) When one contracepts, one steals not only from the glory of God in creating a new person, but one steals life. One also steals from one's self the dignity of being a human being in co-creating with God in the image and likeness of God, in which we were made.

16 Thou shalt not bear false witness against thy neighbour. (8) Contraception is lying, as one is being deceitful about the real purpose of intercourse, which is procreation. Also, one is lying to one's self about the reality of marriage, and the fact that the marriage act only belongs in a sanctified marriage.

17 Thou shalt not covet thy neighbour's house: neither shalt thou desire his wife, nor his servant, nor his handmaid, nor his ox, nor his ass, nor any thing that is his. Coveting or desiring what is illicit like a person when one is not married, or even desiring someone above God is the sin when contraception is used for the enjoyment of sex without procreation.  (9  and 10). Also, contraception is done because of the desire for things, for choosing things over life--such as houses, status, money, vacations, comfort...etc.). Therefore contraception breaks both th 9 and 10th commandments.

18 And all the people saw the voices and the flames, and the sound of the trumpet, and the mount smoking: and being terrified and struck with fear, they stood afar off...

Thankfully, we have the wonderful sacrament of Confession to release us, to absolve us from such sins, and to give us the grace to start over again in Christ.

Posted by Supertradmum
I cannot ever vote for a BAD Catholic.

Or a BAD Protestant


Well, the list gets longer of unsuitables for office, sadly.

I do not understand why her feast is an optional memorial.

Mothers can pray to her and so can singles, and nuns.

Lord, you chose Saint Jane Frances to serve you both in marriage and in religious life. By her prayers help us to be faithful in our vocation and always to be the light of the world. We ask this through our Lord Jesus Christ, your Son, who lives and reigns with you and the Holy Spirit, one God, for ever and ever. Amen.

Posted by Supertradmum
Yesterday, friends and I traveled up to Galena, Illinois for a day-out road trip.

We came across, quite by God-incidence, a shrine to St. Therese of Lisieux which includes several first-class relics of this great Doctor of the Church, some pieces of bone and hair.

These relics and the shrine have been in the Church of St. Michael in Galena since May 17th of 1927! 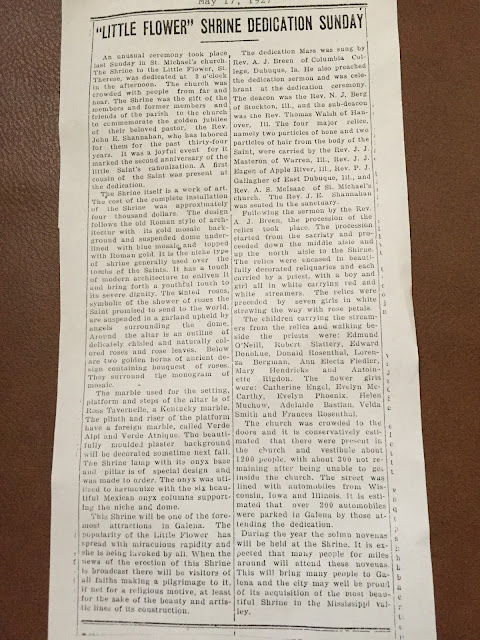 Here is the newspaper article of the report of the opening of the shrine.

Here is one photo of the shrine. 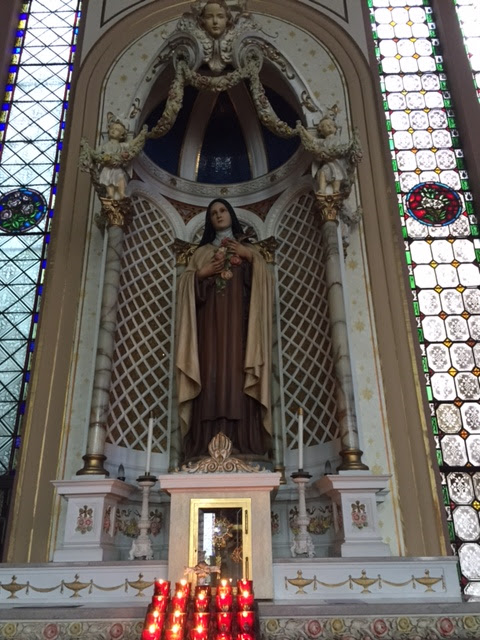 Father Samuel Mazzuchelli, who Fr. Z highlighted on his blog recently, also is connected with the foundations in and around Galena.

Please join me in praying to him for three projects of mine. Thanks so much.

St. Therese, pray for us.

Venerable Samuel Mazzuchelli, pray for us.


Net problems again, so please pray for me.

Posted by Supertradmum
Someone asked me about demons of chaos yesterday. I tried to explain that these were "big" demons, unleashed over families, nations, areas. War, financial depression, severe and unusual natural occurrences involve demons of chaos.

God allows evil to come upon mankind for punishment for serious sins, (abortion, contraception, ssm, national greed and so on), and for the purging of the saintly souls.

Chaos has begun to act, and for those who do not want to be willfully blind, the signs seem clear.

In addition, chaos paves the way for the AntiChrist, Who will bring the false peace, the peace not founded on Christ, but on the false Christ. To desire, as I noted yesterday, peace at all costs, in the face of chaos, will bring the end of the world and the Second Coming. I do not expect these happenings in my generation, but either in that of the Millennials and most likely in that of the Post-Millennials.

Too many people are asleep, caught up with the new season of football, school startings, and so on.

Too many people still focus on trivia, not God.

It is time to prep, now, if you have not already.

Life as we know it is about the change drastically

Etheldredasplace will morph next week. I shall put the new links on this blog for the new blog and the forum. But, between then and today, there may be more changes.

We are supposed to learn, as good students of the spiritual life, lessons from chaos

Some people will die before the real trials, perhaps from the lack of meds, or care, or from being ignored by those who could help them.

Some people will commit suicide, not emotionally, mentally or spiritually ready for times ahead.

Some will survive as the remnant Church.

This is the time for prepping-prep spiritually and physically within the limits of prudence.

But, do not ignore lessons from chaos.

And proper response is necessary. Do not despair, do not become angry.Trust in God.


URGENT – WEATHER MESSAGE
NATIONAL WEATHER SERVICE NEW ORLEANS LA
1011 AM CDT SUN AUG 28 2005
…DEVASTATING DAMAGE EXPECTED…
.HURRICANE KATRINA…A MOST POWERFUL HURRICANE WITH UNPRECEDENTED
STRENGTH…RIVALING THE INTENSITY OF HURRICANE CAMILLE OF 1969.
MOST OF THE AREA WILL BE UNINHABITABLE FOR WEEKS…PERHAPS LONGER. AT
LEAST ONE HALF OF WELL CONSTRUCTED HOMES WILL HAVE ROOF AND WALL
FAILURE. ALL GABLED ROOFS WILL FAIL…LEAVING THOSE HOMES SEVERELY
DAMAGED OR DESTROYED.
THE MAJORITY OF INDUSTRIAL BUILDINGS WILL BECOME NON FUNCTIONAL.
PARTIAL TO COMPLETE WALL AND ROOF FAILURE IS EXPECTED. ALL WOOD
FRAMED LOW RISING APARTMENT BUILDINGS WILL BE DESTROYED. CONCRETE
BLOCK LOW RISE APARTMENTS WILL SUSTAIN MAJOR DAMAGE…INCLUDING SOME
WALL AND ROOF FAILURE.
HIGH RISE OFFICE AND APARTMENT BUILDINGS WILL SWAY DANGEROUSLY…A
FEW TO THE POINT OF TOTAL COLLAPSE. ALL WINDOWS WILL BLOW OUT.
AIRBORNE DEBRIS WILL BE WIDESPREAD…AND MAY INCLUDE HEAVY ITEMS SUCH
AS HOUSEHOLD APPLIANCES AND EVEN LIGHT VEHICLES. SPORT UTILITY
VEHICLES AND LIGHT TRUCKS WILL BE MOVED. THE BLOWN DEBRIS WILL CREATE
ADDITIONAL DESTRUCTION. PERSONS…PETS…AND LIVESTOCK EXPOSED TO THE
WINDS WILL FACE CERTAIN DEATH IF STRUCK.
POWER OUTAGES WILL LAST FOR WEEKS…AS MOST POWER POLES WILL BE DOWN
AND TRANSFORMERS DESTROYED. WATER SHORTAGES WILL MAKE HUMAN SUFFERING
INCREDIBLE BY MODERN STANDARDS.
THE VAST MAJORITY OF NATIVE TREES WILL BE SNAPPED OR UPROOTED. ONLY
THE HEARTIEST WILL REMAIN STANDING…BUT BE TOTALLY DEFOLIATED. FEW
CROPS WILL REMAIN. LIVESTOCK LEFT EXPOSED TO THE WINDS WILL BE
KILLED.
AN INLAND HURRICANE WIND WARNING IS ISSUED WHEN SUSTAINED WINDS NEAR
HURRICANE FORCE…OR FREQUENT GUSTS AT OR ABOVE HURRICANE FORCE…ARE
CERTAIN WITHIN THE NEXT 12 TO 24 HOURS.
ONCE TROPICAL STORM AND HURRICANE FORCE WINDS ONSET…DO NOT VENTURE
OUTSIDE!