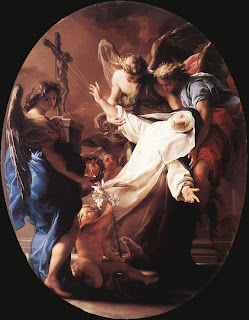 One of the problems with my friends who are into private revelations is that they base 50% or more of their spirituality on such private visions or elocutions. This is dangerous. As in the last post, I quote EWTN on the importance of following public revelation, that is that in the Bible, as that of private revelation. The rules are simple-does the revelation conform to Catholic teaching which already exists, and do the revelations support doctrines and dogmas of the Church. If not, these are false in part, if not in essence.

One must think like a Catholic and not like a Protestant--a theme of this blog. I have several previous posts on this topic, including one here--http://supertradmum-etheldredasplace.blogspot.co.uk/2012/03/on-false-prophets-and-supposed-seers.html

and a connected idea here http://supertradmum-etheldredasplace.blogspot.fr/2012/01/apostolicam-actuositatem-and-dumbing.html


Here is second EWTN note on the subject. 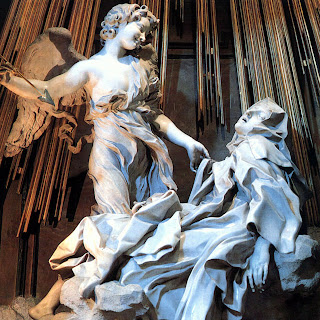 In my travels, I have met many excellent, traditional and NO Catholics who follow private revelations, both present and past, which I do not do. I admit I am of a critical nature and prefer to wait until the Church decides on visions and apparitions before reading or spending time concerning myself with such. There are hundreds of approved visionaries, including the Great Teresa of Avila.

However, as many of my friends have become enamored with private revelations, I have had to learn more from an objective viewpoint, in order to answer their questions, or contradict some of the errors, by gently pointing out the Teaching of the Catholic Church.

I have failed more than I have succeeded and this is because of one attitude. Some people who are into private revelations will not read the CCC and will not listen to rational objections to their favorite seers. I know good Catholics who have become defensive and called me "an enemy" because I have tried to point out such ideas as in the previous three posts here.

And, there is more. I am convinced of two things regarding the following of seers. One, those who do so daily have fallen into an anti-intellectual Catholicism. They want experiential religion only. They want short-cuts to grace.

Secondly, some of these good people do not value obedience to the hierarchy of the Church. For the benefit of many, here are some guidelines from EWTN, with link. Please scroll down and read all this section.


Five causes of error in revelations
(1) Faulty interpretation of visions by the recipient.
St. John of the Cross warns about this in Ascent of Mount Carmel II. 19. Thus St. Joan of Arc in prison had a revelation that she would be delivered by a great victory--it was her martyrdom, which she did not suspect.
Prophecies of punishment, and promises of special favors should be considered as conditional. E.g., the Scapular promise should not be taken to refer to mere physical wearing of the Scapular: it must be, as Pius XII said, the outward sign of consecration to the Immaculate Heart of Mary, that is really lived. If it is used this way then even if the vision of St. Simon Stock might not be true, the promise will be fulfilled, as we explained earlier.
2. Visions of the life and death of Christ, or other historic scenes, must be understood to be approximate only.
Thus some saw Jesus with three nails, some with four. Blessed Veronica of Binasco saw the whole life of Christ, and so did St. Frances of Rome and Catherine Emmerich. The Bollandists, Jesuit experts in studying the lives of the Saints, tell us there are many historical errors in these.
NOTE: Pope John XXIII, ordered The Poem of the Man God put on the index, on Dec. 16, 1960. The Index is now abolished, but Cardinal Ratzinger in a letter of Jan 31, 1985 wrote:..."The Index of forbidden books keeps all of its moral authority and therefore the distribution and recommendation of the work is considered improper when its condemnation was not made lightly but with the most serious motivation of neutralizing the harm which such publication could inflict on the more unwary faithful." So the Pontifical Imprimatur claimed for it is bogus.
3. Human action may mingle with the divine action.
St. Catherine Labouré foretold many events correctly, but failed on others. It is especially easy for this to happen with ideas that appeal to our own desires or fit with preconceived ideas. Benedict XIV (Heroic Virtue III. 14. p. 404) said: "The revelations of some holy women canonized by the Apostolic See whose saying and writings in rapture and derived from rapture are filled with errors."
4. A true revelation may later be altered involuntarily by the recipient.
This happens especially with intellectual locutions which need to be translated into words. Again, God may seem to promise a cure without saying if it is total or partial, sudden or slow, or even physical or moral. Again if a revelation is received in an instant, but it takes long to write it all down. St. Bridget admits such a thing in her own case.
5. Secretaries may alter without intending to do so.
The accuracy of the text is disputed in the works of Mary of Agreda, Catherine Emmerich, and Mary Lataste. It has been shown that 32 passages from the latter have been taken word for word from St. Thomas' Summa Theologiae.
Similarly, compilers sometimes modify them. The first edition of Catherine Emmerich had St. James the Elder present at the death of the Blessed Virgin. When it was seen that this was incompatible with Acts of Apostles, it was dropped from later editions.


Five Causes of False Revelations
1. Pure bad faith, fakery.
Magdalen of the Cross was a Franciscan of Cordova, born in 1487, who entered a convent at age of 17. From the age of 5 the devil appeared to her as various Saints, led her to desire to be considered a saint. At 13 he said who he was, offered an agreement: he would spread her reputation for holiness, and give her at least 30 years of pleasures. She agreed, and it all came true--ecstasies, levitation, prophecies, simulated stigmata. At door of death she confessed. Exorcism was needed.
2. Overactive imagination.
We said above that human faculties may mingle with the divine action. Someone may imagine a saint is near him. He may imagine intellectual locutions. Cf. St. John of Cross, Ascent II. 29. St. Teresa said (Interior Castle 6.6) that if one has once had a real vision, he will recognize the deception.
Hallucinations can come from excess in abstinence, fasting, and vigils.
3. Illusion in thinking one remembers things that never happened.
Some may imagine they have had visions. Some invent stories and convince themselves--in good faith. Some relate trips to far lands where they have never been. The line between imagination and reality is dim in young children--something similar can happen later too. This is not rare. If a spiritual director finds his advice has little effect, there is reason for seeing illusion. Some make false charges in courts in this way.
4. The Devil may give false visions or revelations.
We saw this in the case of Magdalen of the Cross.
5. Predictions by falsifiers.
Some make these at first for their own amusement, then find they have a tiger by the tail. St. Bonaventure (De profectu religiosorum III. 76) said he was fed up with such things, on the troubles of the Church and the end of the world. During the great Western Schism at end of 14th century, there were many holy mortified men who had false revelations, and even thought they would be the pope. At fifth Lateran Council in 1516 Leo X had to publish an order prohibiting preachers from giving public prophecies. There were many during the French Revolution, clear and in detail on the past, vague on the future.
In 19th century there was an epidemic of prophecy especially on "the great Pope and the great King" inspired by the 17th century commentary on the Apocalypse by Ven. Holzhauser. Pius IX in an Allocution of April 9, 1872 said: "I do not give much belief to prophecies, because those especially that have come recently do not deserve to be read." 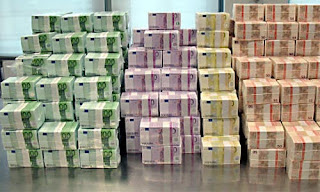 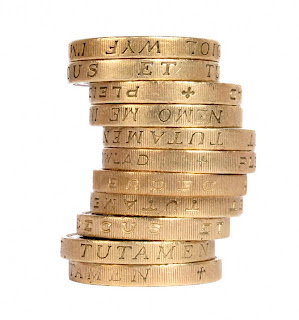