Posted by Supertradmum
Take your time reading....goodnight from Europe.

Posted by Supertradmum
Good thing--he is against giving Communion to those who support abortion.

Prof. Basto said...
I'm having additional toughts. Today is a terible day for Tradition.
My good faith lasted from the announcement of the Protodeacon to this balcony appearence.
I've now seen all that I needed to see. The Holy Father must have actively refused to wear the Papal Mozzetta that Gammarelli had made, and the proper abito corale, instead opting for the abito piano.
He must have refused to enter the balcony with the stole.
Our generation of traditionalists is doomed.
Pope Emeritus Benedict XVI will see in his life the undoing of his work. That is the poisonous result of the abdication.
13 March, 2013 19:43

And if someone can help me verify this, Pope Francis I has ties with Communion and Liberation, a strongly conservative lay ecclesial community.

Posted by Supertradmum
Article from Life-Site News on this Pope's strong pro-life stand.

From the Catholic Herald on the New Pope


7.45pm GMT: The new Pope Francis stood quietly and calmly on the balcony, receiving the cheers of the huge crowd in St Peter’s Square, smiled and said: “Good evening!
He said: :You know that the duty of the conclave was to provide Rome with a bishop. It looks as if my brothers the cardinals went to fetch him from the end of the world!
“I’d like to thank you for your welcome. The people of Rome: thank you! I’d like to pray for Benedict XVI. Let’s pray altogether for him so that the Madonna can look after him.”
Then Pope Francis said the Lord’s Prayer, followed by the Hail Mary. “Glory to the Father, Son and Holy Spirit for ever and ever. Amen. And now let’s start working together, walking together, in the Church of Rome.
“This is the path of brotherhood and trust. Let’s pray for each other because of the great brotherhood of the world. I pray the path will be fruitful for this beautiful city.
“Now I will bless you. But I’d like to ask you a favour, for your prayer to bless me as your bishop. Let’s pray silently, your prayer for me.”
7.40pm GMT: The new pope has focussed on social justice. Has spent his life open to the poor and destitute.
7.35pm GMT: Vatican Radio has a biography of Pope Francis:
The man elected to be the 265th Successor of Saint Peter in the conclave, is Cardinal Jorge Mario Bergoglio, S.J., Archbishop of Buenos Aires, Argentina, Ordinary for Eastern-rite faithful in Argentina who lack an Ordinary of their own rite. He was born on 17 December 1936 in Buenos Aires. He was ordained for the Jesuits on 13 December 1969 during his theological studies at the Theological Faculty of San Miguel.
He was novice master in San Miguel, where he also taught theology. He was Provincial for Argentina (1973-1979) and rector of the Philosophical and Theological Faculty of San Miguel (1980-1986). After completing his doctoral dissertation in Germany, he served as a confessor and spiritual director in Córdoba.
On 20 May 1992 he was appointed titular Bishop of Auca and Auxiliary of Buenos Aires, receiving episcopal consecration on 27 June. On 3 June 1997 was appointed Coadjutor Archbishop of Buenos Aires and succeeded Cardinal Antonio Quarracino on 28 February 1998. He is also Ordinary for Eastern-rite faithful in Argentina who lack an Ordinary of their own rite.
7.33pm GMT: Not among the favourites, Cardinal Bergoglio is known for his humility and simple living, using public transport and washing the feet of Aids victims.
7.31pm GMT: New pope begins by asking for prayers for the Pope Emeritus.
7.22pm GMT: Pope Francis greets the crowd in St Peter’s.
7.21pm GMT: Pope Francis is the first non-European pope for 1,000 years.
7.12pm GMT: Cardinal Jorge Bergoglio is Pope Francis I, the first Jesuit to be pope.
7.10pm GMT: Cardinal Tauran’s first words will be: “Annuntio vobis gaudium magnum: Habemus Papam; Eminentissimum ac reverendissimum Dominum, Dominum [first name of new pope, in Latin] Sanctæ Romanæ Ecclesiæ Cardinalem [his last name], Qui sibi nomen imposuit [his papal name].”
7.04pm GMT: CNS report a crowd of 100,000 in St Peter’s Square.

Wiki--someone is on top of things

The format for the announcement when a cardinal is elected Pope is:

In English, it reads:

I announce to you a great joy:
We have a Pope!
The most eminent and most reverend Lord Jorge
Lord Bergoglio Cardinal of the Holy Roman Church

back in a moment

and yes, it was two ballots 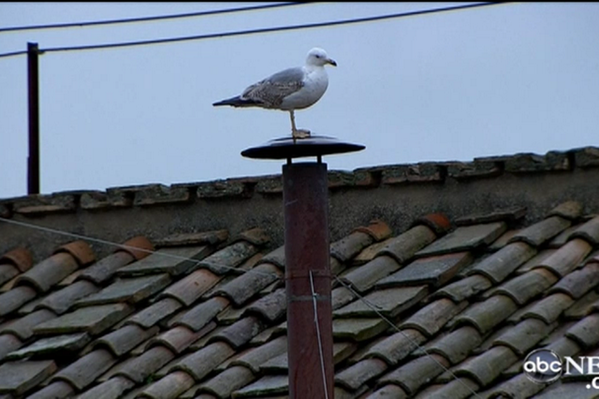 The chimney must be the warmest place in the area! More than one and taking terns...........pun..the second one left and now there is another one...these are stress-busting birds.

Posted by Supertradmum
Love it, the media is NOT in control.

And, black umbrellas with white rims are trendy.

Very large seagull on the chimney.

And, here in Surrey

Posted by Supertradmum
we have snow--more snow!

This is NOT America

Posted by Supertradmum
Something has arisen which needs immediate attention in my little old life.

Please pray for a miracle.

And if no white smoke by one tomorrow, Rome time, same press conference.

The chemicals in the smoke are being discussed and may be listed on La Stampa later today.What a great experience to see the secular interest in the Church. I am SO proud to be a Catholic.

How wonderful that television, the Net, radio and twitter are talking about SMOKE. Love it.

Archbishop George Ganswein has shared that the Pope Emeritus is well and is watching things on television. How amazing!

Just got a view of the ballot.

This press meeting is amazing!

Rosica: I lost sleep night before. I had chills up my spine. Looked at cardinals "saw not just them, but their countries"

Of course, Potus has to make news concerning a pope

A note on the DoC series

Posted by Supertradmum
Tomorrow, I shall resume the Doctors of the Church series...In my monastic journal, March 12th was the Feast of St. Gregory the Great, who I just covered, and March 18th is St. Cyril of Jerusalem. I ask their intercession for Cardinal Burke. And, for my adopted Cardinal Alencherry, to hear God's voice.

And, here is an interesting chart for those who want to speculate, from a German blog, in English.

Gerard O'Connell @gerryorome
Cardinals now celebrating mass. They will start voting in second ballot around 9.45 -10.00a.m. Should have counted votes by 10.45 a.m.

Black smoke at 10:38 and that was two ballots

A half hour until smoke

Posted by Supertradmum
Umbrellas up in the Piazza. 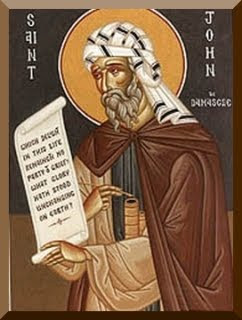 
An Exact Exposition of the Orthodox Faith.
————————————
Book I.
Chapter I.—That the Deity is incomprehensible, and that we ought not to pry into and meddle with the things which have not been delivered to us by the holy Prophets, and Apostles, and Evangelists.
No one hath seen God at any time; the Only-begotten Son, which is in the bosom of the Father, He hath declared Him1406. The Deity, therefore, is ineffable and incomprehensible. For no one knoweth the Father, save the Son, nor the Son, save the Father1407. And the Holy Spirit, too, so knows the things of God as the spirit of the man knows the things that are in him1408. Moreover, after the first and blessed nature no one, not of men only, but even of supramundane powers, and the Cherubim, I say, and Seraphim themselves, has ever known God, save he to whom He revealed Himself.
God, however, did not leave us in absolute ignorance. For the knowledge of God’s existence has been implanted by Him in all by nature. This creation, too, and its maintenance, and its government, proclaim the majesty of the Divine nature1409.

Email ThisBlogThis!Share to TwitterShare to FacebookShare to Pinterest
Labels: doctors of the Church, perfection, perfection again, saints and martyrs

Only in England and Ireland.

A wonderful and real thought

HelpofChristians ‏@MaryOurHelp
"Each time we look at The Most Blessed Sacrament our place in heaven is raised forever." ~(Revealed by Our Lord to St. Gertrude the Great)