More on the persecution watch regarding the US Army

On The Lectio Divina

I went to a prayer and study day on the Lectio Divina, not because I needed to learn about this practice, but in order to meet some old friends. The two priests involved in the day were fantastic, and, as I was the only one taking notes, one of the organizers asked me to share some of the ideas of the day.

The priest who presented the material from the Book of Ruth was Father Stefan Attard, who teaches at the University here in Malta.

I shall not share all the details of the talks, but will highlight some of the important parts of Fr. Attard's unpacking of Ruth, and also his prayer meditation.

First, when one is approaching using Scripture in the Lectio Divina, as many of you know, the Catholic does not use any interpretations of Scripture, but those instructed by the Church. The first step is to understand the text from a historical and linguistic point of view, as well as how the particular book fits into the Canon of the Bible, as decided by Holy Mother Church.

Fr. Attard reminded us that Ruth, a story taking place in the time of the Judges, actually was written much later, as late as 450 BC.

As this short book is known to most Catholics, let me move on to a few points made by Father Attard for our consideration. The significance of marriage would be one of these seminal points. The book begins with marriages and ends with a marriage. The theme of marriage is important, as the love of God is shown through marriage, but also the love of God for His People, the Hebrews, is shown through the excellence of the person of Ruth herself.

Father emphasized Ruth's superior holiness by underlining the passage in the last chapter, Chapter Four, when the comparison of Ruth to Leah, Rachel and Tamar was made. The significance of the comparison is my second point from this talk. Ruth's holiness is seen in her fidelity, selflessness and purity.

Ruth is compared to the great wives of Israel, the mothers of the Twelve Tribes. These women are keys to the entire nation of Israel and to the genealogy of King David, and Christ Himself. But, Father pointed out that Ruth, as a Gentile, is being held up as equal and even superior in her love for Naomi and for Boaz, as she followed a poor mother-in-law into the Promised Land without any promises, with only a future of poverty. Ruth's faith in God was greater than most.

Also, Ruth is compared as being superior to Tamar, who had to trick Judah into fulfilling the levirate law of descendants. Ruth did not trick Boaz, but remained pure and trusting in God for the fulfillment of her destiny and the carrying on the the family name.

Ruth is shown as having complete trust in God, and as a Gentile, this is important for all of us who come from Gentile stock.

Another point made by Father Attard was that Ruth was a foreigner, and that the people of God should always be open to foreigners. As one of two foreigners in an audience of about sixty ladies, I found this emphasis interesting. That the people of God, of the promise, have a Moabitess as one of them shows the inclusiveness of God in His plan for salvation.

Father noted that at the time of the writing of the book, there had been a reaction by the Prophet Ezra and Nehemiah regarding the number of Hebrew men who were marrying Moabite women. (Perhaps they were better looking--or more virtuous.) That the author of the book repeats that Ruth was a Moabitess at least seven times, indicates that he wanted to show that even Gentiles could be holy spouses.

This background of the book led to the second talk which was a small prayer service, skipping the second stage of Lectio Divina, which is personal meditation, a la St. Ignatius, involving the active imagination, to the third stage, which is prayer. Father led the group through a series of prayers based on the book, including a prayer for openness to foreigners, to trusting totally in God, and the fact that God wants us to pursue holiness here and now.

It should be noted that Lectio Divina takes time and practice, even years, before one enters into Active Reflection, which I have noted on this blog in the perfection series.

On other women from the Bible...

The Breaking of the Storm 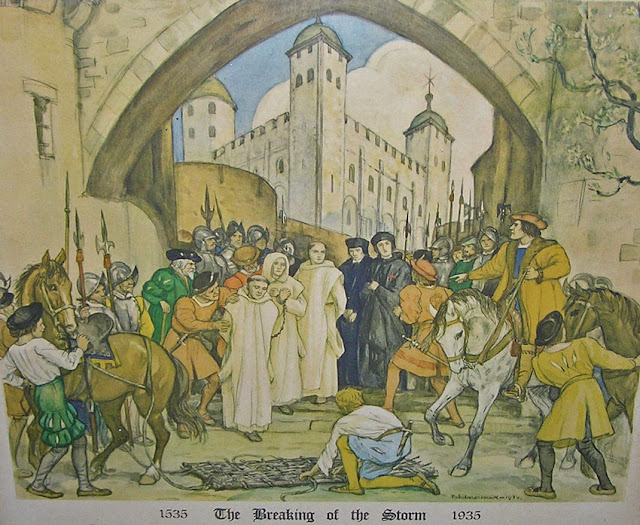 ...is the name of this painting of the great first martyrs in England in 1535, the great Carthusians of London. I have written about them before. See links below.

Today is the Feast of the 40 Martyrs of England and Wales, a feast which includes the above and SS. Edmund Campion, Cuthbert Mayne, Margaret Ward and others.

I think it is a good time to teach the lives of these saints to your children. Name your new babies after them. Seek their patronage for your families.

My own son is named after two of the greatest martyrs of England. I could senses the signs of the times over 25 years ago.

The Breaking of the Storm will happen in my lifetime and yours.......

Here are some other posts on this subject.

correction from Catholic Online thanks to a reader

In England, these martyrs were formerly commemorated within the Catholic Church by a feast day on 25 October, which is also the feast of Saints Crispin and Crispinian, but they are now celebrated together with all the 284 canonized or beatified martyrs of the English Reformation on 4 May.

In Wales, the Catholic Church keeps 25 October as the feast of the 'Six Welsh Martyrs and their companions'. The Welsh Martyrs are the priests Philip Evans and John Lloyd, John Jones, David Lewis,John Roberts, and the teacher Richard Gwyn. The 'companions' are the 34 English Martyrs listed above. Wales continues to keep 4 May as a separate feast for the beatified martyrs of England and Wales.

Email ThisBlogThis!Share to TwitterShare to FacebookShare to Pinterest
Labels: persecution 2, saints and martyrs 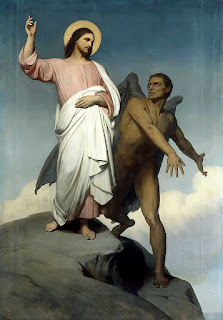