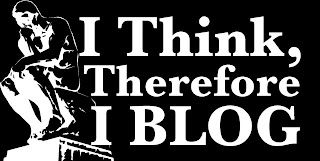 If you don't look at Maru listed on my blog list.... 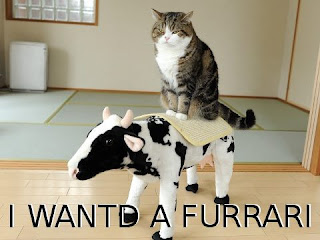 My son added the caption. 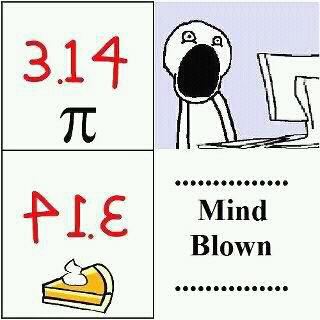 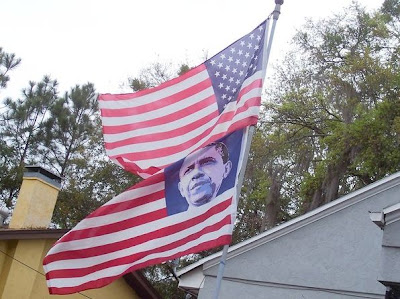 Take a look at this....the States are in trouble if the Narcissist can get away with this and has his party's support. Ugh!

More Persecution of Christians to Come in Northern Ireland, England, Scotland and Wales

I know I have several posts today, but I need to refer to the new movement in England to ban the wearing of crosses or crucifixes in the workplace. Here is the news item. Although Muslims, Sikhs and other persons can wear their symbols, the cross seems to bother some Conservatives in the government. This is out and out persecution of Christians. Thankfully, some Anglicans, including the former Archbishop of Canterbury, Dr. Carey, have come out against this. Carey said ministers and courts were "dictating" to believers, calling it another example of Christianity being marginalized in the public square."The reasoning is based on a wholly inappropriate judgment of matters of theology and worship about which they can claim no expertise," he charged. "The irony is that when governments and courts dictate to Christians that the cross is a matter of insignificance, it becomes an even more important symbol and expression of our faith," he added.

The Pope and the Irish Eucharistic Congress 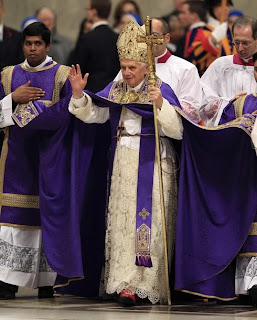 Today, on the news in Ireland, it was announced that the Pope, Benedict XVI, will broadcast on live television, some type of homily or commentary at the last Mass of the Eucharistic Congress. He will not be in Ireland, contrary to rumors here. 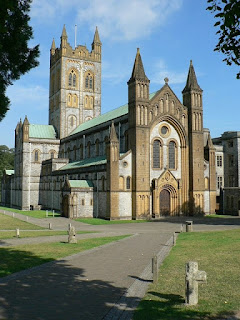 This is a dangerous posting. So many people have fallen into hedonism and selfishness that to write about not being vigilant and strict with one's self all the time may seem inappropriate. However, I want to caution some of my traditional friends on being too harsh with themselves. Perhaps my perspective is so Benedictine, a way which always considers the weak, that I write this cautionary tale from St. Anthony Abbot:   A desert hunter saw Anthony Abbot “horsing around” with his fellow monks. The hunter expressed shock, even scandal, when he saw the monks enjoying themselves at some recreation. Anthony Abbot told the hunter to string his bow and shoot at a near target. The hunter did so. Then, the Abbot told the hunter to shoot another arrow. The hunter did so. When the Abbot asked the hunter to shoot a third, the hunter replied, “If I bend my bow so much at a time, it will break.” Anthony Abbot replied. “So it is with my monks. If I do not give them rest and recreation, they will break.”
The point of this story is relatively clear. But I think the larger question has to do with the works of piety and prayer. Christ warns us not to pile on repetitious prayers one after another. He decidedly does tell us to pray and fast. Fasting is ignored for the most part today. And, so much fasting is what I call “token fasting”, such as giving up luxuries, such as chocolate or going out to dinner. Such is the wealth of the States, that fasting resembles ordinary life for the rest of the world.
However, there is a stage wherein the great words of St. Benedict apply to all. When he writes of the balance of work, study and prayer, he indicates that all three activities are important in a day for a person pursuing holiness. An entire day of prayer is not natural for us lowly humans. The necessity of work and the need for study, such as the reading of Scripture daily, create a rhythm of activity, all focused on Christ. To omit one is folly and shows a lack of appreciation for the needs of the human, who is body and spirit. Above all rules, that of St. Benedict reveals an understanding of what it means to be an organized, healthy human being.
That Anthony Abbot recognized the needs of his community shows the Holy Spirit working within the Church in all ages. 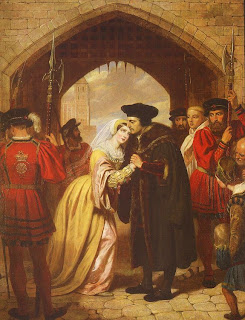 To balance this approach, one must be more harsh with one's self than most people in the world. We cannot slack off in the pursuit of salvation, that is, in cooperating with grace. However, we are clay, and God has given us guidelines for the good of our bodies and our souls.
St. Thomas More wore a hair-shirt and he said when in prison that he wished he had been harder on himself in order to prepare for his martyrdom. His example were the Carthusians being stretched on hurdles and taken to Tyburn, singing in the mud and grime. If one is called to such serious penances, one must have a spiritual director. But, for the lay person, the joyous accepting of daily sufferings without complaining may be enough penance. May we all realize that complaining is a sin and if we refrain, we change our entire outlook on life to one of gratitude and joy.

On the Laity Using the Breviary 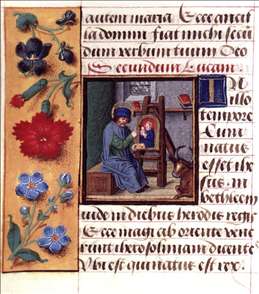 Several months ago, Father Z on his famous and excellent blog, ran a poll on how many and what type of the Liturgy of the Hours were said by his readers. I was pleasantly surprised not only at the number of lay people who prayed the Breviary, but how many hours some actually covered in a day.
Now, I must admit, I rarely do more than either Lauds or Vespers, choosing one or the other depending on my schedule. Rarely do I do Sext, Prime and Terce, which are in my Monastic Diurnal, which is from St. Michael's in Farnborough. Now that the Baronius Press has published a three volume set of the Breviary in the Extraordinary Form, I shall be interested in looking at that in detail, although I am partial to my Benedictine Breviary.
What seemed a great blessing and encouragement to me were the numbers of the laity who said two or more of the hours per day. I find that a refreshing obedience to the call of several Popes in the past asking the laity to take part in the Daily Office. What does this trend mean?
I think, ironically, it means two habits among the laity which are distinct. The first is that there are more single lay people, who take time to say the Liturgy of the Hours alone, or possibly, in a group. That younger people have picked up the Daily Office and are using it for prayer exhibits a sign of renewal among the younger adults.
The second trend is that more married couples are praying the Divine Office, or parts of it, together. I am reminded of a humorous story told by an old Irish friend of mine, Paddy. He is in his eighties, and was telling me that his brother in his late sixties was getting married for a third time, being a widower twice. When his brother, Mike, went to the local priest, the priest asked him why he wanted to get married again, seeing that Mike and his wife-to-be were beyond child-bearing age. Mike did not miss a beat and answered, “I want someone to answer the rosary I start up every night.” Mike's point was that for him, praying was easier with someone than without. Several of my married friends pray with their husbands, especially now that some are retired. They find this so rewarding, that they admit they wished they had done this their entire married life instead of waiting until the children were raised and gone. 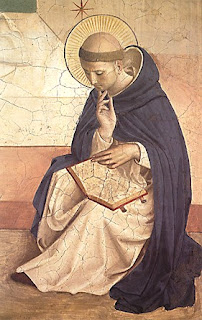 Here is a lovely painting of St. Dominic reading the Breviary. There is something to be said about praying out loud with others. The interaction between the body and the soul is important to us mortals. Community prayer also keeps us from too much introspection and selfish concerns. However, there are thousands of clergy and lay people who say the Divine Office daily alone.
Those of us single ones may find praying alone easy as we have been doing it for such a long time, but the point of using the Breviary as laity should be considered by all. May I quote St. Benedict, on the Opus Dei, whose Rule I have been revisiting here for a week or so. Please note that eleven of the chapters in the Rule are dedicated to praying, and for the Benedictine, this means praying the Divine Office. Indeed, nothing is to be preferred to the work of God.

Can Ireland become the Isle of Saints Again? Oliver Plunkett and Margaret Ball 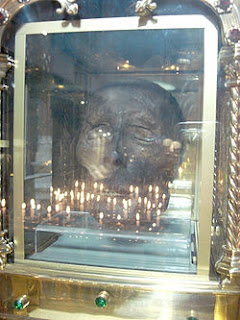 I have had the joy and privilege of seeing the preserved head of St. Oliver Plunkett in Drogheda. Now, I have a personal tie to him, as part of him is at Downside Abbey, which is connected to my academic training. Also, I have met and spoken with the postulator of St. Oliver Plunkett, and the seventeen martyrs of Ireland, Msgr.  John Hanley, former rector of the Irish College in Rome and a great scholar as well as a gentleman. Msgr. Hanley's knowledge of St. Oliver Plunkett makes him the world expert on this saint and possibly all the seventeen saints of Ireland. He talked with me several times and gave a fantastic presentation in the local church on St. Oliver.


I would like to highlight one of the saints, St. Margaret Ball. Here is a link on these martyrs for your perusal. St. Margaret was betrayed by her son and husband, a cruel event, marking her as a martyr before her death in prison.


Born Margaret Bermingham about 1515 in Skreen, Co Meath, she married Bartholomew Ball, a prosperous merchant in Dublin. Her eldest son, Walter, however, became a Protestant and an opponent of the Catholic faith. Margaret provided 'safe houses' for bishops and priests passing through Dublin and would invite Walter to dine with them, hoping for his re-conversion.

Walter was elected Mayor of Dublin. He had his mother arrested and drawn through the streets on a wooden hurdle, as she could no longer walk, to Dublin Castle. Here she remained imprisoned for the rest of her life. If she had renounced her faith she could have returned home, but she refused and died in prison aged 70 in 1584. The chapel-of-ease at Santry in Larkhill parish was named in her honour. 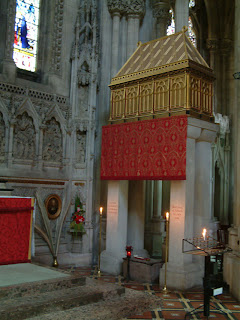 Thanks to wiki for the two photos of the Drogheda shrine. Above is the shrine at Downside.