As we enter Passion Week with this First Sunday of the Passion in the Tridentine Liturgy, let us turn our hearts and mind to Mary, the Theotokos.  Mary, Mother of the Church, pray for us.

A Reluctant Sinner has a great blog and video

Posted by Supertradmum
For my dad....http://areluctantsinner.blogspot.co.uk/2013/03/footage-of-pius-xii-speaking-in-english.html

Read this, weep, and pray

St. Patrick and the Hill of Tara

Posted by Supertradmum
I have driven past this several times, but have not gone up the Hill of Tara.

St. Patrick did the unbelievable and lit a fire on Easter, causing the Druids and the King to realize that another God had entered Ireland. Fires were forbidden on that sacred hill, so St. Patrick did something very symbolic.

We need symbols, as we are body and blood, flesh and spirit. Patrick's fire spread all over Ireland as Christianity grew.

We need more Patricks, and more great symbolic actions, as well as real confrontation with evil.

Email ThisBlogThis!Share to TwitterShare to FacebookShare to Pinterest
Labels: Ireland, saints and martyrs

Posted by Supertradmum
This is from a New York Times article: there is more here.

A husband must have “guardianship” over his wife, not an equal “partnership” with her, the group declared. Daughters should not have the same inheritance rights as sons. Nor should the law cancel “the need for a husband’s consent in matters like travel, work or use of contraception” — a reform in traditional Islamic family law that was enacted under former President Hosni Mubarak and credited to his wife, Suzanne...
Some Egyptian feminists, though, called the statement a vindication of their warnings that the Brotherhood might lead Egypt in a more conservative and patriarchal direction...
“They do not believe that when domestic violence is present, the women should resort to the justice system or the legal process,” said Ghada Shahbandar of the Egyptian Organization for Human Rights. “It should be kept at home and under the protection of the family — that is their claim. And there is no such thing as marital rape because a husband is entitled to have sex with his wife any time that he wants.”

Watch, guide and protect our Pope and our Church. May the Perfect Will of your Son be accomplished.

Slowing down for a day and a link

Internet problems are not causing a problem, but real life as we know it is causing me to slow down the blogging today. Backsoon.

Pray for our brothers and sisters in Christ. And, read this: http://www.jihadwatch.org/2013/03/sudan-systematically-targeting-nubian-christians.html

Posted by Supertradmum
The way to perfection is the road of love. 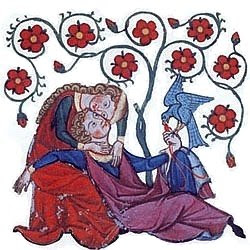 I believe nothing can happen that will outweigh the supreme advantage of knowing Christ Jesus my Lord. For him I have accepted the loss of everything, and I look on everything as so much rubbish if only I can have Christ and be given a place in him. I am no longer trying for perfection by my own efforts, the perfection that comes from the Law, but I want only the perfection that comes through faith in Christ, and is from God and based on faith. All I want is to know Christ and the power of his resurrection and to share his sufferings by reproducing the pattern of his death. That is the way I can hope to take my place in the resurrection of the dead. Not that I have become perfect yet: I have not yet won, but I am still running, trying to capture the prize for which Christ Jesus captured me. I can assure you my brothers, I am far from thinking that I have already won. All I can say is that I forget the past and I strain ahead for what is still to come; I am racing for the finish, for the prize to which God calls us upwards to receive in Christ Jesus. Philippians 3:8-14

On the Diocese of Ely


This is all from the Catholic Encyclopedia online and just for fun.

As you know, St. Etheldreda is the patroness of this blog.

ANCIENT DIOCESE OF ELY (ELIENSIS; ELIA OR ELYS).
Ancient diocese in England. The earliest historical notice of Ely is given by Venerable Bede who writes (Hist. Eccl., IV, xix): "Ely is in the province of the East Angles, a country of about six hundred families, in the nature of an island, enclosed either with marshes or waters, and therefore it has its name from the great abundance of eels which are taken in those marshes." This district was assigned in 649 to Etheldreda, or Audrey, daughter of Anna, King of the East Angles, as a dowry in her marriage with Tonbert of the South Girvii. After her second marriage to Egfrid, King of Northumbria, she became a nun, and in 673 returned toEly and founded a monastery on the site of the present cathedral. As endowment she gave it her entire principality of the isle, from which subsequent Bishops of Ely derived their temporal power. St. Etheldreda died in 679, and her shrine became a place of pilgrimage. In 870 the monastery was destroyed by the Danes, having already given to the Church four sainted abbesses, Sts. Etheldreda, Sexburga, Ermenilda, and Werburga. Probably under their rule there was a community of monks as well as a convent of nuns, but when in 970 the monastery was restored by King Edgar and Bishop Ethelwold it was a foundation for monks only. For more than a century the monastery flourished, till about the year 1105 Abbot Richard suggested the creation of the See of Ely, to relieve the enormous Diocese of Lincoln. The pope's brief erecting the new bishopric was issued 21 Nov., 1108, and in Oct., 1109, the king granted his charter, the first bishop being Harvey, former Bishop of Bangor. The monastery church thus became one of the "conventual" cathedrals. Of this building the transepts and two bays of the nave already existed, and in 1170 the nave as it stands today (a complete and perfect specimen of late Norman work) was finished. As the bishops succeeded to the principality of St. Etheldreda they enjoyed palatine power and great resources. Much of their wealth they spent on their cathedral, with the result that Ely can show beautiful examples of gothic architecture of every period, including two unique features, the unrivaled Galilee porch (1198-1215) and the central octagon (1322-1328) which rises from the whole breadth of the building and towers up until its roof forms the only Gothic dome in existence. The western tower (215 feet) was built between 1174 and 1197, and the octagon was added to it in 1400. Of the cathedral as a whole it is true that "a more vast, magnificent and beautiful display of ecclesiastical architecture and especially of the different periods of the pointed style can scarcely be conceived" (Winkles, English Cathedrals, II, 46). It is fortunate in having perfect specimens of each of the successive styles of Gothic architecture: the Early English Galilee porch, the Decorated lady-chapel (1321-1349), and the Perpendicular chantry of Bishop Alcock (c. 1500)


The original Catholic diocese was much smaller than the present Anglican see and consisted of Cambridgeshire alone, while even of this county a small part belonged to Norwich diocese. The bishops of Ely usually held high office in the State and the roll includes many names of famous statesmen, including eight lord chancellors and six lord treasurers. Two bishops — John de Fontibus and Hugh Belsham — were reputed as saints, but never received formal cultus; the former was commemorated on 19 June. The following is the list of bishops:--

Bishop Goodrich showed reforming tendencies and during his pontificate the monastery with all its dependencies was suppressed. The last Catholic bishop was Thomas Thirlby, who was one of the eleven confessor-bishops imprisoned by Elizabeth and who died at Lambeth in 1570. In the diocese there were one archdeaconry and 141 parishes. The arms of the see were: gules, three ducal crowns, or.

Gules three Ducal Coronets two and one Or. from this site...
Bishop William de Luda is found using these arms as early as 1290. They are those assigned to S. Etheldreda, Queen of Northumbria and founder of the Abbey of Ely, in whose honour the cathedral church is dedicated. The reverse, Or three Ducal Coronets two and one Gules, are the arms of St. Osyth, Queen of the East Saxons and founder of a nunnery at Chick in Essex, who was murdered by the Danes about the year 676.


I pray that St. Patrick may return and expel all the snakes from Ireland-the snakes of greed, contraception, abortion, apostasy.