Where Is The English Catholic Press?

Posted by Supertradmum
N.I.C.E. in Great Britain, which determines medications and hospital procedures in the National Health, has stated that holding back water from patients does not hasten death. What a lie!

National Institute of Clinical Excellence, or N.I.C.E. basically approves back-door euthanasia, which is open in some places in Great Britain anyway.

I know of one person who was euthanized way back in 1994, over the objections of myself and some people who were against this procedure.


In 2013, the Catholic Herald wrote about on aspect of this problem. Here is one example.

Why the silence now? I can find no article against this which is creative and authoritative, that is, from the Church.

Why? Why no comment from the Cardinal in London, or any of the bishops?

If any English readers have read anything, please let me know.

I, for sure, cannot find anything. A "conspiracy of silence"?

Posted by Supertradmum
For those who have read Lord of the World, and I am finishing up my fifth reading at least, the title reveals a problem of today's West--that of the confusion of religion with politics, a theme I have followed on this blog for a long time.

The first is the True Lord of the World, Our Lord Jesus Christ, Saviour, King, Ruler of all.

The second person to which the title refers is the Pope, who is the vicar of Christ on earth and the leader of the institution of the Church, as well as the spiritual head. The main character becomes the pope.

The third is the mock Lord of the World, the AntiChrist, who will attempt to take sovereignty from God and His Pope, in the End Times. In the story, of course, he faces the pope head on. We know who wins, as Christ comes to claim His earth, His people.

I can see from my seat a Catbird, which is calling out. This young bird sounds like a cat, but can mimic the songs and calls of other birds. It imitates a Robin, a Cardinal, a Starling, but remains a Catbird. 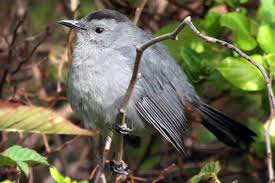 The sounds made by the Catbird vary, from songs, to calls, to clicking noises. No matter what sounds the Grey Catbird makes, this creature still remains itself.

So, too, the AntiChrist will come and mock Christ. He will perform miracles in the name of humanity, not God, and will draw men down into deceit and, finally, hell.

The only Lord of the World is Christ, and His representative on earth, the Pope.

Sadly, too many people look to politicians for salvation. Only Christ saves us from ourselves; the world, the flesh and the devil.

The little Catbird has flown away and now a Mourning Dove, on of my favorites, is singing over the loud hum of the cicadas. Summer will end soon, and the birds will fly south, except for the few which winter over in this harsh climate.

Few safe havens will remain in the time of tribulation, which is barely just beginning, but beginning. Our children and chidrens' children will see the worst persecution. I sincerely hope, Dear Readers, you are teaching your children to be saints.

Tough mindedness and discernment need to be priorities in their lives, as in ours.

I am having trouble with the Internet today, so I may not be able to blog much.

No, I did not forget about St. Dominic

Posted by Supertradmum
Just follow the tags for previous articles...