Why can't this happen in England? And Vigil on Friday in Maidstone including Father Tim Finigan

Posted by Supertradmum
From LifeSiteNews, this photo and article: my question is why can't this happen in England as well, where the pro-life movement is particularly anemic? There is a vigil this Friday in Maidstone, marking the 44th anniversary of the abortion act in GB.

PROCESSIONAL PRAYER VIGIL  LED BY THE FRANCISCAN FRIARS OF THE RENEWAL
The vigil at Marie Stopes abortion facility, Brewer Street, Maidstone, Kent ME14 1RV,
will be held on FRIDAY 27 APRIL 2012
FROM ST. FRANCIS CHURCH, WEEK STREET,  MAIDSTONE, KENT
LED BY FATHER TIMOTHY FINIGAN
TIMES ARE AS FOLLOWS:
12.30pm HOLY SACRIFICE OF THE MASS AT ST FRANCIS’ CHURCH
01.00pm PRAYERFUL AND PEACEFUL PROCESSION WITH AN IMAGE OF OUR LADY OF
GUADALUPE TO MARIE STOPES ABORTION CENTRE. HOLY ROSARY, PRAYERS AND
HYMNS
02.30pm RETURN PROCESSION FOR BLESSING AND REFRESHMENTS IN THE PARISH CENTRE
Directions:  By Train: Connex South East runs a direct line from Victoria to Maidstone East Station, which is directly opposite St. Francis Church.
By Road:  The M20 – come off at Junction 6.  Follow signs to Town Centre then to Maidstone East Station.  There is a car park at the station and also 2 car parks in Brewer Street and 1 in Wheeler Street, both of which are accessed by Lower Boxley Well Road.

The Purity of God

Posted by Supertradmum
I hear so many people today say that they do not believe in Hell, because "a good God would not send anyone to such a place." Love without Justice is sentiment, not Love. I try to explain to such ladies and gentlemen that God is so Perfect, that one small indiscretion on our part is an affront to Purity Himself.

God is Just, not as a human judge, but because He is All-Good and All-Loving. In the Face of Perfect Love, one sees one's limitations, failings imperfections, sins.

Last year, I know a person who had such an experience of the Purity of God. In one purgatorial moment, in December of 2011, he experienced being in the Presence of Pure Goodness, Pure Innocence, and how the smallest transgression was like the worst sin in the proximity of God. This he experienced, and wept for his sin, for failing God. This was very much like the particular judgement, except that he did not die, and that he knew that if he said yes to suffering, he was saying yes to life, to love. And, yet, experiencing Love, Who is God, had been through an other, his beloved friend, whom he wanted to marry, whom he had hurt rather inadvertently, which caused this moment of grace. This person said that his small imperfection, which many would think is not even a sin, caused him such grief in the Face of the Living Purity Who is God, that he sobbed for two and one-half hours. He felt two things and he knew two things: that God is all Just and that God is all Love. And, that if God did move the heart of his loved one to love him, it would be grace and not anything he deserved. He was, metaphorically, stripped naked in the Sight of God. All of his life and history was in the Will of God. He also understood that his one small imperfection merited hell, not merely purgatory, and that the Passion of Christ had taken away his own punishment. I do not know the end of the story. But, I am sure the man was changed forever. He does not mind that I share this with you. He thought, perhaps, that his moment of a glimpse of the particular judgement would help others understand the magnitude of the Love and Purity of God.

This story, which is true, is amazing. That a man could see his imperfection, and in Love, in the Presence of God, still know that he could have been damned showed me that God's Justice is actually God's Love. Any other understanding is pure sentimentality and far from the teaching of the Church.

Mary the Second Eve and Perfection 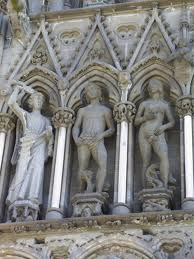 I am still working on my series on perfection and have been thinking about one of the dangers of the theory of evolution, which, as all thinking people know, is a theory.

In Catholic doctrine, we must believe that we have descended from one man and one woman. We conveniently and because of tradition, call these first two parents Adam and Eve. We cannot believe in group creation, which is a clear departure from the idea that all humans come from one set of special male and female parents.

We also believe that these parents were perfect, in the sense that they had no concept of sin or evil. That had what the Church describes as "preternatural gifts", including health and immortality, the lack of decay and disease, a will and emotional life which were not inclined to sin (integrity), a clear and keen intellect including infused knowledge, and communion with God in His grace. God created man and woman in His own Image and Likeness, which would reflect the Beauty of God. Man and woman are, as we are reminded in the CCC, "the summit of the Creator's work". Man is the only creature who is "able to know and love his creator". In the same section in the CCC, we read that " He is capable of self-knowledge, of self-possession and of freely giving himself and entering into communion with other persons." The CCC insists on the common origin of the human race. Many references in the CCC should be studied, including Humani generis, which I have quoted before on this blog.

There was a happiness and a holiness which belonged to our first parents which was lost by sin.

The trouble with evolution, which we are allowed to believe in as Catholics, as long as we believe in only two parents of the entire human race, and the creation of the soul and body by God, is that it denies the original perfection of the human race and believes in the false, and heretical idea of progressiveness, which means that people are getting more and more holy and perfect through-out history. This is a modernist heresy condemned by the Church, and those documents may be seen on the side of this blog.

The common ideas of early humans indicates that they seem less than perfect, and atheistic interpretations of creation want those images to be burned into our memories. If Adam and Eve were created in a perfect state of humanity, albeit, a state which would indicate the seriousness of Original Sin; that is, that they should have "known better",  just as Lucifer should have foreseen his fallen state, then the common ideas of man and woman as ugly and even deformed according our ideas of beauty.

As the CCC quotes, from Romans, death enter into the world through the sin of Adam and Eve.
This sin brought disease, decay, the clouding of the intellect, concupiscence, the weakening of the will. These were NOT present in the first parents. So, one can see the problem with the views of evolution which deny an original perfection. 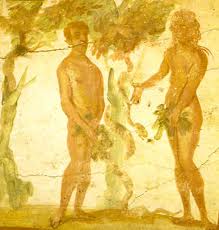 In other words, we are less perfect, without grace and purification, than our first parents. It is only in Jesus Christ and through the sacramental life of the Church that we regain states of holiness and perfection. Baptism takes away Original Sin and makes us Children Of God. The Gifts of the Spirit, given in Confirmation, restore us to a state of progress in the Holy Spirit, which does not happen otherwise. Conforming to the Mind of Christ is conformity to the teachings of the Church and the spiritual journey to perfection, without which, no one sees God.

If man and woman are seen as not being perfect, that leads to a denial of the seriousness or even existence of Original Sin. If one does not believe in Original Sin, then there is no need for the Incarnation, the Passion and the Resurrection, the Church, the Sacraments, especially Baptism, and the entire life of grace given through the Sacraments of the Church.

The most common sin of the modern day is the denial of sin and the subsequent denial of hell. The heresy of universal salvation is believed even by some Catholics, including priests, one who teaches this from the pulpit not too far from where I am at this moment. How many people are going to hell because of this denial of the Justice of God, the Purity of God? (*see my post above on the Perfection of God).

One reason why it is so hard to be a saint in today's society for many people is that they simply do not believe in original goodness, a perfection which can be restored through Christ and His Church.

Mary is called by the Church, (and I recommend an excellent little book by Blessed John Henry Cardinal Neman on this—Tan Books re-issued it years ago) the New Eve or the Second Eve. That Mary was born without Original Sin, in fact conceived without Original Sin, makes her the new Eve. She is perfect as Eve was before the Fall, with all the graces and perfections of Eve before the Fall. 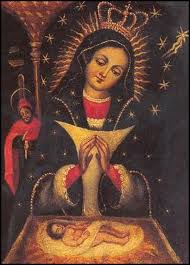 Mary is the Immaculate Conception. Eve was created without sin. But, Eve's fall caused all her children to live in sin, whereas Mary's perfection brought God into the world.

Here is a section from Newman's book: And so of the great Mother of God, as far as a creature can be like the Creator; her ineffable purity and utter freredom from any shadow of sin, her Immaculate Conception, her ever-virginity—these her prerogatives (in spite of her extreme youth at the time when Gabriel came to her) are such as to lead us to exclaim in the prophetic words of Scripture, both with awe and with exultation, “Thou art the glory of Jerusalem and the joy of Israel; thou art the honour of our people; therefore hat the hand of the Lord strenghtened thee, and therefore art thou blessed for ever.


Evolution, if believed by a Catholic, must include a belief in the original perfection and beauty of our first parents. Without this basic belief in the first parents and their state of grace, the rest of the History of Salvation, makes no sense.