ekathimerini.com and Europe This Morning

Posted by Supertradmum
An exit from Greece will cause Europe to lose 400 billion Euros.  Check out this link....Watch Spain, Portugal, Ireland, and even British banks are down today. Time for prayer. Germany is talking about "re-patriozing the banks." Nice, and that could have been done last year much more cheaply for all involved....

Some Comments on Bishop Morlino, Gingrich, Wisconsin, and the USCCB

Posted by Supertradmum
"This administration is giving us no choice." Newt Gingrich had an exclusive interview on EWTN in which he confronted the fact that if Obama is re-elected, there is a real chance of the Church being persecuted. The USCCB will meet this summer on religious freedom and the Church, and Gingrich pointed out that this meeting will be extremely important. I was watching this today and the Republican was very clear on the goodness of the Paul Ryan budget, which has passed the House, and which has been maligned by the still socialist bent of the USCCB, who do not seem to understand the difference between sensible cut backs and caring for the poor. The USCCB must move away from a socialist mind-set regarding the Bloated State. This, sadly, is the result of years of socialist influence in that bishops' group. Bishop Morlino followed and the subject of the budget came up. Now, I have followed Paul Ryan and his career for years, having lived in Wisconsin. I have heard him in person at a conference. Paul Ryan does stay in touch with Bishop Morlino and the Bishop said that he trusts Paul Ryan "as a lay leader, to make his own judgments in a sound way... and very much in accord with the Catholic Church."


Bishop Morlino stated that the Church is not looking for issues to which to respond, but that the USCCB is trying to respond to these issues. He stated that religious freedom must and most likely will get top priority. 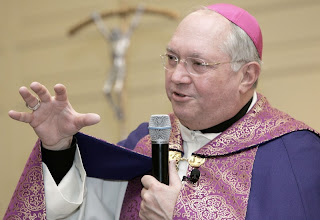 Bishop Robert Morlino had an excellent interview on the problem with the parish in Wisconsin, which is not the subject of this posting, but I recommend that interview, which also covered the Georgetown debacle with Sibelius, and the Catholic VPs stand on civil unions. The Bishop is an excellent leader.  The reference to the misunderstandings of Vatican II was clear as Bishop Morlino backed up Pope Benedict XVI's call to go back to orthodox Catholic teachings. Bishop Morlino is one of the best spokesman for Catholic teaching. God bless him.

Also, there is another link, a separate, but interesting subject--Rev. Wright.

Greekeconomics from a Catholic Point of View 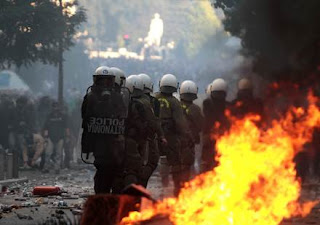 The Greek political leaders did not form a government yesterday through talks about the economy. From a Catholic point of view, several problems arise. First, a first historical points.

One, Greece has never had a large industrial base, but the people expect to live with a status of living like those countries, such as Germany, which still do. The country has relied on the service industry, like many other warm countries, and it has relied on loans.

Three, Greece has not, according the an expert on the Bloomberg Report, had property taxes. This is amazing. As one who has paid property taxes for the benefit of an entire community, my city, I find this almost unbelievable.

Four, Greece is experiencing a lack of creative leadership. This is obvious.

Five, the far-left parties, some of whom broke out of Eurocommunism, still hold communist ideals and really do not care if traditional capitalist forms of economy fail

What has this to do with Catholicism? Catholic social teaching has been based on the ideas of personal responsibility and inequality. Now, both of these ideas are missing from discussions in Greece. Pensioners do not want their pensions cut. This is understandable, but pensioners have taken cuts in other countries as well, including the States. My aged parents have taken cuts. We are not rioting in the streets, except in Wisconsin.

The idea of cut-backs causes pain and pain is part of life. My life-style is not a "high" as it was before the global economic crises around the world. Some of my friends have lost much money and had to down-size. Some people are not eating as much. Many of my friends in the States do not buy new clothes, but go to second-hand shops. Some have cut out vacations. I find that many Europeans refuse to consider these options, which are obvious to me.

The entire world is facing problems and to point to one group as if they are the only ones suffering is nonsense. The Greeks are very provincial in their outlook. They do not seem to me to be "Europeans" in the sense of wanting to identify with European values. What are these values, fast disappearing?

Catholic ones. The birth-rate of Greece is one of the lowest in the world. Out of 221 countries, Greece is 205, on a 2012 chart. The youth have not been able to take over their responsibility for taking over the infrastructure as necessary and, perhaps, the real leaders never saw the light of day through contraception, abortion. This is never discussed.

Catholic values include seeing the good of suffering. This idea is missing from modern Greece. Those who want austerity are fighting those who do not. Ireland, to the credit of the government, took bail-out money, but are meeting austerity measure guidelines. A lack of country-based industry or technological jobs, plus birth-control, plus the entitlement mentality has created a group who expect to get without work. I am astounded by those who were occupying and demonstrating on the weekend. All of them were dressed better than most, had jewelry, cell phones, nice hair, etc. No one interviewed on European television looked like a street person, or people suffering. Those demonstrating have not suffered enough not to buy middle-class goods.

Catholic values have meaning beyond the economic. Most people no longer define themselves outside of economics. Marx has won the mind battle.

Catholic values create unity, a true humanism, not division in a society. Again, class war-fare is not a Catholic value, but a communist one. Rioting, destroying businesses, breaking into jewelry stores and banks is simply not helpful....

Catholic values regarding social justice are based on the fact that each individual has value and something to do for the larger community. This idea of duty, whether civic duty or duty to the state as a responsible person is missing. In fact, one does not get a sense of a state with citizens who identify with such in Greece. This accounts for all the factions, and all the political parties, which are seriously fragmented. There is no real discussion, as ideologies have dominated all attempts at compromise.

Catholic values mean that merit and hard work are rewarded. This is not socialism. The moral idea of giving opportunity to all, including the poor, is a clue to free enterprise, which must be based on Christianity, which does not create the politics of envy. Free enterprise is about cooperation, not hatred or sloth. Socialism has been condemned by the Church for the reason I have listed on this blog earlier.

And, Greece is not alone. Spain is right behind Greece in the default, leave the euro-zone game. And, my friends in finance tell me that the collapse of Greece is a ripple in the lake, but the collapse of Spain will be a tsunami. Spain has many, and bigger problems than Greece. It is only a matter of time.